While scrolling through Reddit today, as I am wont to do, I stumbled across an image posted by a user named Thebuder89 and it made my brain do a full-blown backflip. It was a picture of a CD-ROM for the classic educational game, Putt-Putt Saves the Zoo. 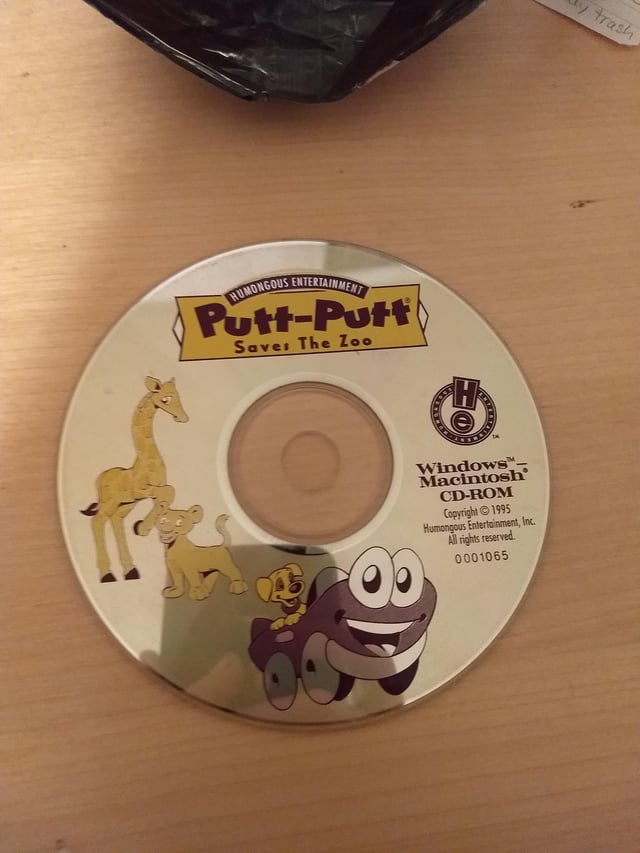 It ignited an inferno of memories from the days when classroom computers contained all sorts of educational delights. They were fun as hell back then, probably because we were dumbasses at the time, but I bet if you played them now they’d blow real hard, save for a couple.

So come on a magical journey as we remember some of the classics of schoolyard gaming, starting with the aforementioned talking car.

The Putt-Putt series is made up of a heap of games, but in terms of what you’d consider main titles, there are seven in total. They were point-and-click adventures in which you play a car named Putt-Putt, taking on different objectives like saving a zoo, for example.

I could have sworn Putt-Putt was named after the sound a stupid car would make, kinda like Brum, but according to Wikipedia, “his name was given to him by his father, who enjoyed to play mini golf”. What the fuck?

The Freddi Fish games were made by Humongous Entertainment, who also created the Putt-Putt games above, so it handles in a very similar manner.

I also have an issue with a fish being named Luther.

The first time I ever played Lemmings was on a school computer in year 3 and it was the fucking best. Heaps of tiny green-haired idiots just marching mindlessly towards death, waiting for you to save them by instructing the one in front to build some goddamn stairs over a bottomless pit.

I don’t know why this was on the school computers because it wasn’t all that educational, but it whips ass so who fucking cares?

Everyone remembers Zoombinis. They were little blue blobs with feet you had to guide to a safe land known as Zoombiniville (lazy name, but we’ll let that slide) by solving a series of puzzles.

The first title, Logical Journey of the Zoombinis, was released in 1996 and seemed to make its way into every school in the country. We all seem to have collective memories of that goddamn Pizza Pass level.

Bugdom, in which you play a bug, is a platforming game that’s by no means educational, but somehow came pre-loaded onto every Mac in my primary school.

The bug also wore a tiny pair of sneakers on two of its eight legs. Do with that information what you will.

The Magic School Bus started as a book, became an animated TV series (which was rebooted in 2017), then hit computer monitors as an educational video game.

I don’t remember playing the series at school, but I definitely remember smashing that shit at home when I was a kid. There were tons of games, each one exploring a different topic, but the human body and solar system ones were the best because stacking like a thousand Earths inside Jupiter and playing pinball in Arnold’s heart was fucking mad.

The Encarta series was the closest thing we had to Wikipedia before Wikipedia was a thing. It’s not really a game, but more of an interactive encyclopedia found on most school library computers.

I wouldn’t say it was “fun,” but pissing off the mean library lady by playing howler monkey sounds at full volume and passing it off as school work sure was.

Where in the World is Carmen Sandiego?

From memory, finding old mate was incredibly tricky, but then again, I was like 8 and therefore, an idiot.

I don’t remember playing any of the Reader Rabbit games, but the concept is pretty simple. You are a rabbit and you read. I refuse to say more.

I hated Math Blaster because I’ve always been incredibly bad at maths. All I wanted to do was shoot the goddamn space garbage but was continuously interrupted by a barrage of sums and multiplication.

If a real garbage man doesn’t have to solve somebody else’s math problems every time he chucks the contents of a bin in the truck, why should I when I’m zapping space junk?

Kid-Pix is essentially Apple’s version of Microsoft Paint with special effects and sounds. That’s about it really. It was dope.

Another game I don’t remember playing at school, but definitely played at home on dad’s computer. It was a puzzle game which gave you some materials and tasked you with fitting them together like a digital Rube Goldberg machine to complete an objective, like knocking a ball off a platform or something.

I would absolutely still play this game today because it whips sack.

Playing Sim City as a kid was about one thing – being the biggest asshole you could be. We’d build up a decent city and then turn on disasters just to watch everything crumble. Classic gear.

I vividly remember the primary school computers having Sim Tower and Sim Ant as well, which were, frankly, both rubbish.

When I was 11, I lived in Canada for a year and at school, this was the best game getting around on the computers. I’m not sure if it was around here in Australia, but I’m going to tell you about it anyway because it was sick.

The aim was to win races against some science jerk by collecting parts and building vehicles with them. You had to answer science questions every now and then, but it still kicked the shit out of Math Blaster.

I know for a fact I’ve forgotten a game in here that I remember playing but have no idea what it’s called. I’m sure I’ve left out others as well, but hey, what are ya gonna do?

I’m absolutely spending my night playing Lemmings and will have no regrets doing so.

Looking to play some of these classic games? Here’s how to do it.