CIA Data Leak Shows The Agency Has Been Investigating Emoticons

Wikileaks released an absolute fuck-tonne of leaked CIA data on Tuesday, the most disconcerting of which is their ability to hack your TV and smartphone with relative ease.

It’s not all terrifying, though. The leak also outed CIA employees as a bunch of colossal nerds, judging by the Dr. Who, Aquaman and Gremlins references they used when naming various programs.

But perhaps the strangest morsel of data published is a massive internal repository of ASCII emoticons. A bafflingly huge collection of them.

Aptly titled ‘Faces of the Internet’, the list was apparently a real bloody hoot in the office. “Oh thank you, you amazing human being,” wrote one user. Incredible.

And now, for your viewing pleasure, here are some of the best CIA-approved emoticons going around. Please keep in mind this list was created by people that could very easily spy on you in the shower through your phone without leaving their desk. 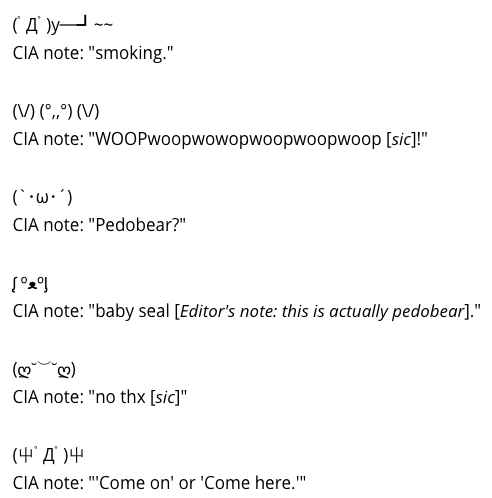 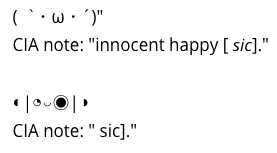 This is barely the tip of the iceberg, too. I guess even the CIA have to be abreast of the latest memes and text-based emoticons, right?

You never know when you’ll have to decipher a criminal message written entirely in WOOPwoopwoopwoops.