It’s been one whole week since Nintendo unleashed Animal Crossing: New Horizons, and I can say – with every little bit of me – that it’s absolutely taken over my life. I’ve started randomly speaking in Animalese, the language of the Animal Crossing characters. All I want to do is weed my island. Heeeeelp.

Dramatics aside, Animal Crossing has genuinely made my days in isolation less crap. Sure, I can’t actually go to the museum right now or head on over to my mate’s place for a cuppa and a bitta goss, but I sure as shit can do that in Animal Crossing.

For those unfamiliar with New Horizons, here’s the gist. You get a little deserted island, a house, some equipment, a phone, and you basically just chill. You can eventually build out your house and island however you like and you can decorate it however you want. It’s also your job to maintain the island and its many residents, which means saying hello to them every day. Sometimes in return, your neighbours will give you gifts that make no sense at all. I recently got gifted a tombstone. I do not know what to do with it. Is my neighbour going to kill me? I don’t know. Anyway, New Horizons is played in real time, which you will either love or hate. There is no between. And apart from doing little daily quests, that’s pretty much it. Life is simple and good, and every day it helps soothe and heal my soul from all the misery.

Now, to the friend date. If you want to visit someone else’s island / invite friends over, head to the airport on Day 2 onwards. Since I was inviting the gals to my island, I told Orville the dodo that I wanted visitors. From here, Orville will ask if you want visitors via local or online play. Select online play. Although, to go online you need a Nintendo Switch Online subscription, which means coughing up a couple of bucks. Local play only applies if you and your mate use the same wifi connection, which should not be an option BECAUSE YOU ARE PRACTISING SOCIAL DISTANCING.

If you and your mates are already Nintendo Switch friends, you should be able to link up in the game pretty smoothly. Alternatively, you can select the “Invite via Dodo Code” option which is good for one use only. Use this code to invite people who aren’t on your friends list.

Once this is sorted and your visitors are confirmed, you get this cute as hell cut scene. 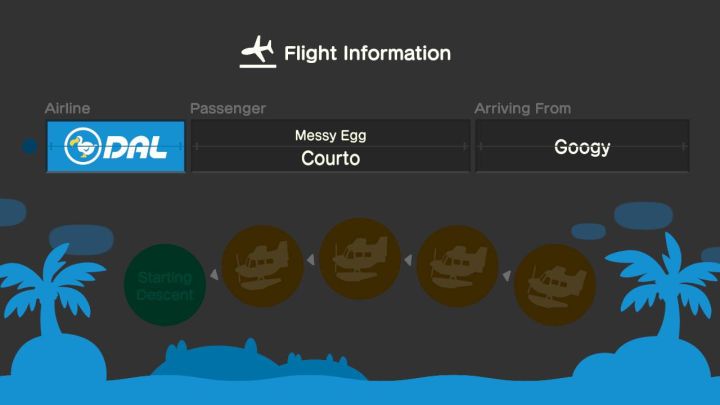 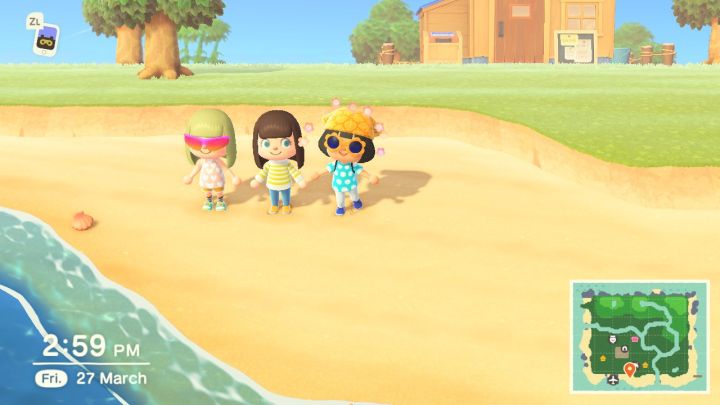 MY FRIENDS! MY BEAUTIFUL FRIENDS.

From left to right we have P.TV’s afternoon / night writer Lavender Baj, our music and culture editor Courtney Fry, and me, Steff Tan. Please do not judge me for my very basic clothes. The tailor, Mabel, just came to town and I’m not keen on any of her outfits yet, and I haven’t set up my NookLink either. Don’t yell at me! But Courto went for a shop and bought a new sweater, so Mabel was thrilled. Then I showed Courto my bamboo shrove and dug up some shoots for her, something I would absolutely do in real life for my good and precious friends. 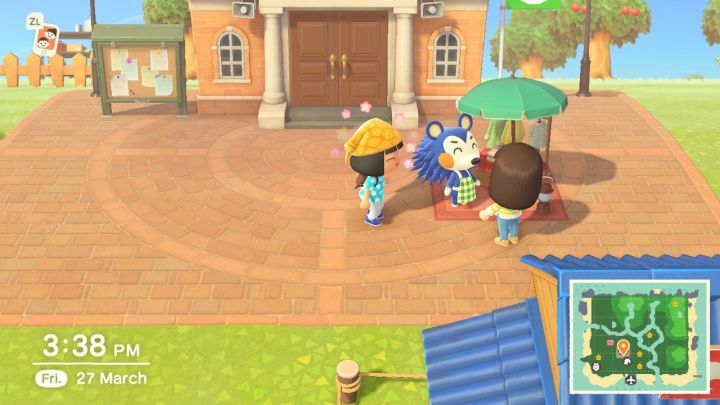 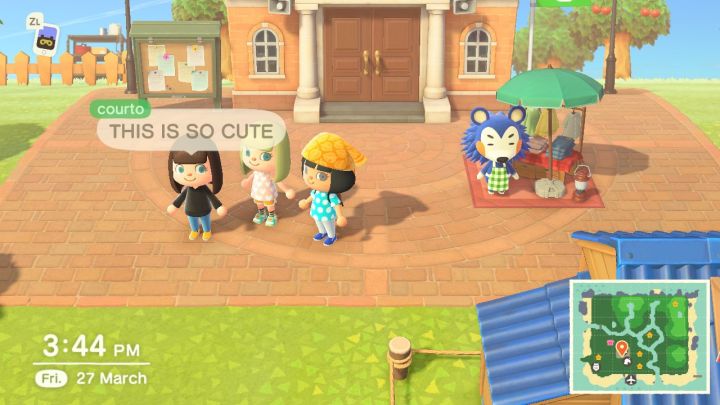 Thanks, Mabel. Love you, Mabel.

Then we chilled at the museum for a bit, which was extremely zen. 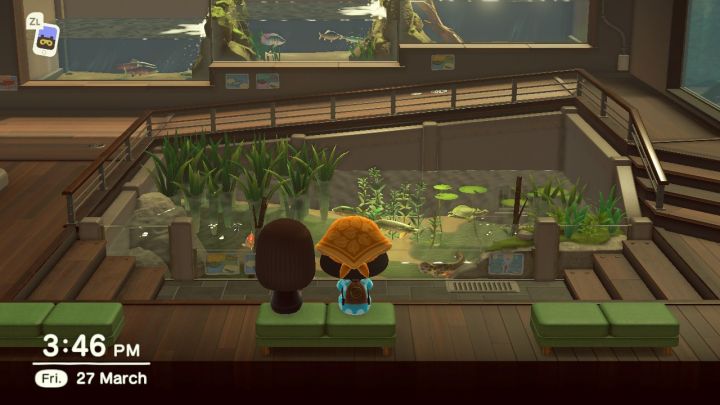 Ol’ mate Blathers will officially open the museum after you’ve donated 15 creatures or fossils to him. The museum whips ass and is a bajillion times nicer than the one in Animal Crossing: Wild World. 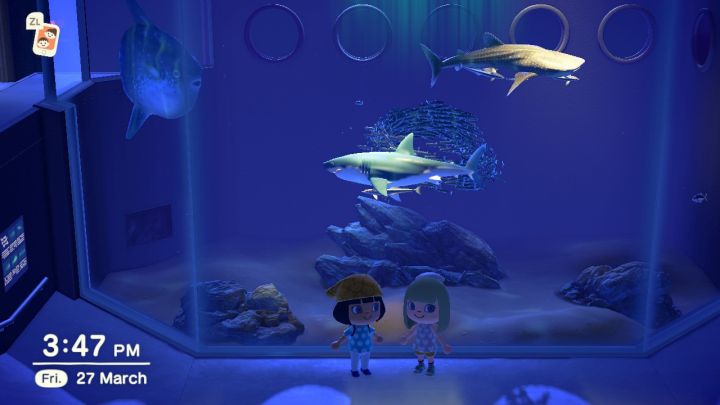 I don’t think I have any tips for fishing. Usually, I just dig around for manila clams, make bait, and then fish at night which is when all the cool fish come out like koi and the sharks. That big boy in the middle is obviously named Bruce.

Then, because we were still on the clock, our little gals trip came to an end. We said our goodbyes and wrapped things up for now. Will we immediately dive back in once we’ve knocked off for the week? Absolutely. I have bills to pay, fish to fish, bugs to catch, and an endless, unexplainable need to weed.

P.S. Have a bloody look at Courto’s joint. 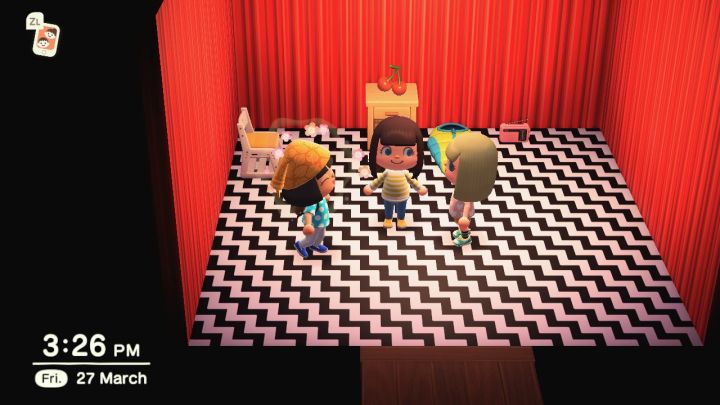 You can download custom designs through QR codes. Make sure you establish the NookLink connection between your copy of New Horizons and your Nintendo Switch Online app, which you will have to download if you haven’t already.