Are you in a public place right now? Are you by chance wearing eye makeup of any kind? THEN DO NOT WATCH THIS VIDEO. Because if you are, then you’ll end up very teary at your desk with mascara running down your face like this writer is right now.

Tony Marrero was in Pulse Nightclub when the horrifying mass shooting happened in Orlando earlier this year.

The shooting left 49 people dead, and many more injured. It was the worst mass shooting in America’s history. It was also a targeted attack on the LGBTQIA community, and occurred on ‘Latin Night‘ at the club.

Tony was shot four times in the back by the gunman, and once in the arm. His best friend Luis, the person who asked him to come to the club that night, passed away in the attack.

During his recovery in hospital, a friend of his uploaded a sign saying ‘I’m still swimming Ellen‘, and sent it to Ellen Degeneres. 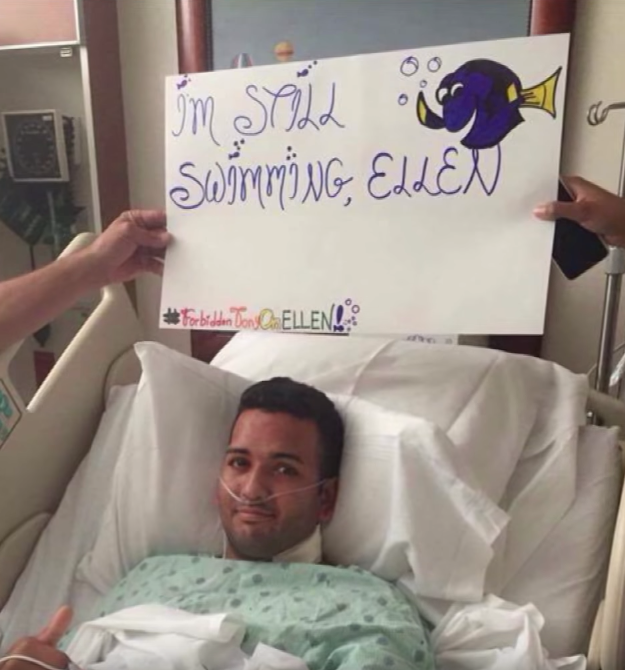 Now that Tony is fully recovered, the famous TV host had him on the show to talk about the heartbreaking experience.

She offered him a private screening of ‘Finding Dory‘ (he missed it when he was in hospital), and also donated $25,000 to a fund for the victims of the tragic shooting.

BUT THEN, she invites Katy Perry on to the stage after Tony explains that her song ‘Rise’ got him through his time in hospital, and he listened to it on repeat.

Katy walks on stage in tears, offers to pay for Tony‘s first year of film school, and by the end of the conversation, everyone on the stage and in the audience is hysterically sobbing.

AND YOU PROBABLY WILL BE TOO.

You have been warned:

Don’t try to save your makeup. There is no hope for it now.