Not with a bang but a whimper: the Victoria’s Secret show has called it quits after more than two decades of fantasy bras, angel wings and terrifyingly long legs.

It’s not exactly a surprise: Victoria’s Secret has been fending off accusations of exclusion and harmful body standards for a long time, and speculation over the future of the show – which no longer resulted in a spike in sales, and was watched by fewer and fewer people when it was broadcast on television – has been going for months.

In a conference call, L Brands CFO Stuart B Burgdoerfer said the annual show, which has been running since 1995, was “a very important part of the brand building of this business”, but that they were “figuring out how to advance the positioning of the brand and best communicate that to customers.”

I’m not particularly sad to see it go, but I will miss the weird nexus of hot people, celebrities, high energy, off-runway relationships and all out DRAMA the show brought. Nowhere other than a Victoria’s Secret runway show could you see a pint-sized pop singer almost clobbered by a six-foot model wearing fluffy pink angel wings. Truly iconic.

With that in mind, in no particular order, here are some of the best, most batshit or just straight-up gossip fuel moments.

Ariana Grande ducking for her life. 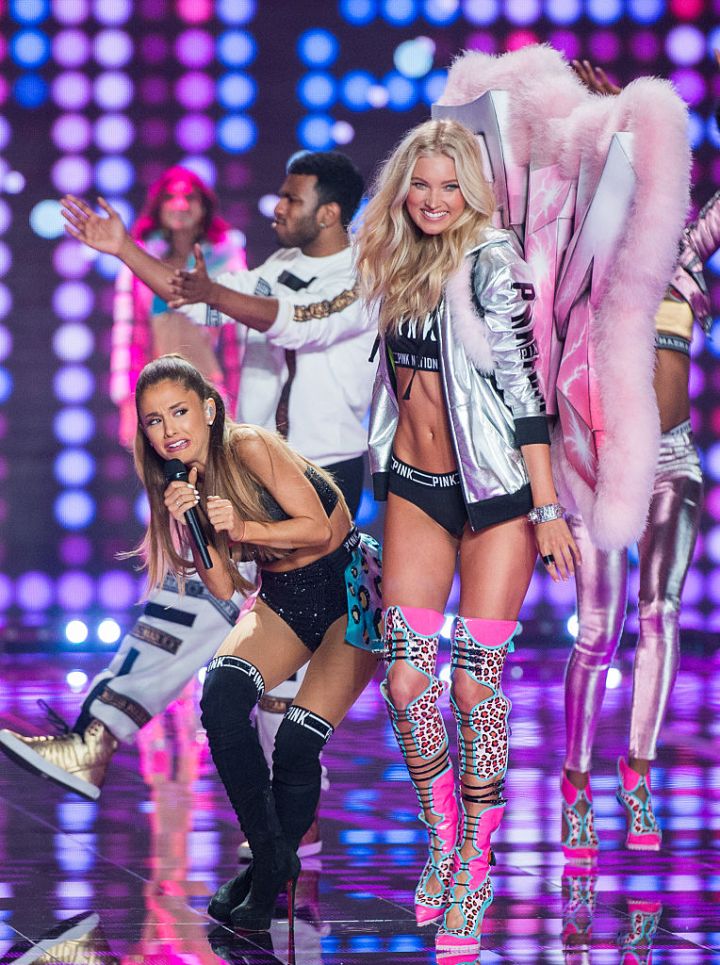 THE BEST. How can you compete? Ariana Grande performed at the 2014 show, and almost got taken out by Elsa Hosk‘s candy-coloured wings. A perfect moment.

Imagine the best possible situation to run into someone you just broke up with. You look hot. AMAZINGLY hot. Also, it’s a huge career milestone. You’ve worked hard for this, and are being justly rewarded. You are the centre of attention, and your ex is just there to support you. He’s there to make YOU LOOK BETTER, and there’s nothing he can do about it.

Anyway, I think about Bella Hadid strutting past The Weeknd at the 2016 show just after their breakup a lot.

Remember THAT whole mess? The year was 2012. Miranda Kerr and Orlando Bloom were still married, and Justin Bieber was an 18-year-old way too famous for his own good.

Apparently, so the story goes, Bieber met Miranda backstage at the 2012 show, and they got their flirt on. This was reportedly behind a huge almost-punch up in Ibiza. According to the tabloids, Bieber went over to Bloom’s table and taunted him about flirting with his wife, after which Bloom climbed over the couch and tried to clobber him.

Orlando missed, and was escorted out by security and his pals Leonardo DiCaprio and DJ Erick Morillo. He and Miranda split the following year, and now she’s married to the Snapchat guy.

During the 2018 VS show, Kris Jenner did what she does best: support her ultra famous daughters while also managing to upstage them at every turn.

The daughter in this case was (obviously) Kendall, and although everyone memed her walk, it was Kris Jenner going full Mrs George from Mean Girls in the front row that cemented its place in pop culture history. She is the celebrity mum we all deserve.

When you're not a regular mom, you're a cool mom @krisjenner #VSFashionShow pic.twitter.com/vGhSEokflW

Harry Styles dancing like your daggy dad after a few wines was the most wholesome moment in the entire VS show history. The world was still getting used to Harry Styles the solo performer (rather than Harry Styles the objectively hottest One Direction member) and WHAT an introduction this was. Huge dork energy. 10/10 would bone.

Funny, this is how I dance to Harry Styles too #VSFashionShow pic.twitter.com/COtTa5E3tN

If ONLY Twitter existed back then. Unfortunately, this was 2002, and therefore Tyra Banks graced the VS runway and shimmied, clapped, and sashayed her way down without it being blasted all over the internet. Instantly iconic. If only we had memes. 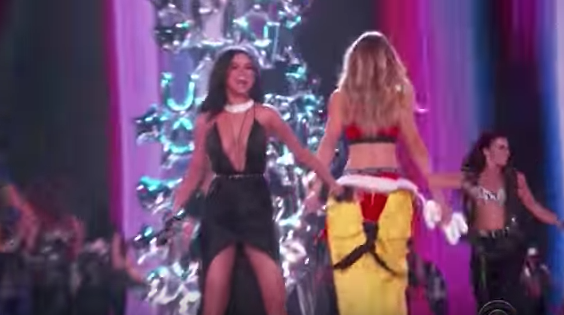 First of all, there was never any indication this was non-consensual, otherwise it wouldn’t be here. Now that we’re clear on that, in the 2015 show Selena Gomez slapped Gigi Hadid right on her derrière mid-performance, and the image has been seared into my brain ever since.

Former BBFs Taylor Swift and Karlie Kloss took their friendship to another level during the 2014 VS show, when they held hands and walked the runway together in coordinated black lacy lingerie. Technically, Taylor was performing at the show (rather than walking), but like…. when did that stop Taylor? It was a MOMENT. Anyway, fast forward five years and by all accounts, the two are no longer friends. Devastating.

Australians making it on the world stage is always a nice time. When former Dolly model search winner Miranda Kerr became the first Aussie signed as a Victoria’s Secret angel in 2007 – joining the ranks of Alessandra Ambrosio, Karolina Kurkova, Adriana Lima, Selita Ebanks, Izabel Goulart and Heidi Klum – it felt like we were finally competing on the world stage (or catwalk).

She retired her wings in 2013, after walking every single show since 2006 apart aside from when she was pregnant in 2010. (Guess the glory days of pregnant models walking lingerie shows, a.k.a. Slick Woods at Fenty in 2018, were several years off.)

It wouldn’t be a VS best of list without mentioning the Fantasy Bra, a jewel-encrusted ode to money worn on the ta-tas of the favourite model that year.

You could pick any of the multi-million dollar over-the-shoulder-boulder-holders here, but since Elsa Hosk’s US $1 million diamond and platinum draped-piece regularly tops the rankings, lets go with that. It’s not the most expensive (that goes to Giselle Bundchen‘s US $15 million one from 2000), but it IS everything I expect out of a diamond bra, which to be fair isn’t much.

It’s very pretty. Looks a bit uncomfortable. Could probably feed a small country for a year.