PEDESTRIAN.TV has partnered with Doritos to celebrate the launch of their bold Doritos Collide range by legit making two-headed sweaters for V. Day. Missed out on all the action? Get around their Snapchat filter on Feb 14th.

ICYMI, we partnered with our pals Doritos to release a range of two-headed Super Sweet Sweaters for Valentine’s Day – and they literally sold out within 24 hours. The collab was inspired by the explosive/bold Doritos Collide range, because the only thing more explosive/bold than flavours like Hot Wings & Ranch or Sweet Chilli & Lime colliding is the literal collision of two beings sporting the same piece of clothing during the month of love that is February.

Now, while the fact that they sold out so quickly is impressive in and of itself, that’s just the tip of the iceberg when it comes to the unbelievable details of how this campaign came to life.

Things happen fast in this lil’ ol’ industry folks refer to as ‘digital publishing‘ and our want to make these two-headed sweaters a reality for Valentine’s Day meant we were gonna have to go balls to the wall to get everything sorted for the big day.

After settling on a design, we had the first one hot of the production line in Los Angeles sent to a pal’s crib in its very own Uber. Our pal then flew with it business class (yes, it had its own seat) from LA to Sydney where we picked it up, brought it back to the office and took some saucy snaps of it.

That same day, it flew off to Melbourne for its shoot with the Angry Dad boys (BTS pics of that, as well as all shoots with ~influencers~ mentioned hereafter, detailed below) before staying overnight at the Olsen. It had a good night’s sleep before getting up at the crack of dawn to make the 8:55 AM flight to Tasmania – and then on arrival, it made its way to meet Georgia Love and Lee Elliott at the Festivale Food & Wine Festival in Launceston.

The sweater made its way back to mainland Australia the following day for its shoots with Kinder, Tori Levett, and Tindafella on Monday.

Yep, it really was a Sisterhood Of The Traveling Two-Headed Super Sweet Doritos Sweater situation – and now a few hundred-odd lucky folks have their very own version to take some banging ‘Gram content with on Valentine’s Day. Keen to see more? Have a look at the BTS pics from the several shoots we had with P.TV pals below. 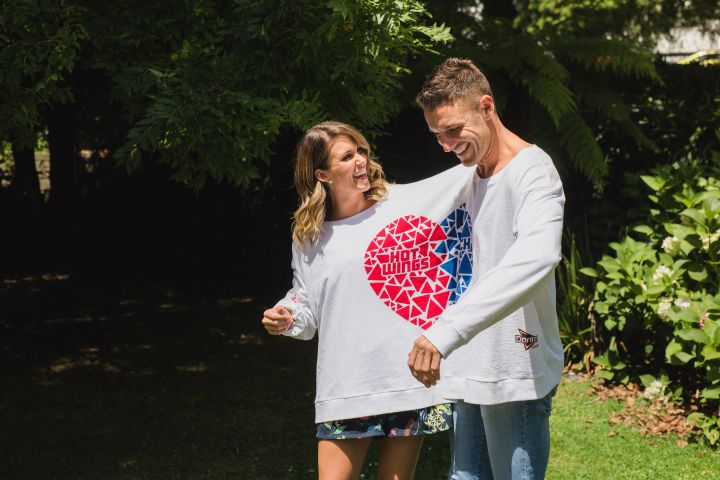 Georgia Love and Lee Elliott. A couple that needs no introduction.

We made ’em collide in their two-headed sweaters while they were at Launceston’s Festivale Food & Wine Festival – attendance of which is mandatory for Love’s nearest and dearest to the point where it’s now considered a tradition. GAH, AREN’T THEY JUST THE PERFECT COUPLE?! 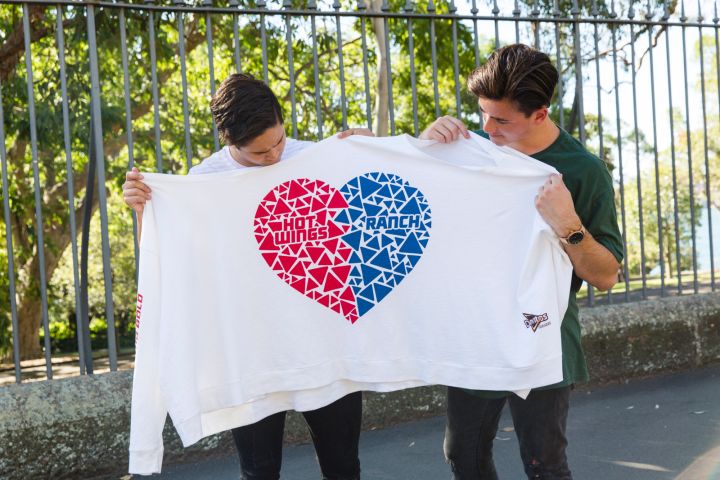 2018 has already been a huge year for the X Factor alumni/duo that is Instereo. Jakob Delgado and Chris Lanzon have received a lot of love for their latest single Cruel – and with that much love in the air, we had no choice but to see if they’d collide this Valentine’s Day wearing one of the super sweet sweaters. 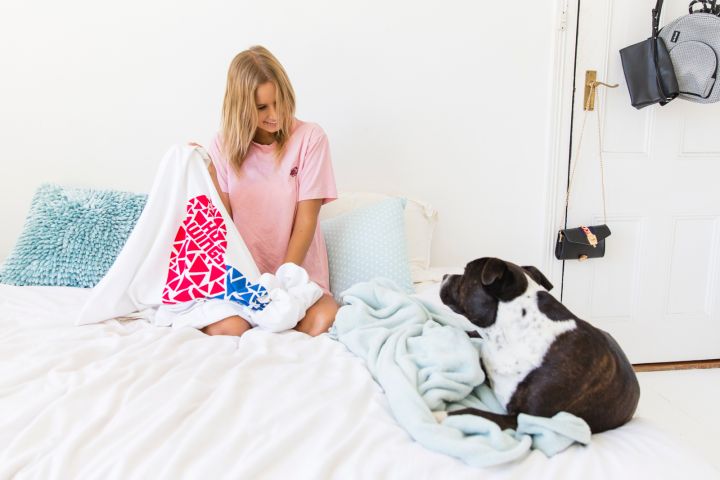 Banger merchant Tori Levett has been making some serious waves in the electronic/trap space – culminating in the independent release of her upcoming debut track Something Bad. Given that’s she’s supported bigwigs like Peking Duk and Party Thieves, we reckon it’s about bloody time.

Levett’s colliding with her doggo Buddy this V. Day – something we have so much goddamn time for. 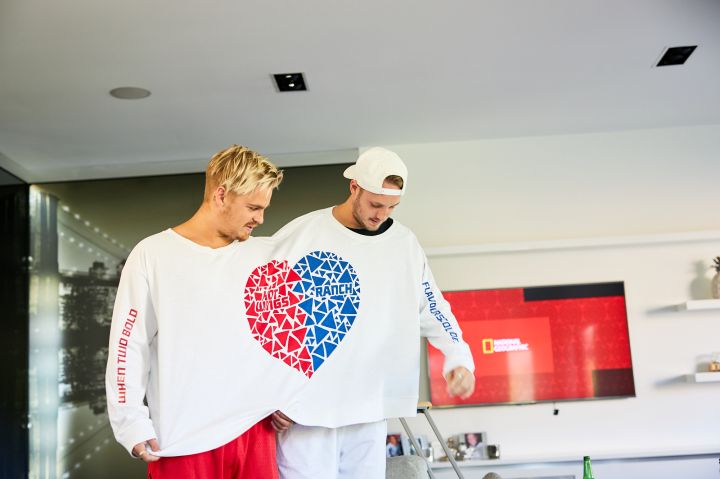 We caught up with the mischievous masterminds behind Angry Dad, Mitchell and Dylan Orval, at their home where all the magic began. Their mum only wishes she’d had something like the super sweet sweater for them when they were younger – and look, we don’t blame her. 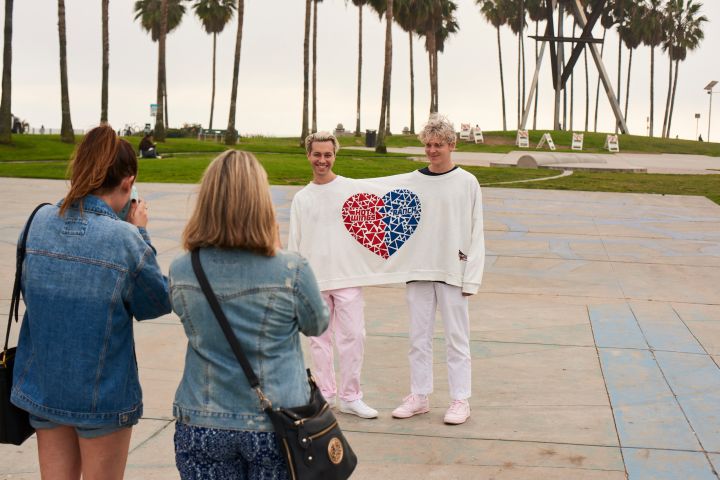 Tim Nelson and Sam Netterfield’s pop group Cub Sport has been exploding of late, but it’s not like we needa tell you that. We shot them on the iconic Venice Beach Boardwalk and couldn’t be happier with the outcome. Stop being so cute, pls. 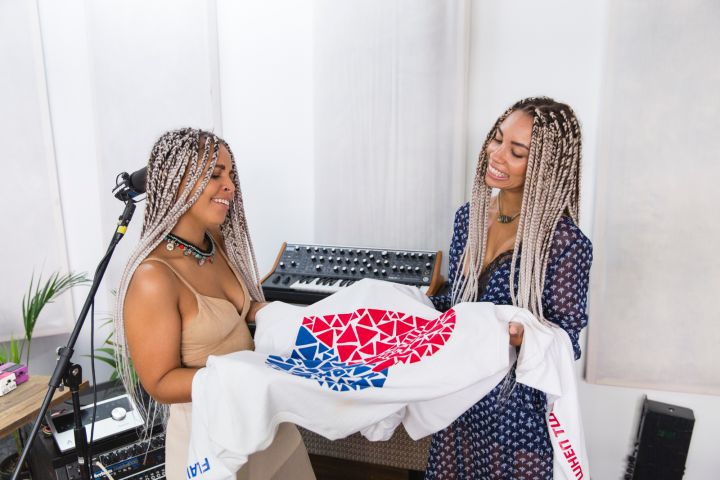 Sister act duo Kinder – comprising of Briony and Savannah – are on the up and up, folks. Having played big gigs like Splendour in the Grass, Groovin’ The Moo, Mountain Sounds as well as Alison Wonderland’s Scarehouse Project, 2018 is set to be a huge one for them. We caught up with them at yeahsure’s studios and were stoked to hear they’re a part of the Gud Vibrations tour alongside US acts Nghtmre and Slander. 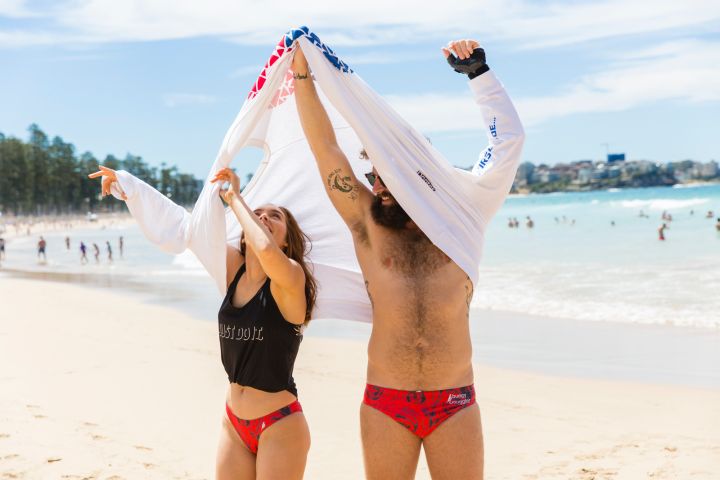 We caught up with Tindafella (AKA Jarrod Allen) and his GF Maddison Bonner outside of the Budgy Smuggler offices in Sydney’s Manly. Allen’s the head of R&D there and we were stoked to hear how far the iconic Aussie swimwear line has come since it’s extremely humble beginnings (i.e. they only realised the incorrect spelling of ‘budgy’ after they’d started cracking on with production and haven’t been bothered to change it since).

Once again, if you’re having withdrawals from not rocking one of the Doritos two-headed sweaters this V. Day, then get around their Snapchat filter to wear one virtually. Or head to your local grocery store to grab a pack of Doritos Collide to feel the love. Or both. Neither will disappoint.