We here at PEDESTRIAN.TV love a good pun. They’re a hallmark of our Facebook coverage and we get endless joy out of coming up with them – even the cringeworthy, Dad-level ones.

But there’s no shame in being beaten by the best, and in the pun-department we are well and truly outgunned by the mythical NT News, for whom a “Best Pun in a Headline” Walkley should be created, permanently awarded to, and named after.

The nation’s pre-eminent source of all croc-related news is a king of pun-work, and uh… they may have just used their skills in that department to lob a not-so-subtle front-page expletive at our Federal Treasurer.

Scott Morrison is one of those big political personalities that everyone has an opinion of (few of which are good). And his track record as both Immigration Minister and Treasurer has rightfully earned him the reputation of being just a bit of a bastard.

The NT News, noting that in ScoMo’s 17-month tenure as Treasurer he’s visited every state and territory of Australia except for the Northern Territory, used its entire front page to ask a simple question:

When, exactly, will they be seeing him head north? 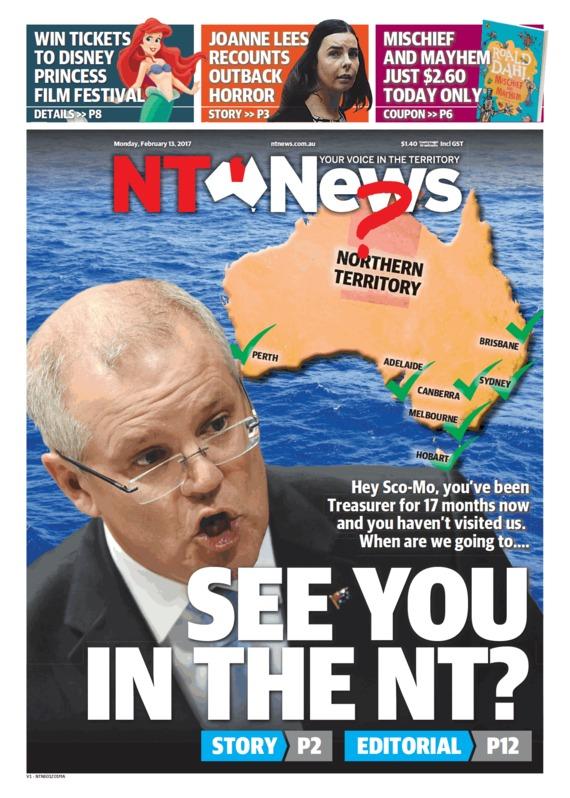 It’s ah… that’s a hard sentiment to argue with.

Now if ScoMo’s got any sense of humour in that potato-skin of a body of his, he’d make a quick dash up to Darwin next Tuesday.