It’s not just you, dear reader – it is indeed hot as balls outside, hot enough to fry eggs on things that really shouldn’t have eggs fried on them. In case you needed further evidence to back this up, data collected from weather stations internationally shows that yesterday, the 15 hottest locations in the world were all right here in Australia.

Overnight, a screengrab showing yesterday’s extreme temperatures was widely shared on Facebook, indicating a top of a scorching 47.5 degrees at the airport in Hay, New South Wales. The image appeared to have originated from a Reddit Australia thread, and when we did some digging for ourselves, we found with similar figures.

We checked the Leavening Weather Station website, which collects data from around the world and shows daily extremes of heat and cold, and below is a screengrab the data we found there. The figures are current as of 22:00 Coordinated Universal Time, or around two hours ago at the time of publication, and they show even more brain-melting temperatures. 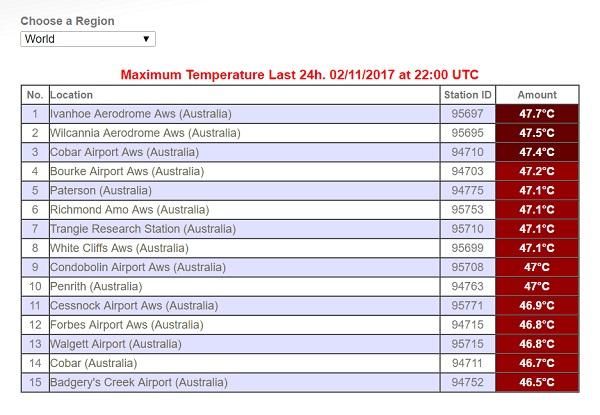 It’s always hot in Condobolin, the central NSW town where the man, the myth, the legend Shannon Noll spent his formative years, but yesterday, the mercury rose to an extra crispy 47 degrees.

The Bureau of Meteorology warns that severe heatwave conditions will continue along the east coast for the next several days, with an extreme heatwave predicted for northern NSW today. Keep cool, everybody.