Surely one of the most iconic and enduring pop culture representations of Yoko Ono is her brief appearance as Barney‘s new squeeze in The Simpsons – asking Moe for a tré artisté cocktail of “a single plum, floating in perfume, served in a man’s hat”.

Well, 23 years after that episode aired, someone’s finally confronted with the grim reality of the piece.

Ono is doing an exhibition at the Reykjavik Art Museum featuring a number of individual exhibits. One of them challenges local artists to provide a vessel for water to “give to specific people” which he outlined in a fairly vague brief:

My dear fellow artists, I want to ask you to supply a vessel for the water to give to specific people, either to heal their minds (such as in the case of warlords), or appreciate their courage in speaking out (such as in the case of grassroots activists). It can also be given to a specific person, people, or the land in desperate need for water (love). You and I will supply the water. Each work will be exhibited in the museum, with the dedication attached to it.

Ragnar Kjartansson, a performance artist known for his playful and dark work, submitted – of course – the plum perfume hat. Ono has dutifully entered it into the exhibition. 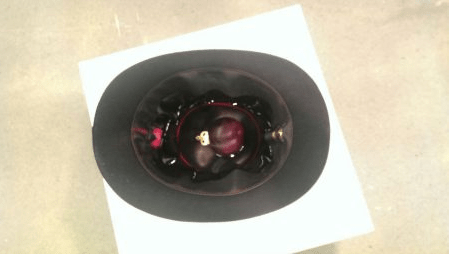