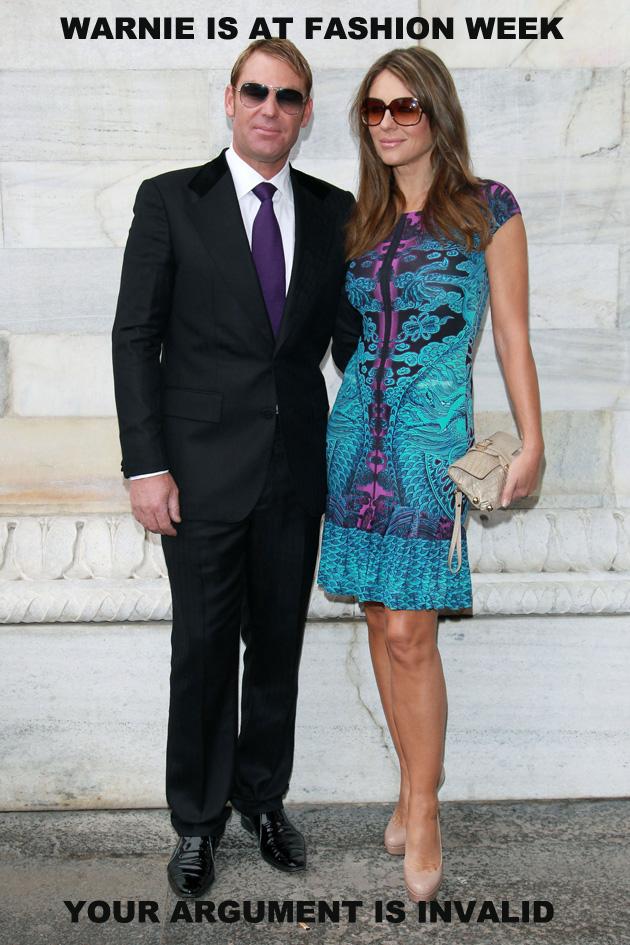 Warnie accompanied his betrothed, leopard print enthusiast and model Elizabeth Hurley, to the Roberto Cavalli show. Luke Leitch of the UK Daily Telegraph spoke to the self-proclaimed “fashion virgin” before the show about the evolution of his personal style [Writer’s Note: I can’t believe I just wrote that sentence in reference to Shane MF Warne].

Shane: “Well I suppose you’ve only been seeing me wearing Cricket whites all my life. But I have worn suits over the last twenty years. And Elizabeth always gives me good tips about ties, and shirts, and what goes with what, so it’s nice to have her help too.”
Elizabeth: “I have to say, in mitigation, that I have never gone shopping with Shane. And I have only ever given him a tie. So he’s actually chosen all his own clothes always.”
Daily Telegraph: “So if you give him a tip, he doesn’t have to take it?”
Elizabeth: “He normally does the opposite! I say ‘maybe grow you hair?’ and he says ‘I’ll run to the barber’s, then!'”
Shane: “Yep. It’s all my own fault. And thank you very much for noticing!”