Relax: Nutella Binges Won’t Give You Cancer, Despite Those ‘Reports’

But if you’ve been keeping abreast of recent news, you may have come across the alarming reports that the palm oil used in the beloved breakfast spread is… cancerous. 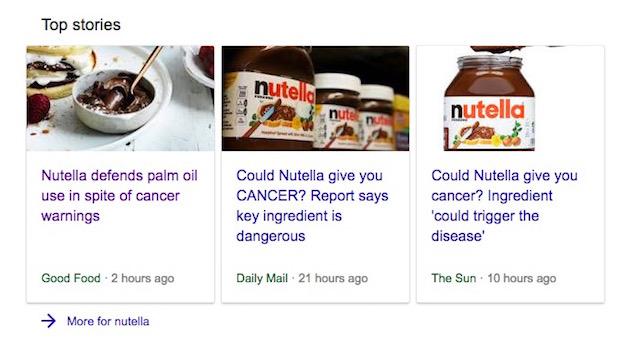 A report by the European Food Safety Authority (EFSA) declared it to be more carcinogenic than any other oil, following similar claims by the WHO.

wen u toying w death but you dgaf

The report, released in May, outlined that palm oil generated more of a potentially carcinogenic contaminant than other vegetable oils when refined at temperatures above 200 degrees.

When digested, GE has a tendency to break down and release glycidol, a compound strongly believed to cause tumors.

According to another report by the US National Institutes of Health, oral exposure to glycidol has caused tumors at many different tissue sites in lab mice and lab rats.

The EFSA report, however, didn’t recommend consumers stop eating it and said further study was needed to assess the level of risk.

Since the reports surfaced, Nutella manufacturer Ferrero have launched a big ass televised campaign in Italy insisting they use palm oil in a way that ain’t dangerous. They also claim that they don’t heat the stuff above 200 degrees, and that if they didn’t use palm oil, Nutella wouldn’t have it’s divine texture.

Alright, so cancer risk aside, isn’t the use of palm oil bad anyway?! For the environment?

Palm oil has become one of the world’s leading causes of rainforest destruction. In Indonesia, for the Sumatran orangutan has been pushed to the brink of extinction due to excessive deforestation. (Indonesia and Malaysia produce 86% of the world’s palm oil and while it is crucial to their economies, it has exacerbated climate change.)

Nutella has contained palm oil since its creation in the 1960s. Since last year, though, it has used 100% sustainable palm oil.

“Nutella can cause cancer” automatic banning of the product. Cigarettes on the other hand, LITERALLY CAUSES CANCER.. still on the market. ??

(with a mouthful of nutella) it what

TLDR; there’s been no conclusive evidence that Nutella is a carcinogenic, and they’re trying their dang best not to hurt the environment.

So, you can have your Nutella doughnut and eat it too.