Early this year, a 9 News desk was caught up in a whirlwind of accidental live footage, white shirts, and temper tantrums.

Yes, we are of course talking about Amber Sherlock’s HUGELY ICONIC meltdown over her, a colleague, and a guest all wearing white shirts during a broadcast.

It was a glorious story. It truly was. We thought to ourselves, ‘well, it’s a lesson to be learned, they’ll never do that again!’.

But maybe not, because in a story on Monday night, Sherlock was joined by fashion writer Kellie Alderman, and Adelaidean colleague Kate Collins.

Collins clearly got Amber‘s Very Important Wardrobe Memo™, but unfortunately Kellie did not. And she rocked up wearing the exact same colour top / dress that Sherlock was. 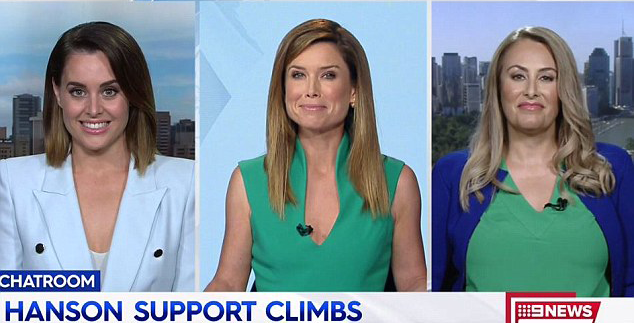 Entertainment reporter Peter Ford was one of the first to point out that Alderman is wearing a seemingly mismatched blue jacket over her dress:

Random question. Do we think someone was politely asked to put on a jacket this afternoon? pic.twitter.com/Fojta8g4JD

And plenty of others noticed too:

Reckon the bird on the right was told to put on a blue jacket? ??????#9NewsAUS #ambersherlock pic.twitter.com/ancfkLjzfv

Hi @AmberSherlock,
Did you make her put that jacket on, or is blue on green “a thing”. #JacketGate pic.twitter.com/EwCzugOtY7

Do we have another put a jumper on #colourclash @AmberSherlock @9NewsNOW #chatroom definitely looks like a blue cardy cover-up ?????? #9News pic.twitter.com/YYO9WNx6ls

I wonder if there’ll be footage of @AmberSherlock going postal over the two green outfits??? https://t.co/d4H3tTiOMl

While some thought that Sherlock’s wardrobe/set demands were getting even worse than the ‘white shirt’ incident:

I’m guessing that @AmberSherlock asked both her colleagues to change the colour of the sky in their respective city @9NewsAUS pic.twitter.com/HnGf0YifBL

There’s no comment yet (obviously), but we’ll let you know. Bless you all for your very good jokes.