You and I both know that ‘Stranger Things‘ is perfect, I don’t need to tell you that. It was the perfect blend of 80s summer blockbusters and weirdo John Carpenter late night vibes, and it was so perfectly what I wanted from television that I may never watch another show.

The setting and the pastiches definitely lend the show to some sort of pixel-y adventure game and we’ve been teased before when a game dev knocked up a mockup of what that could possibly look like, and now we’re getting ever closer.

The fine folks at Infamous Quests have blessed us with what I guess you would call an adventure mini-game – a point and click set in a single scene from the show, with Chief Hopper investigating the pipe leading to the facility, looking for clues and interacting with his fellow officers. 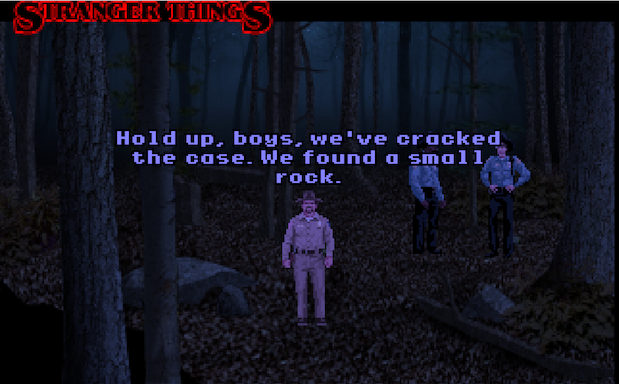 If you’re keen to make Hopper smoke some cigs and shine a flashlight at people, you can download the teeny tiny game here.