The Met Gala 2021 is here, meaning it’s time for all of us to wipe the toast crumbs off our trackies and play “did this celebrity nail a theme I only just thought about or not?”. The theme, by the way, is In America: A Lexicon of Fashion, which is kinda vague and unfortunately pandemic-inspired. The co-chairs this year are much more exciting: Timothée Chalamet, Billie Eilish, Amanda Gorman, and Naomi Osaka. It’s the Gen Z team of dreams.

READ MORE
The Internet Is Going Bonkers Over The 'Leaked' Met Gala Seating Plan, And For Good Fkn Reason

The Met Gala 2021 theme celebrates the fact that “New York is back”, Vogue editor-in-chief Anna Wintour said on the red carpet. There’s a number of young designers included, who “represent a whole patchwork of America”.

Let’s get into the FASHION, shall we?

Don’t hate this! Anna Wintour is never the most exciting red carpet moment, because she’s there to oversee her hand-picked guest list / the entire event. But this is fun, dramatic, and if we were going by Australian seasons, it’s FLORALS FOR SPRING. But I suppose it’s autumn (or “fall”) in America. Anyway, groundbreaking.

TRUST beautiful boy Timmy to combine a double breasted jacket with chucks and trackies. This is Zoom fashion on steroids: professional up top, comfy on the bottom.

Call it the Schitt’s Creek effect: Dan Levy is at the Met Gala, and he is doing the MOST on the red carpet. It looks like two men kissing against a map of America? On theme, on fire, 10/10.

Does the name Amanda Gorman seem familiar but you can’t quite place it? She’s the poet who performed at Joe Biden‘s inauguration, and went viral. (Love that a poet can go viral in the year 2021 tbh.) Of course she’d be invited to co-host the Met Gala, and this look is serving. 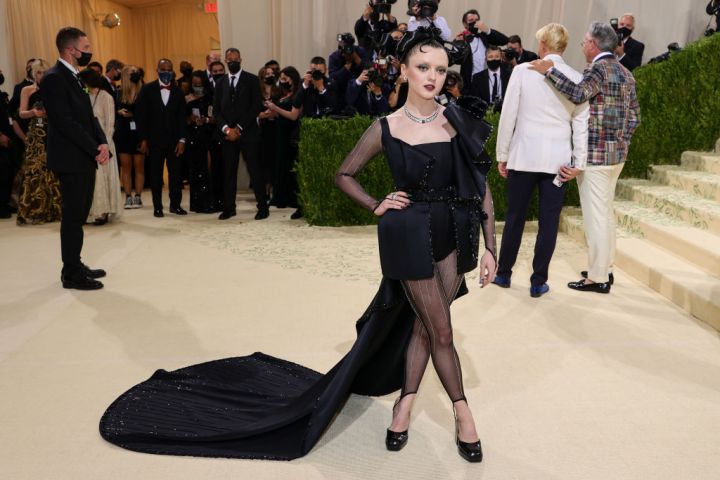 WHO GAVE ARYA STARK PERMISSION TO GO THIS HARD? WHO? No idea if it’s on theme or not (it’s honestly too hard to tell with some of then until they start giving interviews), but Maisie Williams is looking flawless. 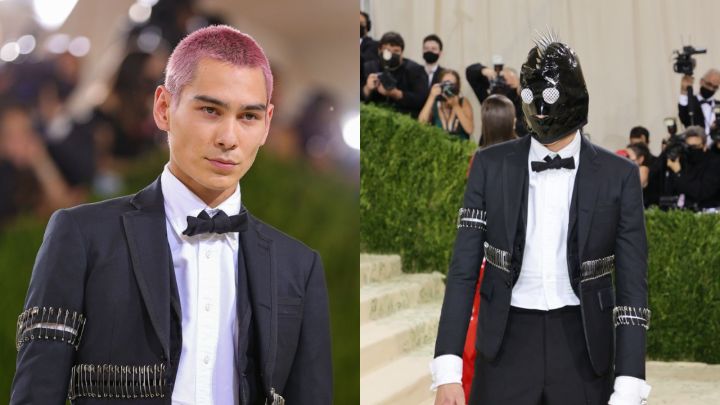 Gimp masks are becoming the hottest 2021 red carpet trend. First we had Kim Kardashian, now Gossip Girl star Evan Mock. When you’ve spent 18 months wearing a face mask, this is the only way to kick it up a notch. Three years ago I would have sent anyone who wore shorts to the Met Gala to the naughty corner, but now I can’t get enough. Love love love.

Billie is a VISION. Her Marilyn Monroe era is an endless parade of smouldering looks, and this is no exception.

“I always wanted to do this, I was just scared,” Billie told Vogue live-stream host Keke Palmer about her über glam / old Hollywood sex bomb look. “I didn’t feel comfortable in my skin.” 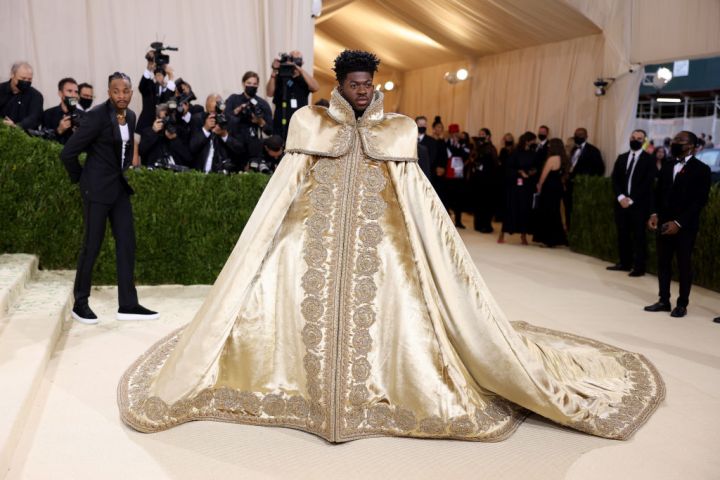 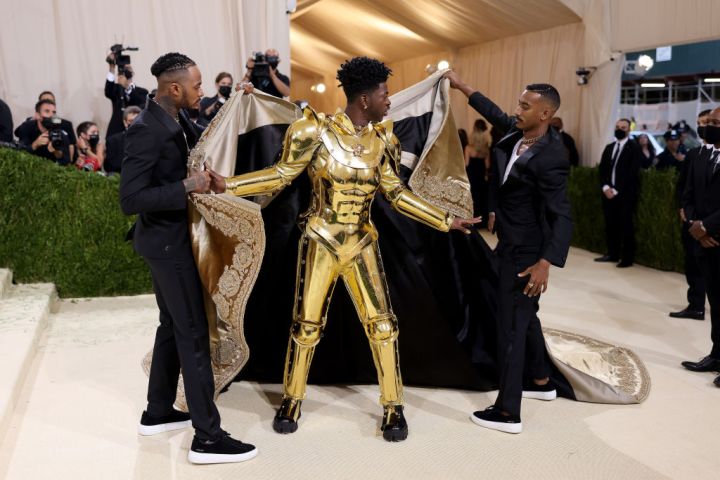 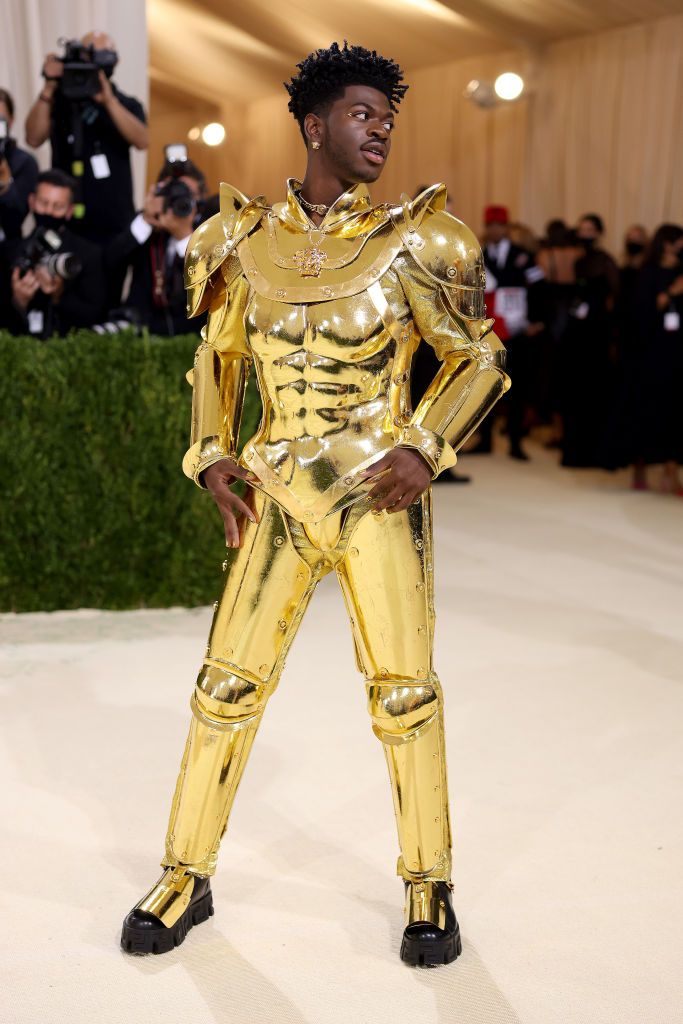 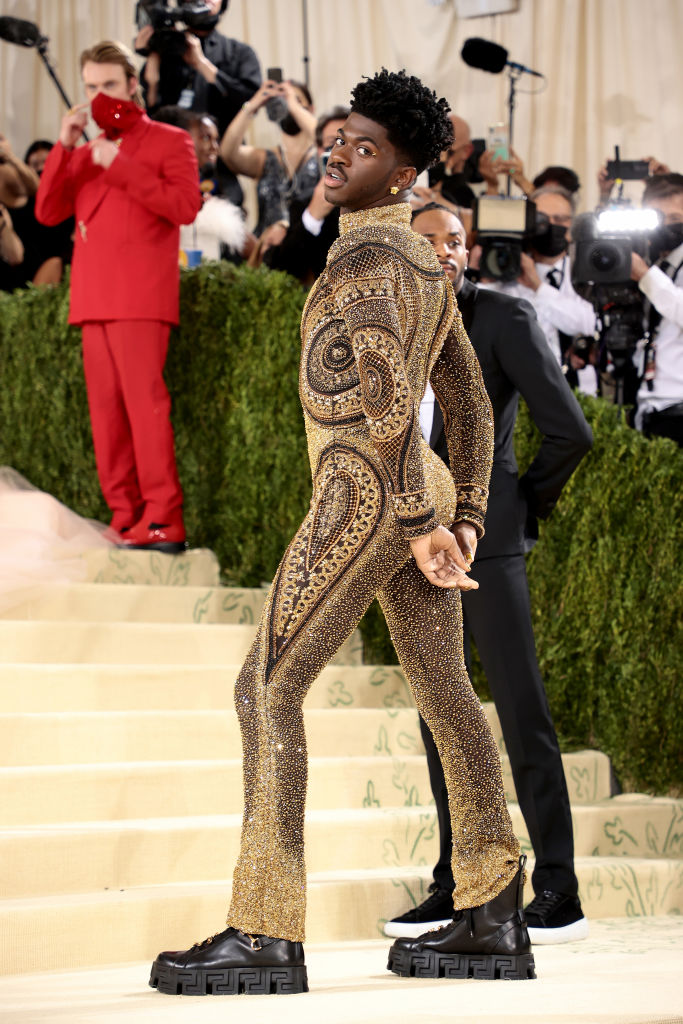 Lil Nas X took us on a JOURNEY. Very reminiscent of Lady Gaga at the 2019 Met Gala, or any Drag Race runway since like 2017. Honestly my fave thing about this is the final outfit looks pretty comfy, which is not something you could say for 99% of other Met Gala looks.

Grimes brought a sword and a… bible? Honestly even if she’s not on theme (and I have no idea how swords are American), she’s on the Grimes theme.

Serena Williams is a big, beautiful, tropical bird. Or: what I thought fancy dress looked like when I was five. If you can’t wear an ombre ostrich feather cape on the Met Gala red carpet then WHAT, I ask you, is the point.

Kaia Gerber looks stunning. It’s as simple as that. It’s not an OTT Met Gala fashion moment but it’s unbelievably beautiful and for that, we’ll allow it. (Lol who’s asking us? No one.) The makeup, the hair, it’s just perfection. Prepare to see this beauty look pop up on a bunch of “how to” YouTubes, which I WILL be studying closely.

I could be wrong, but I think this is Elliot Page‘s first red carpet since coming out as transgender. It’s making me emotional. Love this simple look for him. When you’ve spent most of your life not living as your authentic gender identity, the chance to go classic masculine with a black tux must be such a powerful moment. Love! Could not love it more!

The Met Gala is the east, and Iman is the sun. She never fails to light the Met Gala red carpet on fire, and 2021 is no exception. Is it on theme? Who cares, Iman is the theme.

Kim Petras came as a horse girl. The pattern of that dress is stunning, but unfortunately no one will remember or even notice is thanks to the GIANT HORSE HEAD sticking straight outta her chest. The horse’s tail is a nice touch, I suppose. I feel like a few celebs took the “camp” theme of the 2019 Met Gala and just kept running with it, and Kim Petras is case in point.

The TikTok star-turned-Netflix star took inspo from classic American looks, so at least she’s on theme! Addison Rae teased out pics of stars in red dresses – including Marilyn Monroe and Julia Roberts in Pretty Woman – before her arrival. Social media queen knows how to create the buzz, and in other news, water is wet.

BRB, picking my jaw up off the floor. Eiza González is another one whose beauty look I’ll be attempting to recreate, and then wonder why I don’t look like Eiza at the end. Ah well.

Frank Ocean rocking up with a green alien baby? Serving us Area 51 vibes, which in turn is serving me Sims 2 Strangetown vibes, which therefore makes it on theme, to me.

I wasn’t sure what to expect from Megan Fox after her naked dress at the VMAs yesterday, but DAMN. GOOD FREAKING LORD. It’s hot, it’s glamorous, it’s unexpected, and that, to me, is American. Well, it’s a type of American, so fuck it, on theme.

Now I’m not saying I hate this look from Lorde. It’s stunning! And slightly weird! Just like she is! But the Heavenly Bodies Met Gala theme was in 2018. Lorde, sweet angel, you are three years late. But I guess, as a Kiwi, Lorde saying “fuck you” to the American theme is funny in and of itself.

AOC wearing a dress that says “tax the rich” to the Met Gala, where tickets are rumoured to cost about US $35,000 per person? THE most American thing I can think of. Obvs no shade to AOC, she’s probably not paying for her own ticket – and this energy from her is amazing.

J.Lo came to the Met Gala straight from Beyoncé‘s 2016 ‘Formation’ video clip. My only disappointment here is that Ben Affleck isn’t on her arm, trying to stick his tongue down her throat. Bennifer forever, I don’t even care if it’s for the publicity.

Kacey Musgraves always keeps it fresh and unexpected, and I honestly love this. It’s a little bit space cowboy, a little bit Glastonbury, and 100% a vibe.

Okay, look at these cuties. Justin Bieber is wearing his label Drew House, and I missed who Hailey Bieber is wearing but I’m sure it’ll pop up on a million fashion TikToks in the next week. She’s the epitome of elevated basic style, and that’s not a bad thing at all.

Okay first of all, YES, love. It’s fun, it’s glamorous, I have no idea how it’s “American” but Olivia Rodrigo is the American soundtrack right now. My only critique is that it feels a little bit like she came dressed as Bella Hadid from the 2017 Met Gala. But fashion evolves, I guess?

This is Cara Delevingne‘s best ever look, and that’s the tea.

Kim, just say you’re back with Kanye and go. Also, genuinely impressed she made it up the stairs without tripping? I’d be ass over tit in 0.2 seconds.

It’s chaos but I love it. Apparently this dress weighs 40kg, so thank god Simone Biles is nearly all muscle. Giving this one a perfect 10.0 score.

Don’t have the words, I’m still breathing into a paper bag after thinking these two wouldn’t show up.

I would let these two run me over with a truck. That’s all.

My main thought here is what an absolute sweat monster Kid Cudi‘s ass would be in those pants. Outside of that – matching your hair to your shoes? Sure, why not.

It’s not a Met Gala without at least 50% of the Jenners and Hadids in attendance, so thank you to Kendall and Gigi stepping up for the teams this year. Kendall looks… fine? We’ve seen this look a million times before at Met Galas, but it’s not offensive. Gigi is giving me more of that old Hollywood glamour, and it’s definitely a vibe.

I’m getting major Carrie Bradshaw in the early Sex and the City seasons from this dress, meaning Lily-Rose Depp is somehow both serving Y2K realness and camp (which was 2019’s theme). Look, if you’re gonna wear this dress anywhere, it’s the Met Gala! But please, oh god, can we all quietly agree to stop low rise anything coming into mainstream fashion from now until eternity.

Naomi Osaka is thriving, and we hope she continues to thrive. This is everything a Met Gala look should be: fresh, unexpected, on theme and daring. A queen.