ksubi Teams Up With Target On KIDS Range

Confirmed earlier today on the label’s Facebook page (and in the back pages of today’s Telegraph), denim doyens ksubi have announced that they’re collaborating with Target on a KIDS line as part of the retailer’s Designers for Target range, which in the past has seen collaborations arise with the likes of Dita Von Teese, Stella McCartney and the soon-to-be-released hot leopard mess that is Roberto Cavalli x Target.

The announcement also comes off the back of tsubi/ksubi co-founder George Gorrow announcing he would be leaving the brand he helped co-create twelve years ago. Gorrow stated that based on the strength of the label’s most cohesive collections to date, ‘W.A.R.’ and ‘Bad Sports‘, and presumably safe in the knowledge that this collection would provide a fitting legacy, he felt safe in leaving the label on a high note.

As per the Telegraph, creative director Mikey Nolan said “We’ve always acted like a bunch of overgrown kids, so it all came scarily naturally. Obviously we had to make sure we were very careful to always keep a playful tone to the artworks and use positive messages. And we also tried to keep the collection gender neutral.“

The collection will consist of ksubi’s signature denim, shorts, hoodies, tees, dresses and adorable jumpsuits worn by the likes of this little nugget of awesome in the graffiti apron onesie overall dress thing. 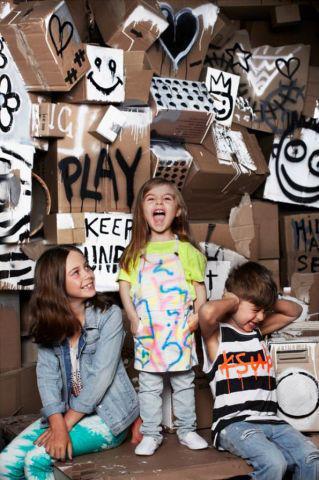 Nolan continues, “We wanted pieces that endure and can be passed down the generations from brothers to sisters. We were blown away by the quality they were able to achieve and it’s at a great price point.”

Being chic on mufti days has never been easier, amirite 8 year olds?! KIDS lands in stores in November. Not that any of you will likely be wearing it, but those of you with impossibly stylish children will no doubt be ready to rip. Did you get that? Rip, like ripped jeans? Cool.