Julia Gillard stars in a photo shoot for the new issue of The Australian Women’s Weekly, the premise of which has the PM perched on a stuffed armchair serenely knitting a toy kangaroo for the imminent Royal Baby spawned by Prince William and the Duchess of Cambridge. This is that photo, featured today on the cover of The Daily Telegraph: 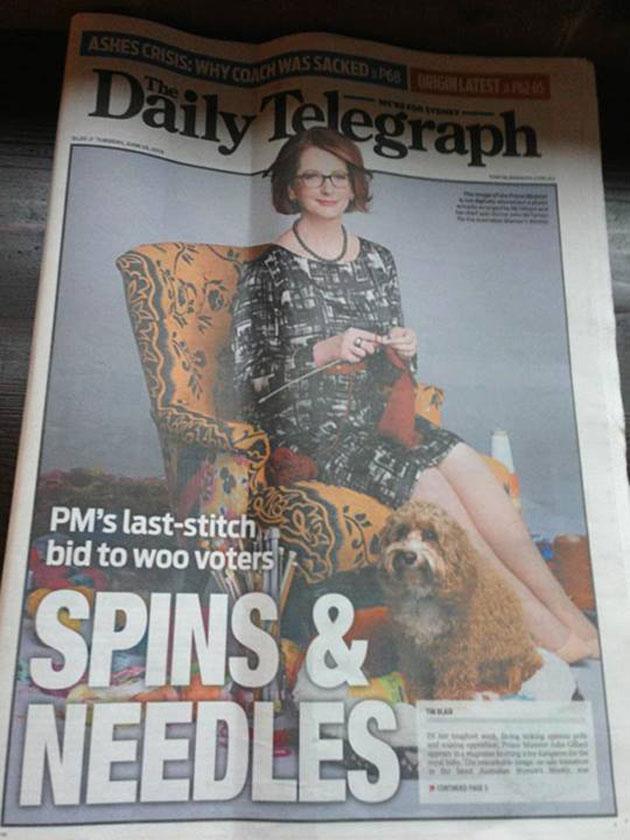 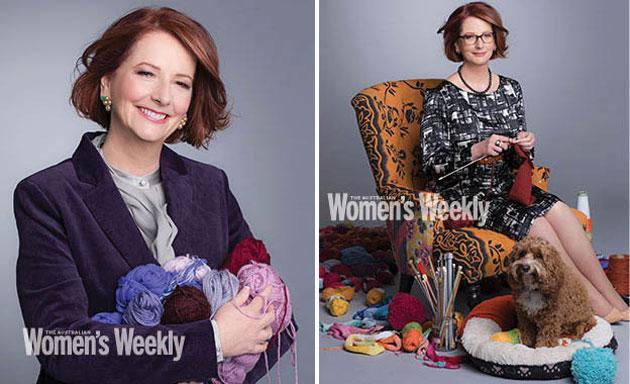 Over the past 12 months Ms Gillard has lost considerable ground in national polling, and with the federal election looming it’s do or die time if she’s to regain the ground needed to retain her Prime Ministership, come September.

In terms of public confidence, Ms Gillard knows she needs to polish a dulling turd so it shines bright like a diamond and, in addition to appealingly topical Game Of Thrones references and good-naturedly copping edible missiles on the sleeve, the best way to do that is with a personal brand makeover involving a kewt poodle hybrid and on-trend crafting.

The shoot shifts the PM’s identity to a ‘domestic nurturer’, a far cry from the steadfast party leader who we’ve seen laying smack down in parliament and aggressively palm off suggestions she relinquish the leadership. The question is, what’s the strategy at play here? Let’s consider some possible options.

1. Who doesn’t like dogs? There is no better species with which to align yourself than dogs except maybe for baby dolphins.

2. Is this a concerted effort to win favour with the families-housewives-babies demographic (under the assumption that that group is subtlety-challenged. Come on, knitting indoors with a fluffy dawg? It could be a shameless bid for the apartment-living young family crowd)? The fact Ms Gillard isn’t married and doesn’t have kids could prevent that section of the voting public from relating to her. What would she know about real world issues like the concerning state of childcare, head lice outbreaks and being elbow-deep in human poo? The ‘at home’ feel of the shoot positions her more as an accessible ‘every-person’ and less as another mouthy pundit in a suit (albeit in a way that makes her seem like a patronising caricature of the intended vibe they’re going for).

3. Knitting is a recurring motif in Dickens’ A Tale of Two Cities. In the story it’s used as a symbol for the common people of France – the working class revolutionaries, living under the unjust tyranny of the wealthy aristocracy. Madame Defarge literally knits a registry containing the names of aristocracy she wants to see dead, providing a fascinating juxtaposition between her vengeance-driven blood lust (violence being a traditionally masculine attribute) with a harmless inconspicuous pastime typically associated with women. Like Dickens, could Ms Gillard be subversively employing the knitting needles as a symbol of her forthcoming election campaign against the unjust (sexist?) tyranny (icky erotic fiction speak?) of opposition leader Tony Abbott? Yes. That’s probably it.

4. I can attest to the fact that KNITTING IS REALLY HARD, you guys. Maybe Ms Gillard just wanted to show off the fact she can convert a ball of one-dimensional yarn into a nontoxic plaything in the likeness of the largest marsupial surviving on earth today and popular Australian icon?? It makes her look practical and competent.

5. It’s textbook styling, dreamed up by a frothing publicist with dreams of creating the ultimate ‘iconic’ image: Julia cradling half the yarn store is like the equivalent of John Howard leaping about in his green and gold tracksuit. If anything it works as a keen invitation for media flutter, if for no other reason the girth of puns to needle with, such as “PM Stitches Up The Opposition”, “Gillard Pulls Wool Over Your Eyes”; “ALP A Bunch Of Knit-wits?”; “Weekly Spins Good Yarn With Top Poli” – you can think of better ones.

6. Or maybe it’s like she told the magazine: “I just thought it would be a cute project to work on.”