This morning, columnist Bernard Salt issued a kind of explanation for that opinion piece in the Weekend Australian. In his view, a paragraph insinuating Australia’s youth precludes itself from the housing market ’cause of overpriced smashed avocado brunches was taken wildly out of context.

Salt writes the piece was obviously satire poking fun at his own generation, and he urges the “social media community to check primary sources (such as reading my original column) to establish context and intent before becoming outraged at a selected and repurposed paragraph.”

Well, at the risk of making the same mistake, let us clarify something right now: this article, right here, is completely earnest.

It is very, very difficult to read Salt’s original piece as satire when it conforms so precisely to the prevailing narrative of Millennials as lazy and self-entitled. It’s even harder to take the column as a joke when his target audience – Boomers – also took it at face value.

Make no bloody mistake, it wasn’t only the milk-crate sitters of Australia who saw Salt’s words as a withering judgment of anyone who deigns to keep their money away from a home deposit.

A cursory glance of responses to his latest piece reveals a sincere belief that we’re entirely self-absorbed, and our frivolous purchases are solely to blame for our exclusion from the housing market:

Then, there are the commenters who took potshots at our comprehension skills. Pretty rich (like some quality feta, amirite?) considering Salt supposedly just told ’em it was a pisstake:

And then came the users who used the opportunity, once again, to judge our circumstances against the economic realities of their youth. We don’t mean to diminish the hardships earlier generations may have faced, but those circumstances existed, quite literally, a lifetime ago: 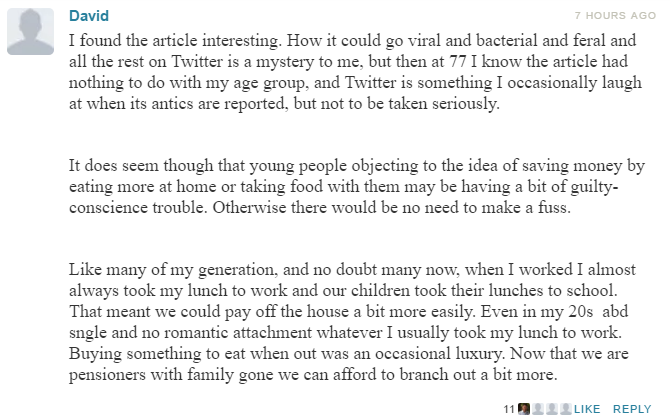 We know internet comment sections are not always bastions of public rhetoric, but they do serve as an approximation of a publication’s audience. With that understanding, it’s plain to see Salt’s readers – many of whom are self-proclaimed Boomers – latched on to that smashed avo snark with gusto, without ever considering it to be satire.

And, to those who believe we may have cherry (tomato)-picked those comments, feel free to read ’em at the source yourself.

The “Twitterati” exploded because the original column was flippant, and it punched down. It’s difficult to see as satire because we hear structurally identical takes on a near-constant basis. Apparently, it’s also difficult for his generation to see as satire, as they’re the ones delivering those very same opinions.

In light of those comments, Salt’s follow-up seems tone deaf at best, and diversionary at worst. We doubt you’ll see him repackage the same “it’s just a prank, bro” memo to his rusted-on audience, but damn: you can’t smash your avo and eat it, too.

The perks of a high profile. ME bank sent me an avocado and feta hamper in advance of their avo home loan launch! @kpmgaustralia @mebank @the.australian #smashedavo