Homo Cred Is On The Rise, Tom Ballard Explains

For his critically-acclaimed stand up venture, My Ego Is Better Than Your Ego, Tom Ballard balances astute observation, boy-next-door charm and, as you might guess from the title, shameless Gen-Y narcissism. His validation-seeking exploration into the self (specifically his self) is hitting the Sydney Comedy Festival this week and tickets are selling quickly so get in fast. When he’s not performing comedy and co-hosting triple j breakfast, he is recognised as one of Australia’s most influential homos – an aggregation of sexual preference that is currently enjoying increasingly credibility and social cache, as Tom explains below…

So as part of working on the triple j breakfast show, sometimes we accidentally receive emails intended for the hard-hitting highbrow newsy news TV show ABC News Breakfast. Instead of commenting on the latest Daft Punk track or our dick jokes or our latest Daft Punk dick jokes, these emails concern themselves with viewers’ firmly-held and generally bamboozling opinions on the news events of the day.

It’s like getting extracts from the comments section of an Andrew Bolt column sent direct to your inbox.

On Monday we were sent a load of old shite concerning the “joke that is same-sex marriage” from a gentleman (somewhat ironically) referring to himself as “Mr. G”. Here’re some highlights:

“Stop the maddness (sic). Stop and think morally Australia, not just to gain a political vote or going with the flow attitude. It is becoming trendy to be gay, it’s not just an hormonal inbalance (sic) anymore. Children at schools are going through fads of being gay because it is apparently a cool thing to do…

“Shame Shame Shame. Love comes in many forms and our actions to certain kind’s (sic) of love has moral and legal boundaries. I love my friends, I love my pets, I love my sport and hobbies, I love the Queen, it does not suggest that I marry them and have children…..”

To be fair, Mr. G is prosecuting an original take here. Never before have I seen the slippery slope argument extended to the notion of people marrying their sport or their hobbies or Queen Elizabeth II.

So it’s all nonsense, except…well, the whole “being gay because apparently it’s a cool thing to do” thing. I doubt there are many students out there becoming the coolest kids on campus by proclaiming to be homosexual, but I am starting to get the feeling that maybe, just maybe, the queer community is racking up some serious recruiting power right now and we are on our way to dominating the world of mainstream cool in the not too distant future.

THAT’S RIGHT BITCHES I SAID IT: THE GAY ARMY BE COMIN’ FOR YOU ALL!!!

If you haven’t read NBA veteran centre Jason Collins’ personal coming out piece in this month’s Sports Illustrated, I’d highly recommend it. It’s heartfelt and painfully honest and inspiring and nicely structured and grammatically accurate and everything. Plus it’s fun to make up your own ring/balls/dribbling jokes in your head as you read along. 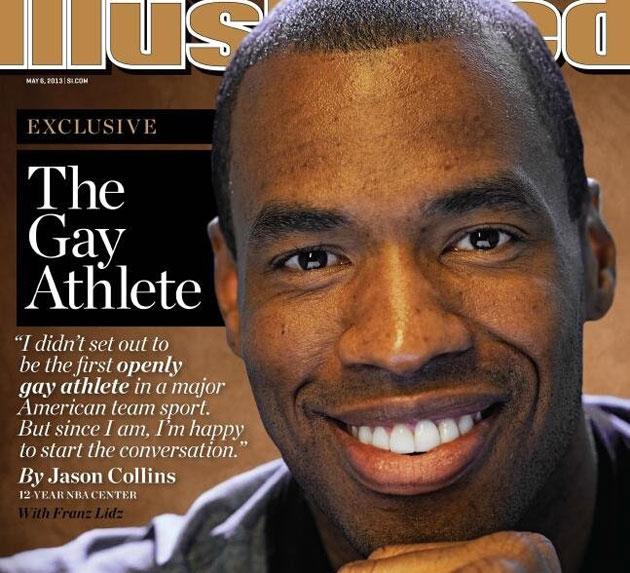 I just hope that one day, once we’ve achieved true equality, Collins will feel as accepted as say, star linebacker Manti Te’o does, and will find the courage to invent an imaginary partner of the same sex without fear of prejudice.

Upon publication of the article, Collins became the first active male professional athlete in a major North American team sport to publicly come out as gay (aka an AMPAMNATSPCOAG). The overwhelming positive reaction to his news is encouraging and it’s a real watershed moment for combating homophobia in sport, although if I’m being completely honest, for maximum effect I do kinda wish Collins played for a slightly more butch-sounding team than “the Washington Wizards”; too close to “fairies” and things disappearing in a “poof!” of smoke if you ask me.

But essentially it’s awesome and I’m stoked for Collins and I hope his example serves as an inspiration and a reminder to other players, the NBA, young LGBTIQ basketball fans out there and society at large that same sex-attracted folks are everywhere and can be just as amazing and as shithouse as any of their breeder colleagues, thank-you-very-much. Last year’s incredible Frank Ocean moment blasted the “no homo” stereotype of African-American R’n’B out of the water, whilst in February of this year we met (and were terrified by) Liz “The Girl-rilla” Carmouche, the UFC’s first openly lesbian fighter.

Thanks to our recent acquisitions, Team Faggot can now pretty much rearrange your face quick smart then croon so sweetly about it even your momma’s going to be thanking us.

Now I’m not saying said role models are “better” or “more worthy” than others. Butch, femme, camp, straight-acting, out, in – whatever! – everyone’s equal, you’re all beautiful and everyone can act how they like and disclose what they want and do whatever and whoever they want, whenever they want with as much or as little lube as they want (I only came out publicly as a comedian to cash in on that sweet pink dollar action and make it pink rain as my Pink Cash Rules Everything Around Me i.e. Oxford Street); But what I am saying is that if we keep this streak of signing left-of-field players up to our side, all those preconceived notions of what it is to be gay are going to crumble down very quickly indeed.

My boyfriend has Blink 182-inspired tattoos and likes car-racing (!!!). We’ve got a member of Odd Future, an NBA player, a UFC fighter, an Icelandic female Prime Minister, a sword-wielding knight in Game of Thrones, bad-ass motherfucker gangsters in The Wire and The Sopranos, Alan Turing (the father of computer science)… Honestly all we need now is a couple of WWE fighters, Betty White, Tony Abbott, the Virgin Mary, Chuck Norris and, like, one member of AC/DC to come out and no one will ever be allowed to be homophobic again because the hypocrisy will be too much bother.

No, “Mr. G”, being gay isn’t now “becoming trendy” amongst “the children”; there’s a world of difference between having tolerance and respect towards sexual diversity versus jumping in headfirst for a laugh.

But every time people like Jason Collins and Frank Ocean become brave enough to put themselves out there and contribute their stories to the cause, the complexity and humanity of the queer community is made just that little bit more difficult to deny. Where someone likes to put their bits says absolutely nothing about who that someone is as a player or as an artist or as a person. There are just too many counter-examples coming to the fore to make assumptions now.

I’m sure when Mr. Ocean is here for Splendour and we fall in love and get married in a tasteful ceremony surrounded by friends and family, he’ll be inclined to agree.

Photos by Jason Merritt and Jonathan Daniel for Getty Images.