Other-worldly Aussie supermodel Gemma Ward withdrew from the industry for a decent chunk of time, staying far clear of a runway from 2009 to 2014. While rumours abounded about her unconfirmed retirement, Ward openly stated she took the break shortly after the death of her new partner Heath Ledger because she wanted to ‘focus on herself’.

Now 28 years old and a mother of a cherub babe named Laia, she signed to IMG Models Australia and returned to the MBFWA runway last year to walk for Ellery.

Many called her return a holy revival of sorts, but a new interview with ELLE Australia – she also features on a unique mix-n-match cover for the mag – confirms that the true resurrection for Ward was the hiatus itself.

“I didn’t feel like I could keep working. There was no way in the beginning, but then as time went on there were other things I felt like I needed to address.

There was a time when I stopped auditioning, I stopped doing anything, and I just wrote, and practised music, because I felt like I needed to have a focus on my voice rather than my image – that was actually really healing.

For me, it helped. And I wanted to focus on things I could develop and get better at because for a period of time I had people telling me, ‘You’ve got to do this when you’re young’, ‘Your looks are going to fade’, ‘You’re not going to get better’.“

The collector’s edition ELLE cover shows Gemma in a range of different beauty looks, from classic pin-up glamour to a natural, muted look that looks ridiculously carefree and pure on Ward’s porcelain skin.

The five images are perforated into three sections, so you can create 35 different looks for the model in total. 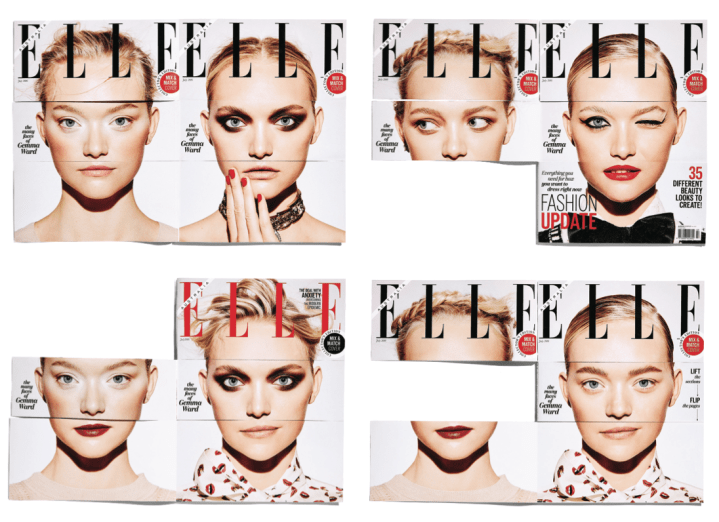 It’s goddamned beautiful no matter which way you flip, and it’s new ground for both the iconic title, according to editor-in-chief Justine Cullen:

“Traditionally, a magazine’s cover has been sacred ground, but I loved the idea of pushing the boundaries to get our audience to engage with the cover beyond the cover lines.”

Our July issue starring Gemma Ward is on sale from today—here’s a handy guide to our five covers and 35 possible cover combinations. ‘Gram your favourite combination using #ELLExGemma for a chance to win a 12-month subscription to #ELLEaus. @gem.gems photographed by @georgesantoni, styled by @rachelwayman, makeup by @victoriabaron for @chanelofficial and hair by Renya Xydis of @valonzhaircutters for @wellapro_anz.

The July issue of ELLE Australia featuring ‘the many faces of Gemma Ward‘ goes on sale today, Monday June 27th.