Prepare Yourself For Winter With Our Comprehensive Flanno Buying Guide

I would not describe myself as a fashionable man. I don’t think anyone else would describe me as a fashionable man either. I don’t know much about clothes beyond which limbs go into which holes and, even then, I will occasionally get this wrong. Like a lot of similarly fashion-illiterate men, I have put all of my fashion eggs into one sartorial basket: the humble flannelette shirt.

The flanno is an affordable, stunningly versatile item of clothing that coquettishly toes the line between respectability (it has a collar) and disaffected casualness (it’s what people in grunge bands wore in the 90s). A flanno worn over a shirt is all you need to survive the brutally mild lows of a Queensland winter. A flanno with the sleeves rolled up won’t treat you much worse than a t-shirt in the summer. They come in an extensive array of tartans, such that a complementary flanno can be found for any outfit you have in mind.

Given the wide availability of the flanno, it can be hard to know where to go to buy them. To help you with this tough decision, allow me to impart upon you the knowledge of Australia’s mainstream flanno retailers that I have gleaned from a decade of only ever buying and wearing the one type of shirt.

For whatever reason, Target absolutely loves to put hoods on their flannelette shirts. They get a sick thrill from doing it. I personally do not like this — I believe the hood needlessly complicates a classic look — but you may feel differently, and I respect your beliefs about this, whatever they are. Target’s flannos seem to run a bit thinner than the others (I consider these to be more of a summer flanno than winterwear) and they’re at the pricier end of the spectrum ($18 – $22), but they do tend to have quite a nice fit. Kmart is an absolute titan in the flanno game in my books. The flannos are cheap ($15 for the regular ones, $20 for quilted, and they will go for half price if you buy them at the right time of the year) and delightfully soft and warm. I find the Kmart flannos are a bit of a boxy fit, but with the amount of beer that I drink, I appreciate having some wiggle room in the gut area.

Cons: Not a great colour and pattern selection. 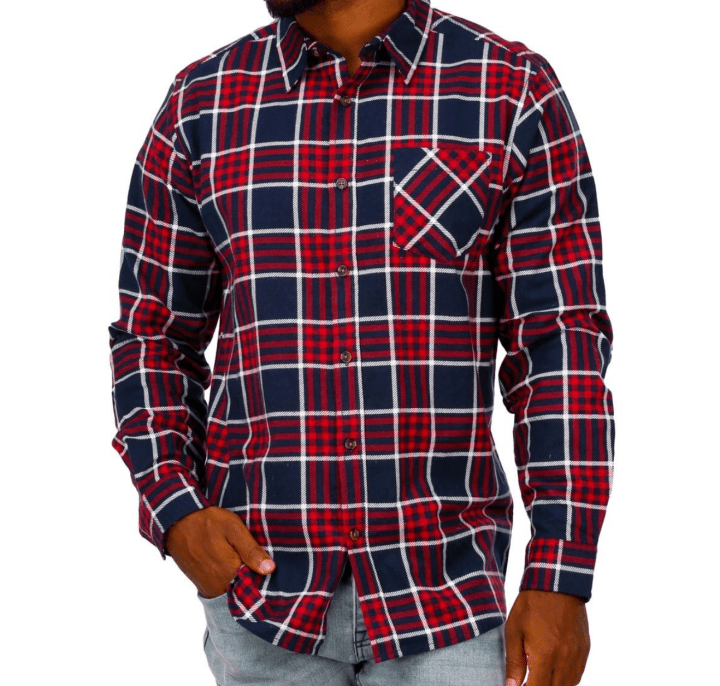 You simply cannot deny that the Big W flanno is cheap — they’re currently going for $8 a pop — but something about them always looks a bit off to me. The fit is strange, the collar feels a little large, and the colours are a little obnoxious for my taste. They are, however, quite warm and perfectly serviceable for the price.

While Lowes is usually quite reliable for this sort of thing, I find their offerings in the flanno space to be somewhat underwhelming. The price point is nothing spectacular ($18) and the shirts themselves are boxy and stiff, taking a fair bit of breaking in before they soften and hang off your body comfortably. I will, however, go into bat for their quilted flannelette shirts, which fit a bit more like a jacket and are absurdly cosy to wear.

Cons: Just not that great. Pockets too big also?

In a similar fashion to Lowes, the Best&Less flanno is a very strange fit, but they are substantially cheaper (currently $10) and do all the functional things that are required of a flanno (my one mostly gets worn around the house). The fit is quite wide and the sleeves are generous to the point of being puffy, which might well fit your body type if you are extraordinarily muscular.

The weird place that sells knives and military backpacks is a surprising entry into this list, but the single flanno I bought from an Aussie Disposals in 2013 for $15 has proved itself to be the best clothing purchase I’ve ever made. The fit is great, the texture is delightful, the pattern is as good as you’re going to get with a flanno, and it is the perfect thickness for a Brisbane winter. Much like the Lowes flannelette shirt, it was a bit stiff for a while before it was properly broken in, but it was definitely worth putting in the hours (of wearing it).

Always a fantastic bet. Op shops are full of flannos and they are dirt cheap. Buying a used one is better for the environment, better for the charity that runs the op shop, and better for you, as it means that someone has already worn the cotton down so it’s nice and soft.

You can also try your luck with hiking stores and surf/skate clothing shops but both of these options will be on the pricier side, which kinda defeats the purpose of the whole exercise. Anywhere that dads love to shop (*cough* Rivers *cough*) will almost certainly have flannos as well, but the more daddish the store, the less flattering the fit will tend to be.