Day one of Fashion Week Australia opened with a celebration (the tenth anniversary show for camilla and marc) and closed with a triumph (Romance Was Born‘s awe-inspiring psychedelic spectacular). Throughout the week we’ll be hitting the collection shows, going backstage and creeping on the beautifully dressed special guests, snapping pics on the fantastic Sony Xperia Z, from which we’ll be posting regular updates on Pedestrian’s Instagram (@pedestriantv) and Twitter. Here’s a recap of MBFWA day one which also featured Christopher Esber, Bec & Bridge, Alex Perry, Julia Nobis, Phoebe Tonkin, so many bloggers, coffee, discussions about coffee, and, ultimately, crushed feet. Ready? Begin.

From 9am until evening the sun was shining over MBFWA’s new site, Carriageworks, an expansive industrial space in Sydney suburb Eveleigh: 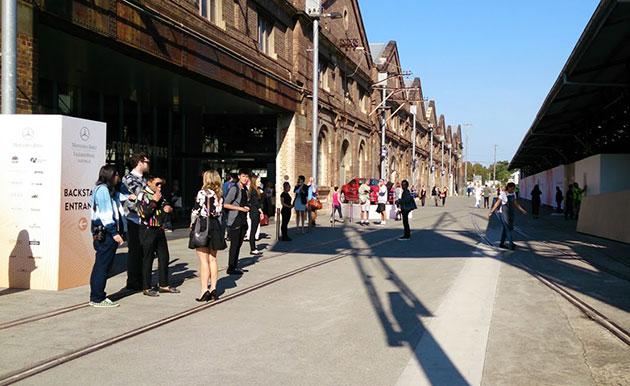 Soon after arriving I bumped into super talented styling team, Ingrid Kesa and Hayley Morgan AKA You And Me 4 Eva, to talk about the weirdness of the street style phenomenon while we watched international bloggers like Susannah Lau and Vogue Australia‘s special guest, Phoebe Tonkin, get hounded by enthusiastic camera-wielding snappers. Then I made Ingrid and Hayley do a street style photo for me. 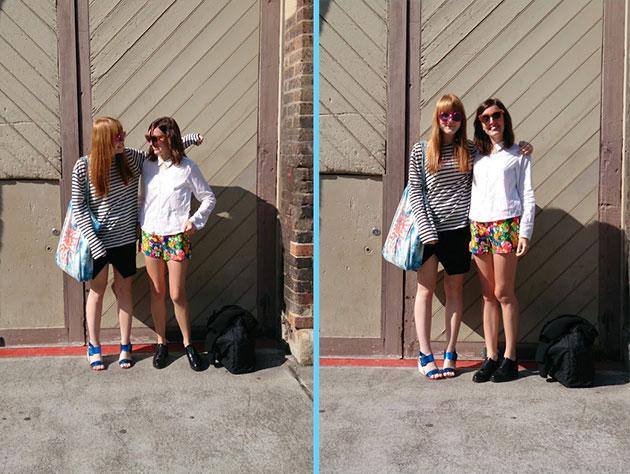 Another early arrival was the always camera-ready, one-time Pedestrian collaborator Sara Donaldson of blog Harper and Harley looking chic in stripes and a black cape. Note: Many capes of different sizes and structural architecture spotted on day one. The cape is definitely a major trend piece moving into Winter. 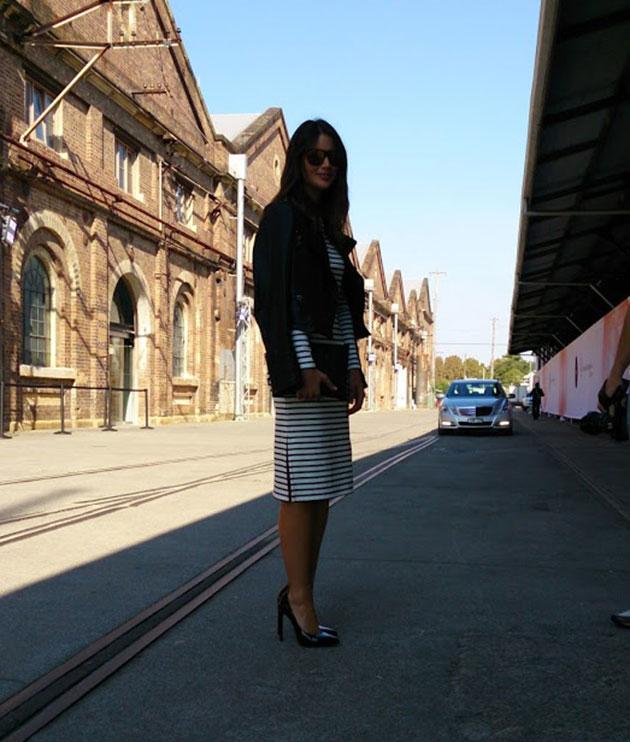 Camilla and Marc opened MBFWA with their tenth anniversary collection named “Concentric”. The collection was largely an extension of the sibling duo’s modus operandi of previous collections; specifically, luxe fabrication across a range of textures, sport-inspired elements and high-quality execution of clothes that exude feminine strength. Highlights of the show included a selection of outerwear in decadent gold brocade with black accents, and a beautiful section of boudoir-ready pieces in super-fine spidery black lace. Another highlight was seeing amazing Australian model Julia Nobis back in town to open the show. I literally die. The front row seats were filled with the international blogging contingency (Tommy Ton, Susie Bubble, Phil Oh of The Streetpeeper, and Bryan Boy, plus Phoebe Tonkin (dressed in leopard print camilla and marc) next to Lara Bingle and Gracie Otto.

Backstage before camilla and marc, make up guru Napoleon wields his magic tools: 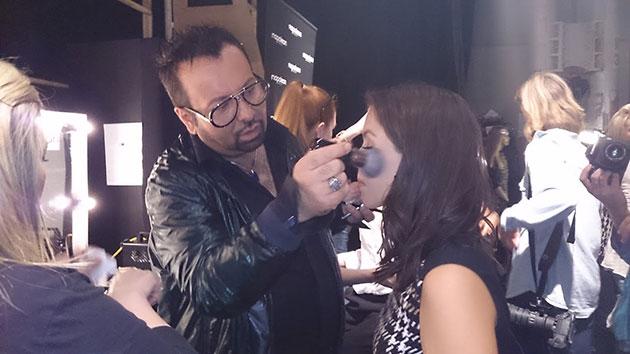 Model Nicole Pollard gets the finishing touches before the show: 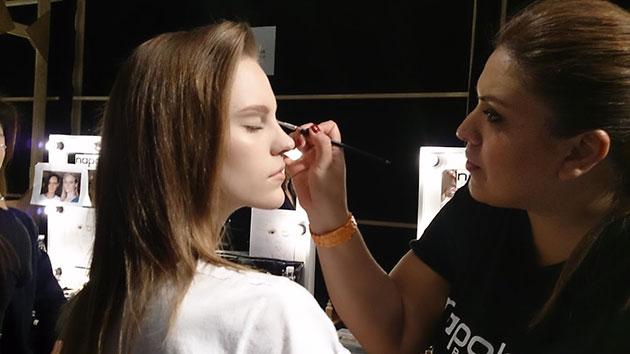 The next show on the schedule was from Bec & Bridge who delivered a collection combining one section heavily informed by ’90s grunge – flimsy silk slips a la Courtney Love and a recurring pearly fish scale print splattered across fluid trousers and drapey satin tops. The other section featured sport elements like racer-back tops, oversized sleeveless leather vests and a series of bandage-like bodycon dresses with mesh panels. The show had a couple of issues – a badly mixed soundtrack, some poorly finished pieces where seams bulged unintentionally and hems appeared roughly cut, and there was too much white satin (i.e. ANY), but the collection definitely had its fans. The Nineties elements were cool and the space had an incredible light installation over the runway. Phoebe Tonkin was back in front row wearing Bec & Bridge, sitting front row between Elle Australia editor Justine Cullen, and Vogue‘s Christine Centenera. 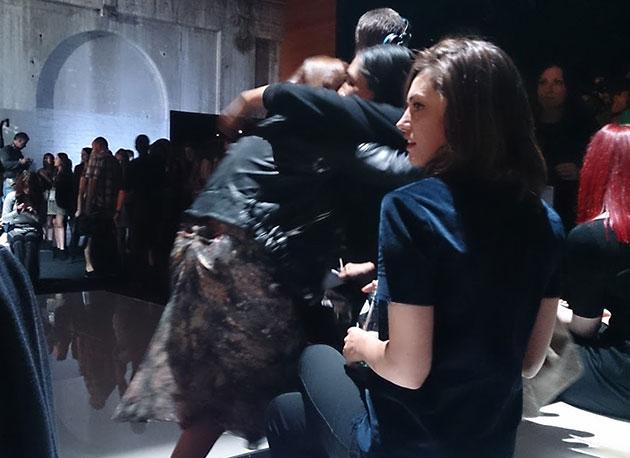 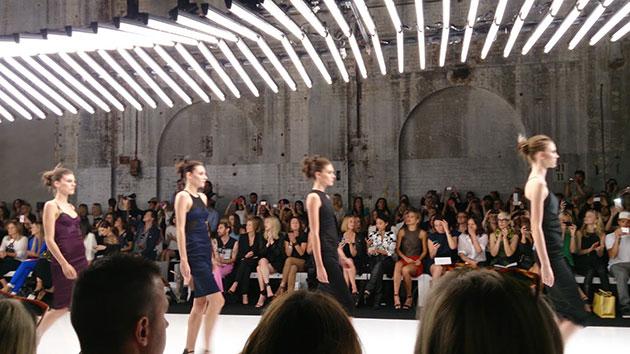 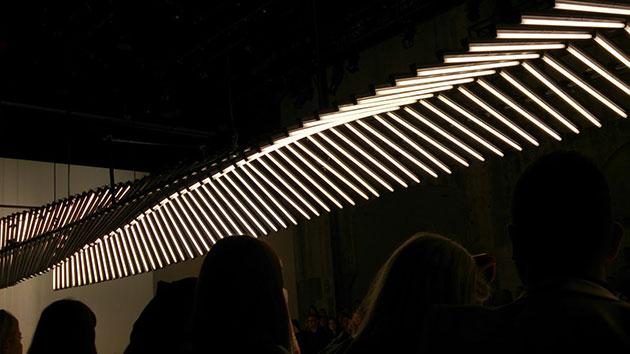 Christopher Esber‘s show has been one of the most anticipated of Fashion Week, set off site in a massive industrial warehouse. For his Spring/Summer 2013 collection Esber went in a more muted direction, choosing neutral hues in interesting textured cotton weaves in neutrals and light blue, linen and hand woven silk. A liquid silk draping sheath dress in a soft apricot colour stood out, so did the amazing structural design of Esber’s outerwear – an origami-like black cape and cropped black jacket in firm textured silk looked amazing. Esber’s gift for tailoring and immaculate finishing was all there. It was maybe a little too muted to hold up to the audience’s expectations. Ladylike, technically fantastic, beautifully finished, but perhaps a little too ladylike.

Ruby Jean Wilson on the runway in Christopher Esber: 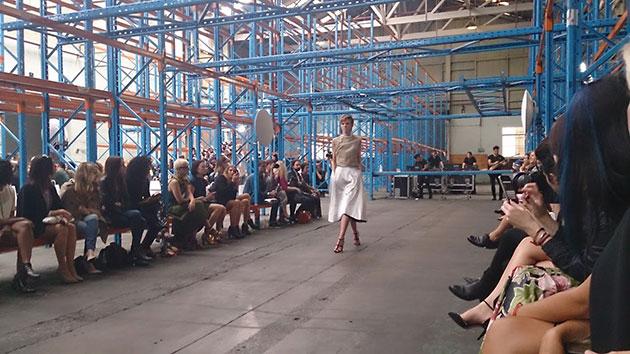 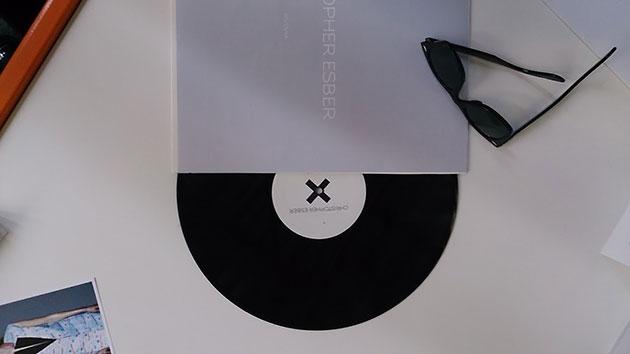 Phil Oh of Streetpeeper, Tanja G of My Empirical Life and photographer/model Candice Lake outside the show: 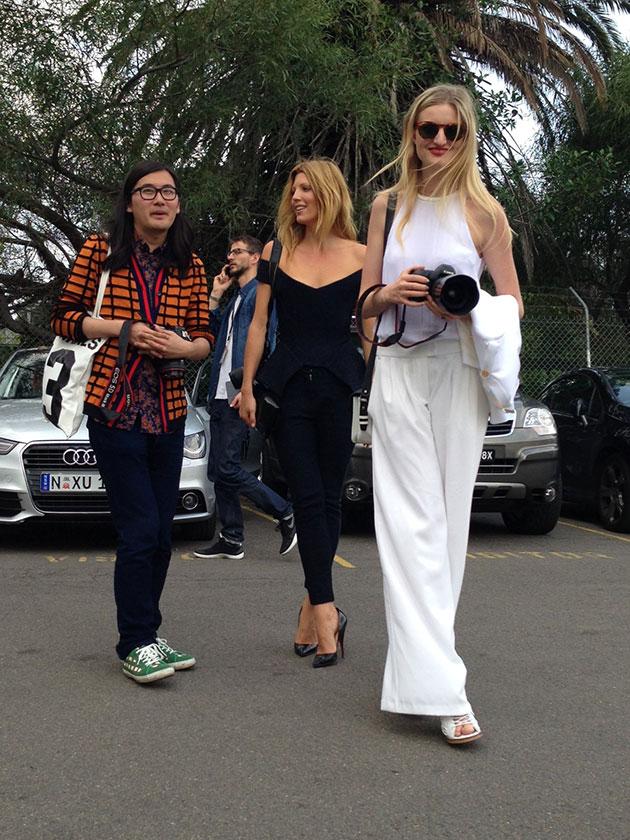 Alex Perry took a surprising departure from his super-formal red carpet gowns and went for a younger, sportier direction with a lineup of cute and perfectly assembled mini dresses (VERY mini, some of them), with exposed zippers running the kength of models’ spines, black panelling splitting sections of peach, yellow and white, corseted bustiers, and enough sleek lace formal wear to keep his regular clientele satisfied. 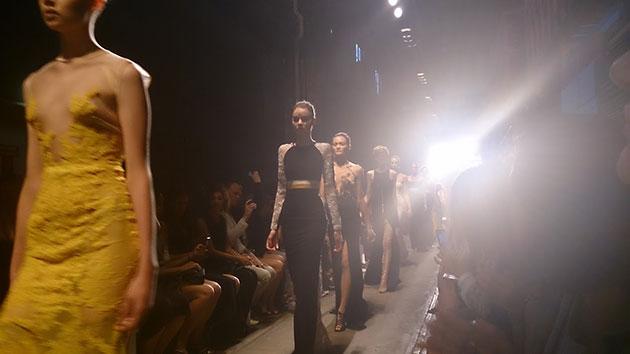 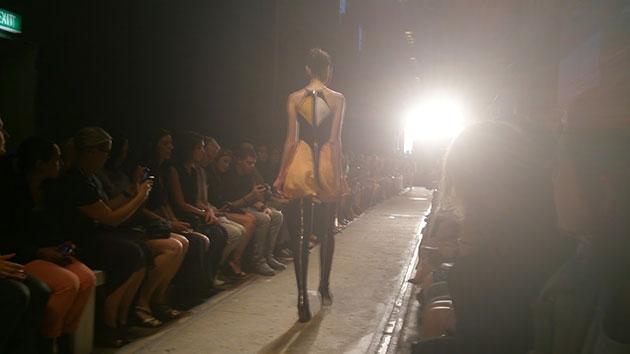 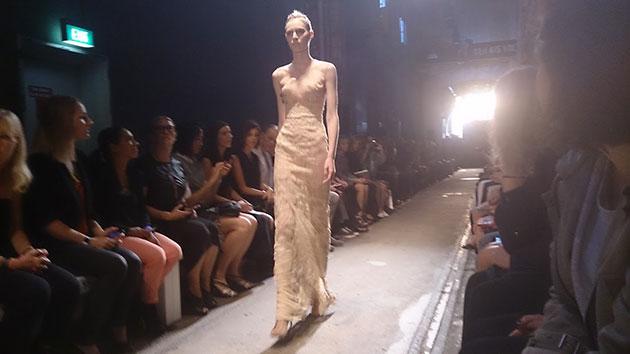 Romance Was Born closed day one with a spectacular show. You can read my review here and watch the opening below…

Romance Was Born ‘Mushroom Magic’ from PEDESTRIAN.TV on Vimeo.