Take an exclusive look behind-the-scenes of Australia Fashion Week with Olivia Thornton, the Gold Coast bred, Sydney-based stunner with gorgeous freckles and startling green eyes. Olivia has been signed with Vivien’s Model Management ever since being scouted for a shopping centre modeling comp. Cut to the year 2011 and Olivia has landed campaigns with ELLERY and Aje, and last week walked in no less than 14 shows. Read Olivia’s backstage diary of Fashion Week 2011 and get a sense of what it’s like to take a walk in her (sometimes too small) shoes at the country’s premiere fashion event. Being a model actually sounds as fun as it looks. Damn…

Hello there Pedestrian TV, my name is Olivia Thornton and I’m here to take you on a magical carpet ride through my journey of RAFW 2011.

The week kicked off with one of the most energetic shows – Alex Perry. It’s hard to think about how tired you are at 6am when there’s makeup-tent-shaking bass radiating from the cargo hall, prefiguring what was to be one of the most dance-y backstage experiences I’ve had in a long time. We were lucky enough to have the man himself, Mr Napoleon Perdis, commandeering a beautiful and strong makeup look. 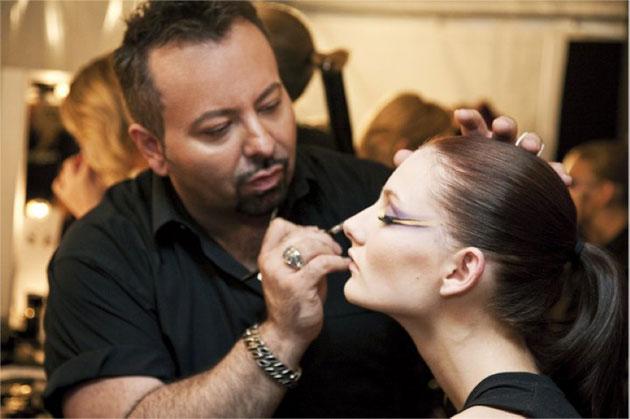 After the show I was lucky enough to have some downtime until my next show, Friend Of Mine, which was all midriff, ridiculously incredibly amazing shoes, doo-rags, beautiful bottle blondes and The Smiths. Heavenly combination. Here I am kickin’ backstage before the show! 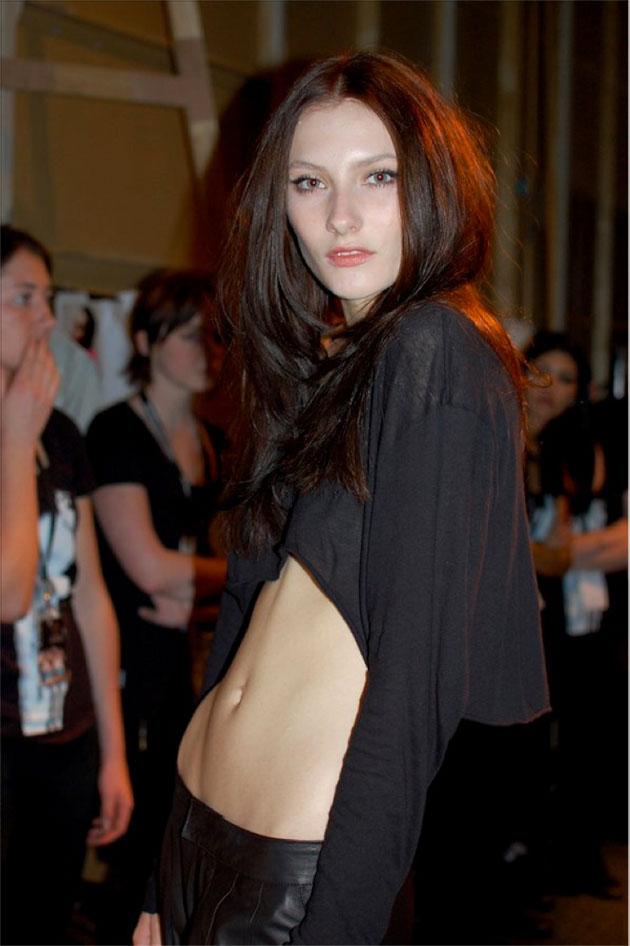 The next day begins with Therese Rawsthorne, held at The Carriage Works in Eveleigh- a cool, almost eerie warehouse-y kind of venue. I think the most talked about topic backstage were the shoes! Girls teetered through a 7am rehearsal but luckily, come show time, no one so much as stumbled. This Twin-Peaks inspired show was an undeniable success.

I then dashed off to my next show, Manning Cartell, which was to be held in the foyer of The Cove near The Rocks. Girls descended the stairs in beautiful, African inspired outfits, and floated about on a gold runway like Goddesses. There were pretty full-on shoes involved in this show as well! 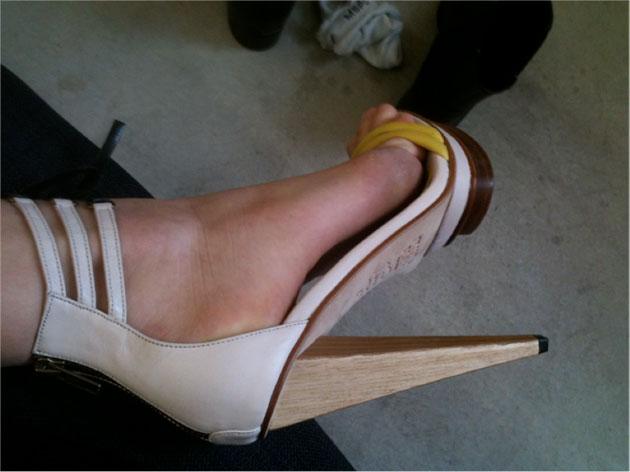 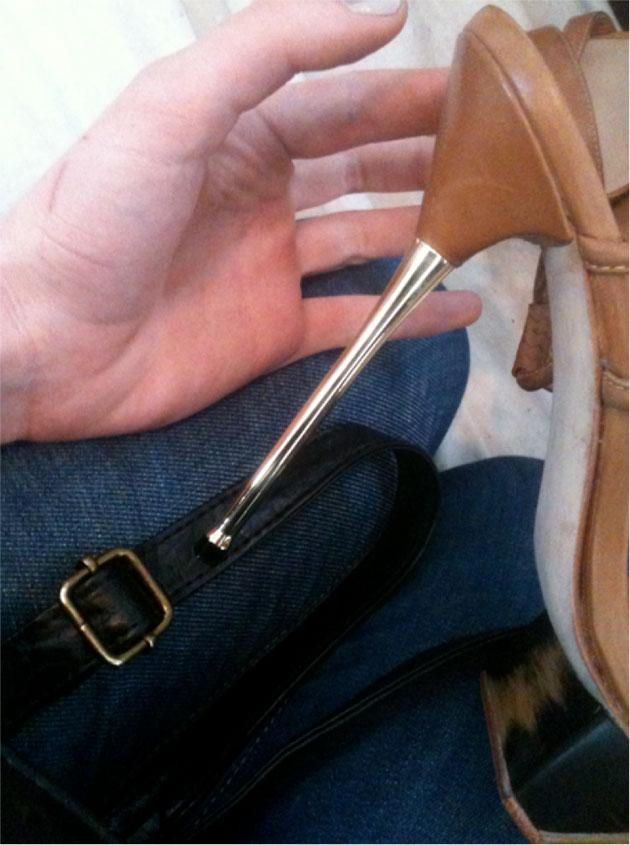 Next in store for me was Nookie, where bronzed beach babes took to the runway barefoot and adorned with an airbrushed tribal print, matching the set of the show.

Last show of the night was Marnie Skillings – and easily one of my favourite shows of the week. Why you ask? Because we had hats (and GREAT hats at that), socks with shoes, eclectic prints and great music. Why wouldn’t you love it? In addition, I may or may not have opened… ha.

Me before the show: note the hat! 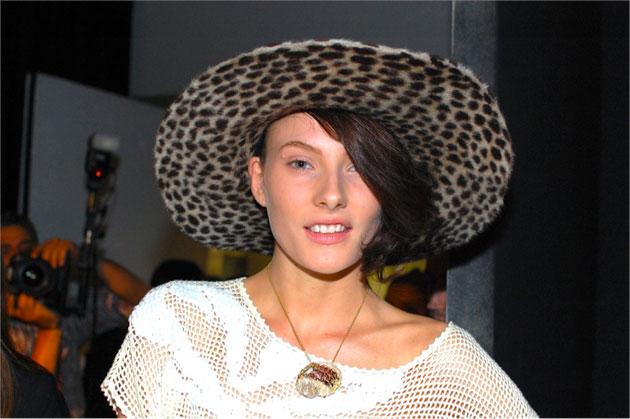 After the energetic, casual-chic Talulah on Wednesday morning, I had a mad rush to get to Magdalena Velevska, which was due to start shortly afterwards. Let’s put things into perspective here- everyone else’s hair and makeup? Two hours. Mine? Fifteen minutes. I have a lot to owe to hair and makeup for getting me out there on time! Velevska was another one of my favourite’s for the week- the girls mapped a square around a jumble of UV light tubes in the centre of the runway which turned the beautifully tailored clothes fluoro during a dramatic finale. Check out the hair! 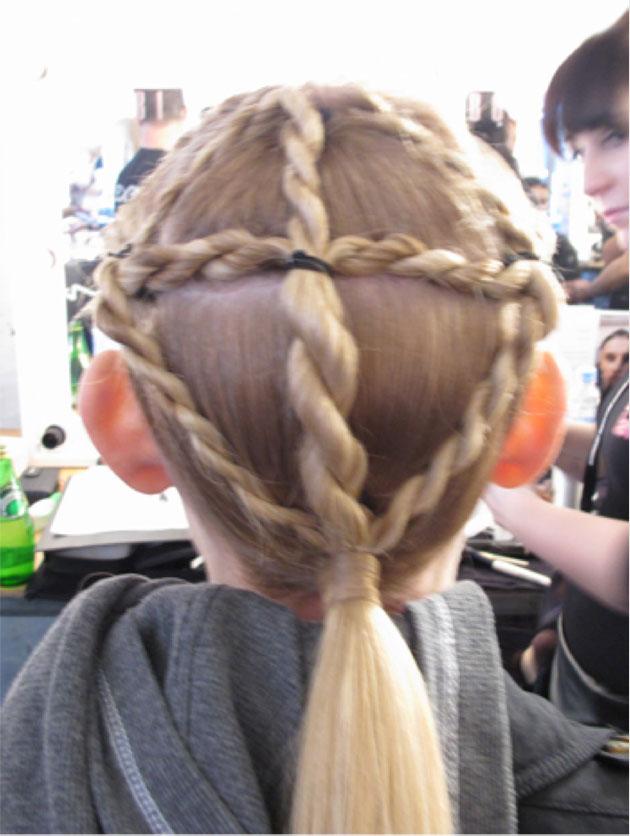 The evening brought Camilla and Marc – held in the State Theatre. Does anyone else think that is the most incredible building ever? I was absolutely blown away by the adorned ceilings, to the point of literally standing and staring until strange looks from my comrades tore me away…almost. Girls walked through a glowing archway onto the marbled floors of the theatre, where an awed audience was treated a collection featuring splashes of hot pink, royal blue and emerald green and shirts tailored from neoprene. Despite my tiiiiiiiny tiny shoes, it was an enjoyable show with great energy!

Here I am backstage before the shoes: 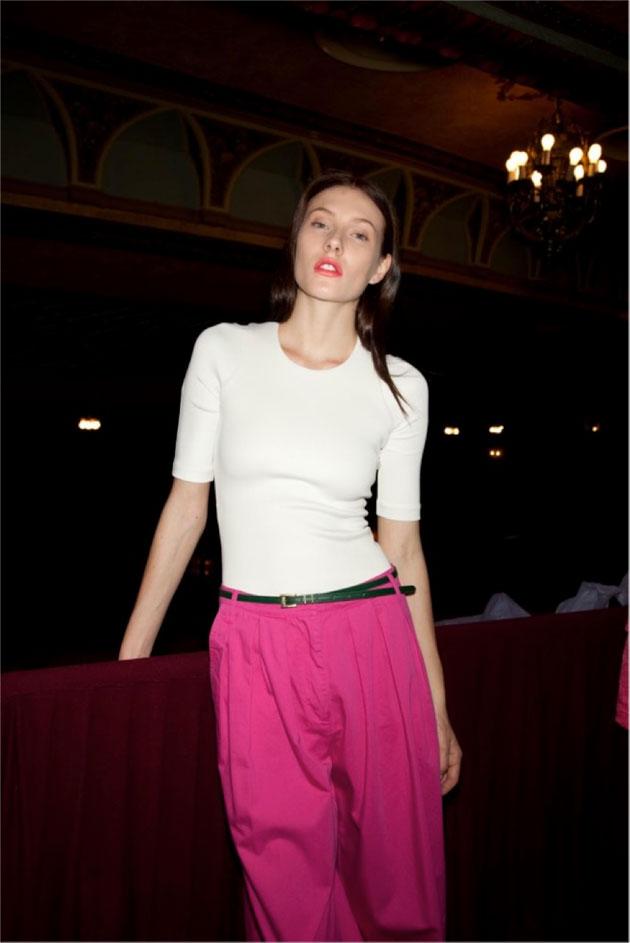 With the next morning came Dion Lee. I…I have no words for this show. It was such a spectacle, watching impossibly beautiful girls wander onto reflective catwalks, appearing from the shadows into the glorious 9am-on-Sydney-Harbour light, carrying themselves with an utmost air of serenity, dressed to tailored perfection, adorned with edgy, almost obnoxious silver jewellery. Girls had their hair sprayed black and slicked to the side to create an almost harsh, boyish beauty. It was easily one of the most exciting and rewarding shows to be apart of…despite the 5am call time.

Here is a backstage shot featuring Rachel Rutt, Jemma Baines and myself: 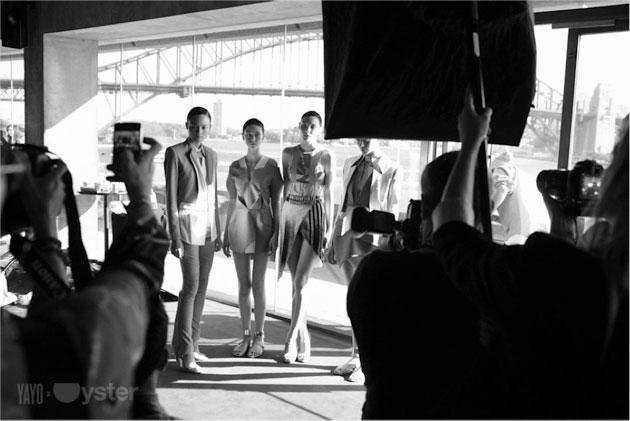 Ellery‘s show followed, held at White Rabbit Gallery in Chippendale. Girls took to the runway in pairs to keep in line with the ‘marriage’ theme, accompanied by eerie poetry to add a strong theatrical element to the show. Kym Ellery never fails to impress with this collection entitled ‘The Second Marriage’ featuring strong tailoring, cinched-in waists muted gold and nude tones and bold prints.

Myself and my ‘partner’ Phillipa Gleeson 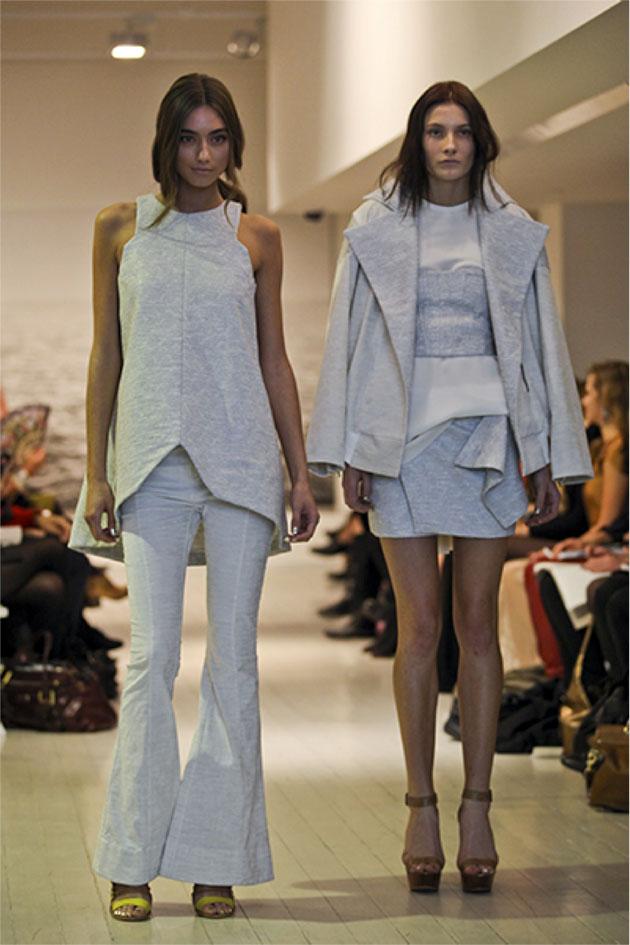 Image couresty of Breakfast With Audrey.

Stolen Girlfriends Club, the last show of the day (for me, at least) arrived, and there was a definite buzz surrounding the make-up choices. Blondes were given bright pink lips, painted on in an almost clown-like manner, and brunettes were treated to…yep…Purple glitter. Yeah!

Dodgy phone image of my makeup: 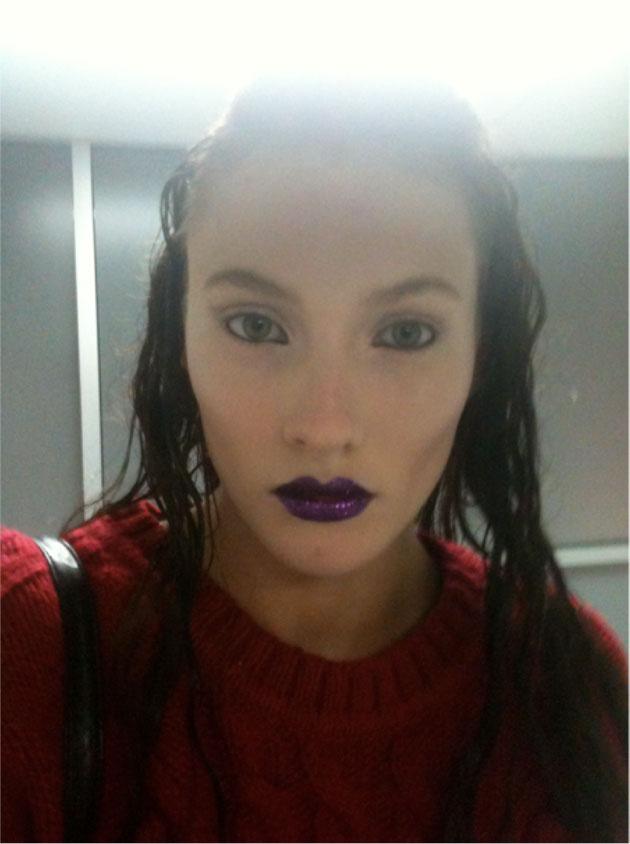 Girls teetered on glittered platform heels or stomped about in adorned brothel-creepers, which added an extra element of ‘cool’ to an already edgy show.

The last day of RAFW arrived with a 10:00am show – Lisa Maree. Despite being on the opposite end of the spectrum from ‘Victoria’s Secret-esque bombshell model’ I was given a HUGE pair of snakeskin print wings to accompany my gorgeous crochet cut-out one piece. Needless to say I worked my wings to the best of my ability. The show had a very animalistic element, where girls were given crows wings, crows perched on heads and snakes crawling up legs (fake-don’t worry). 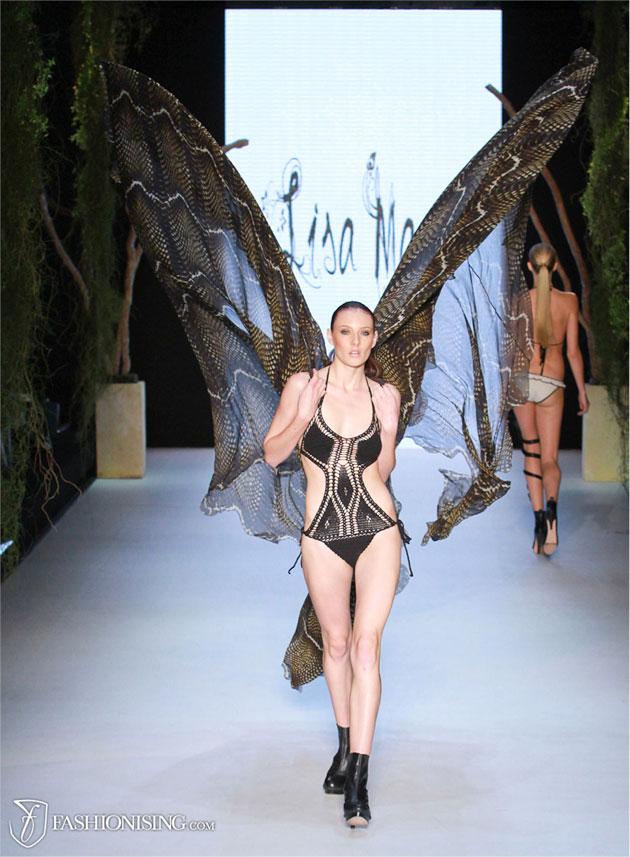 The Raffles Design College show followed, and we were given a great opportunity to showcase the wares of some talented new designers.

Finally, 1:30pm came around- the call time of my last show for RAFW 2011-The New Generation show #2. Yee-haw! It was an honour to display the collections of some of Australia’s ‘next big things’ in Fashion design. I was particularly drawn to Jamie-Lee’s bold prints and wild platform shoes dripped with resin

Enjoy this display of not only Jamie’s colourful talent, but my, er, end-of-the-week-delirium. Or something like that. 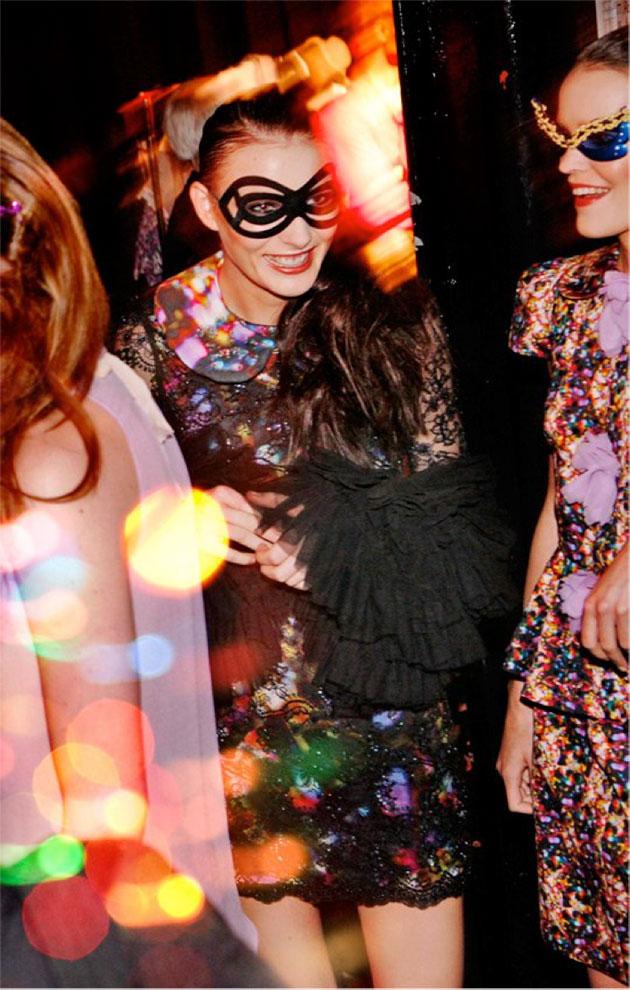 And so it comes to an end. My first, REAL RAFW experience. Fifteen shows later, and my eyelids are crusty and ridiculous weekend-after-fashion-week fatigue is imminent. But, this wouldn’t be an Olivia blog if there wasn’t a positive (euphemism for cliché, if you will) aspect: Yes I met inspiring and insightful people, yes I learned a lot about which way to tilt my head so that my scalp hurts less whilst being pulled, and yes, I danced. Like a wanker. A lot. But, if I had the chance, I’d most certainly do it all again and again.

Let me sleep for a couple of weeks though…