Back in the days when the internet was slow (lol, still is) and your phone wasn’t as smart, magazines reigned supreme. And as teenagers during this time, we received all our knowledge from those glossy things like they were actual bibles.

This meant getting all – and I mean all – our fashion inspiration from those pages. Guided only by a small fashion team who seemed really obsessed with kitten heels, we started a journey into style hell – all the trends, all the time. And Christ, there were some bad trends.

Both Courtney, my colleague, and I recently stumbled upon our stash of Dolly magazines during a bit of summer cleaning, and decided to share our favourite fashion crises with you.

MEL: Ok, so for some reason I was a stage 10 hoarder as a teenager, and I recently discovered – inspired by you, and your own discovery of course – that I seem to have every single issue of Dolly and Girlfriend from the years 2001 – 2004.

COURTNEY: Yeah I have such a terrible habit of Not Throwing Anything Away Ever, so Mum dumped me with about 30 Dolly magazines from my preteens. And they’re like, a perfect snapshot of life when the internet was a thing but it wasn’t as much of a constant as it is now. It was still the time when you’d get an hour on the family computer after dinner, and you’d get this huge feeling of absolute dread if you accidentally opened the ‘Internet’ access button on your Nokia 3200
because that shit DRAINED your credit.

MEL: Absolutely, and also as I was flipping through I just realised how much these mags dictated all my choices. Like, yes I will believe that because this quiz written by, probably, an intern says that I am most like AJ Michalka that I should buy blue lip gloss today.

COURTNEY: Oh my god the STYLE, right? Written and taken like it was absolute gospel but looking back, looks like hot dogshit hahaha.

MEL: Speaking of dictating my choices, all my fashion ones were RULED by Dolly. And flipping through was just a real… well. Look at this. 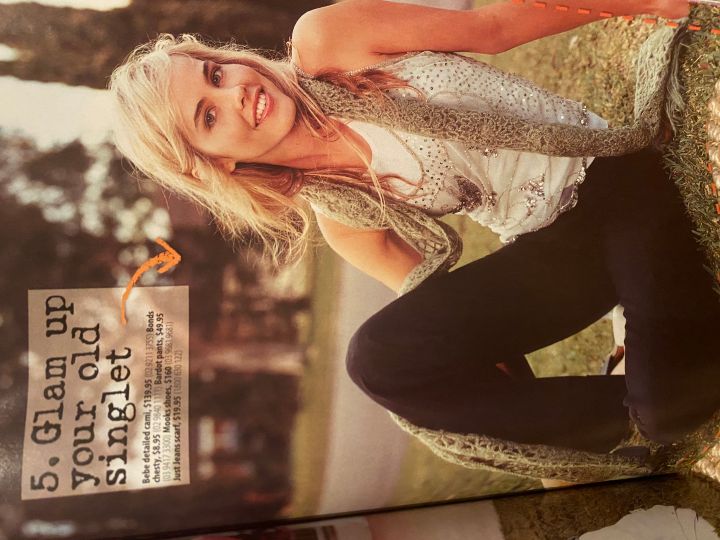 COURTNEY: So much “glamming up” of tired clothes, you simply have to stan Dolly for being an early-adopter of upcycling.

MEL: Also, I had about ten of those impossibly long, useless scarves.

COURTNEY: What were they even good for!? definitely not keeping you warm.

MEL: And you wore them with SINGLETS????

COURTNEY: Meanwhile I was over here trying to recreate my newly-found angsty teen aesthetic with…this. Please, tell me what the fuck is going on here. 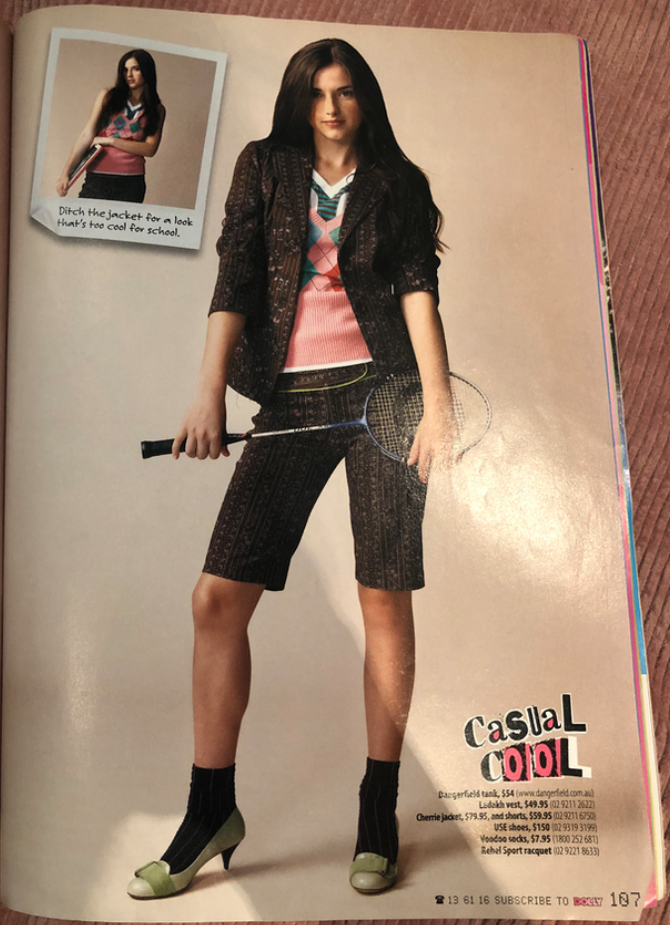 MEL: Oh my GOD I forgot about a) knee-length suit shorts and b) wearing kitten heels with them, always.

MEL: Also why has she got a badminton racquet?

COURTNEY: I think she’s also wearing a shirt with a printed-on tie.

MEL: I also found some knee-length formal shorts fiasco, by the way: 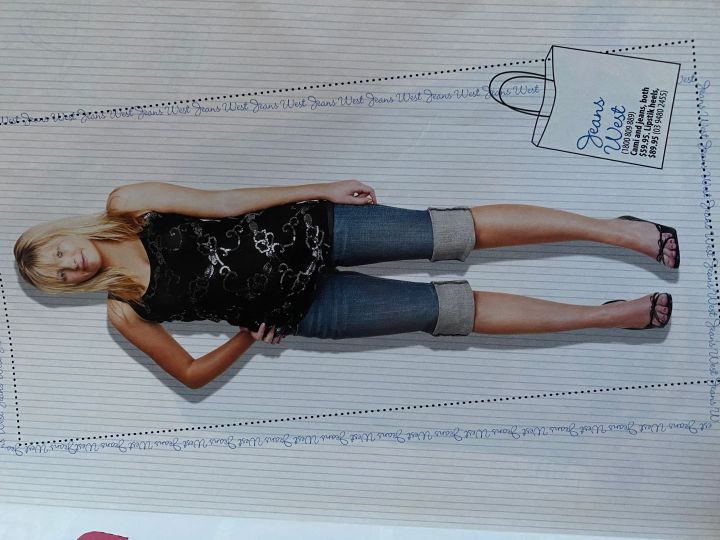 MEL: Mine is more casual-movies-with-the-gals.

COURTNEY: Are those rolled-up capris?

MEL: I think so, teamed with one of those insanely long tank tops that could double as a dress.

COURTNEY: Ah yes, those long line Supre singlets that absolutely all of the girls back home wore AS dresses, with the material cummerbund/belt.

MEL: Speaking of, there was an entire page dedicated to those in one of mine. 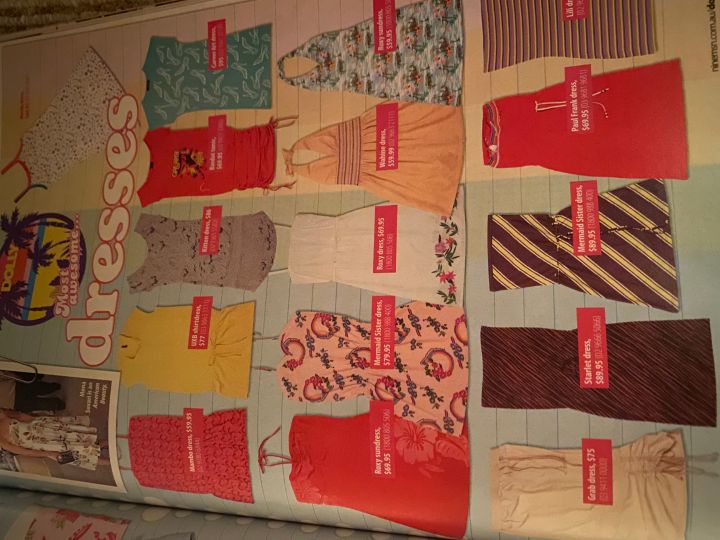 COURTNEY: Wow all i can hear when i look at this is Eric Prydz’s Call On Me.

MEL: I’m going more of the Pete Murray / So Beautiful and I’m the girl in it, and I’m wearing that stripy surf shop dress down the bottom there. 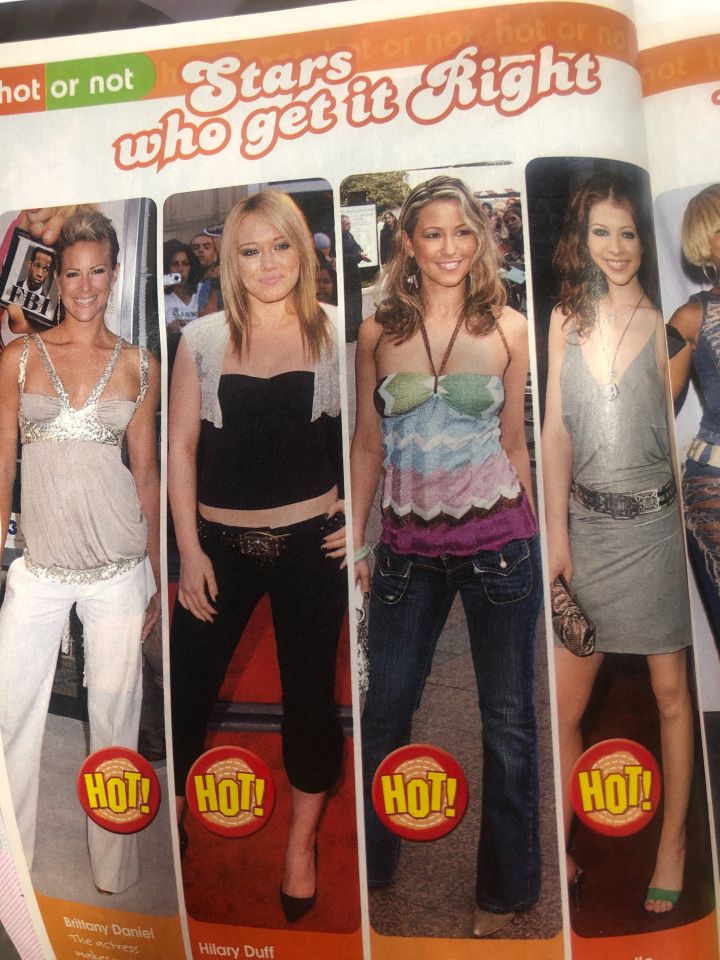 COURTNEY: That sequinned trim was SUCH a huge vibe, i remember having a dusty pink dress with that on it, and i wore it to death.

MEL: Also that unflattering separated-boob top with the middle halter!! I had about 13 of those, and that is 13 too many.

COURTNEY: Just make it a boob tube and be done with it, that halter shit looks terrible on literally everyone. Also Hilary Duff out here in the triple threat: bolero, mid-riff, pedal pushers. God, they’re all lowrider jeans as well.

MEL: Formal shorts count: 3. It’s a technicality but I give it a pass. Hey you know how you were counting kitten heels? Let’s go off the charts, baby. 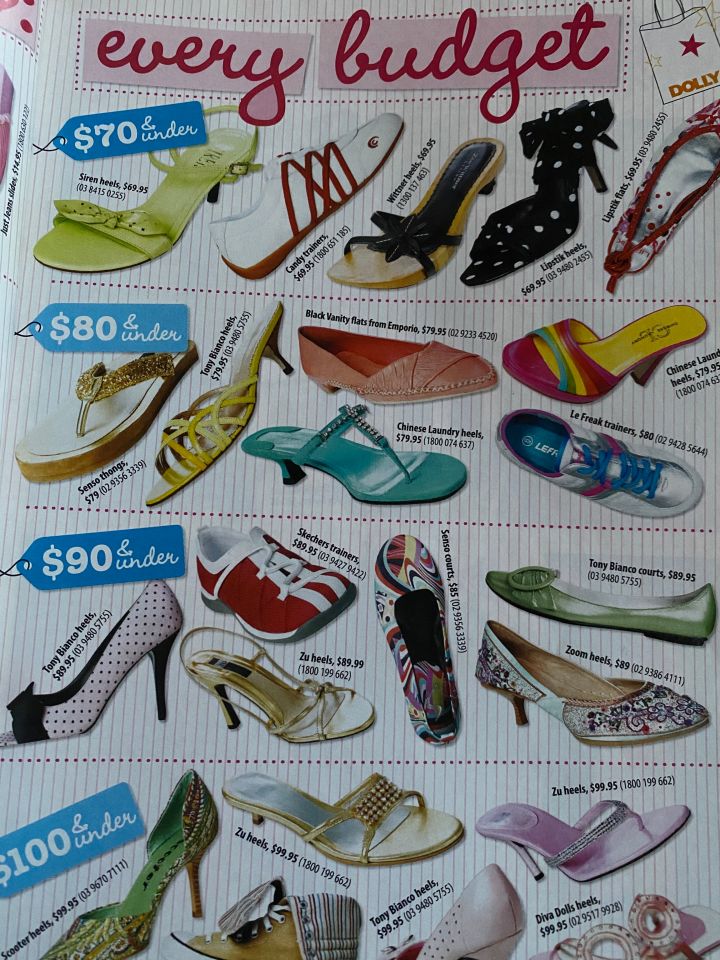 MEL: I would just like to initially discuss these, Skechers I am calling the POLICE: 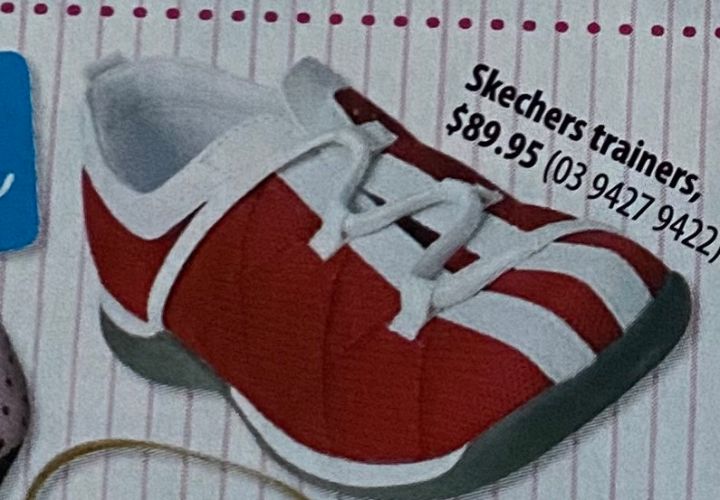 COURTNEY: Can you pls also report those Candy trainers too: 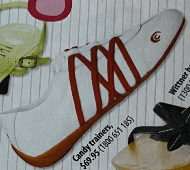 COURTNEY: I remember girls coming back to school with those on and everyone being SO jealous.

MEL: My sneakers do not – I repeat, do not – need racing stripes. Same though, and I can’t talk I had slip on closed TOE Converse.

COURTNEY: Who even are you? Can we please quickly discuss how St Ives basically had a full page spread in like, every mag? Because… 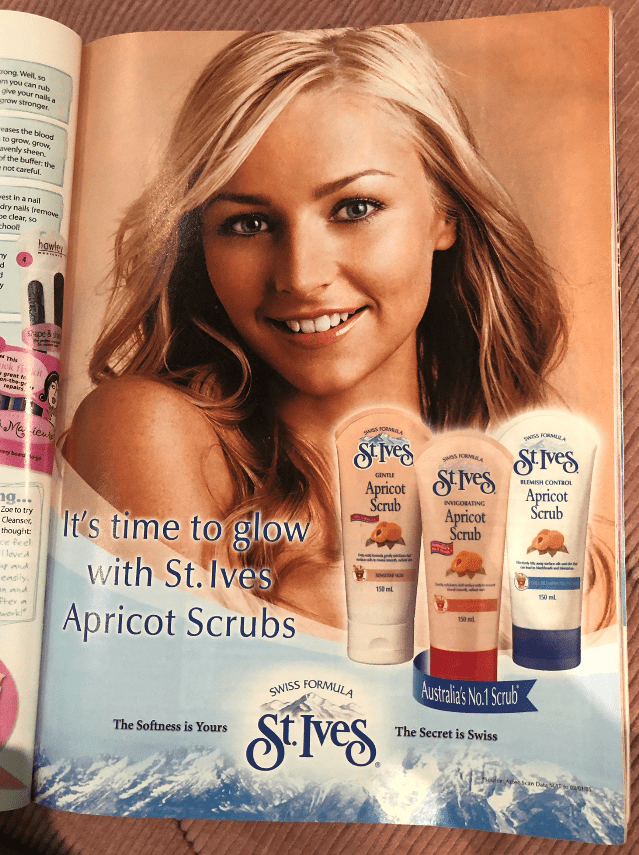 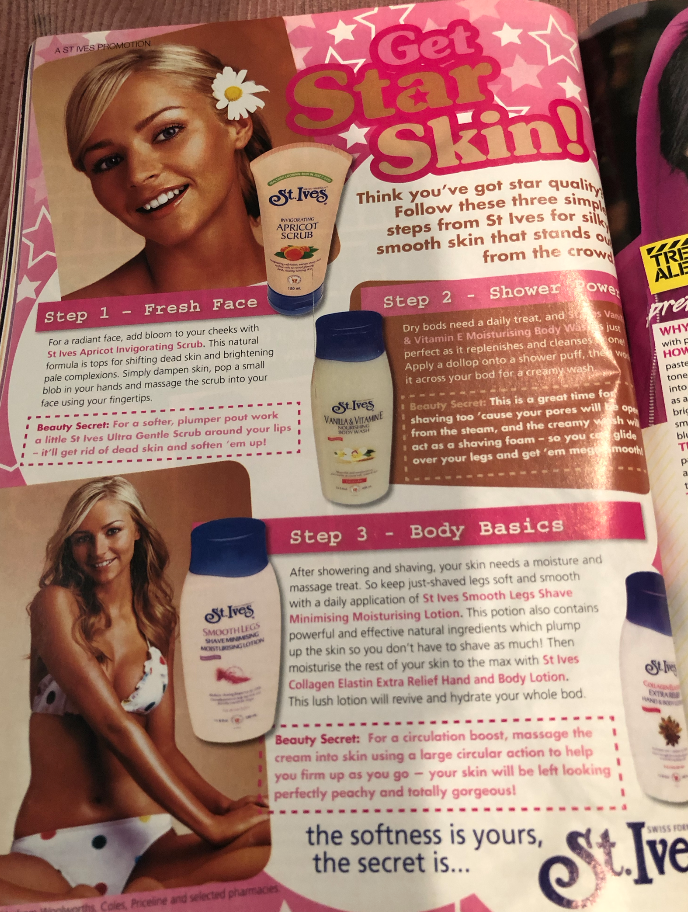 MEL: OH MY GOD, YES. They were scrubbing the entire top skin layer off every woman’s face ages 12-20 for the entire 2000s, I think.

COURTNEY: I can smell those ads. I can also smell these pages. 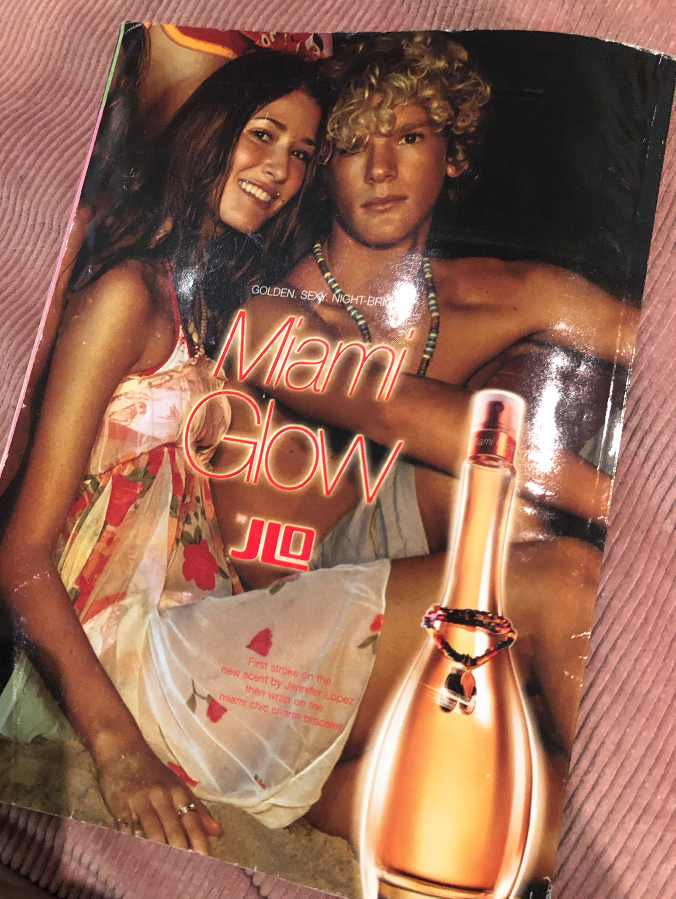 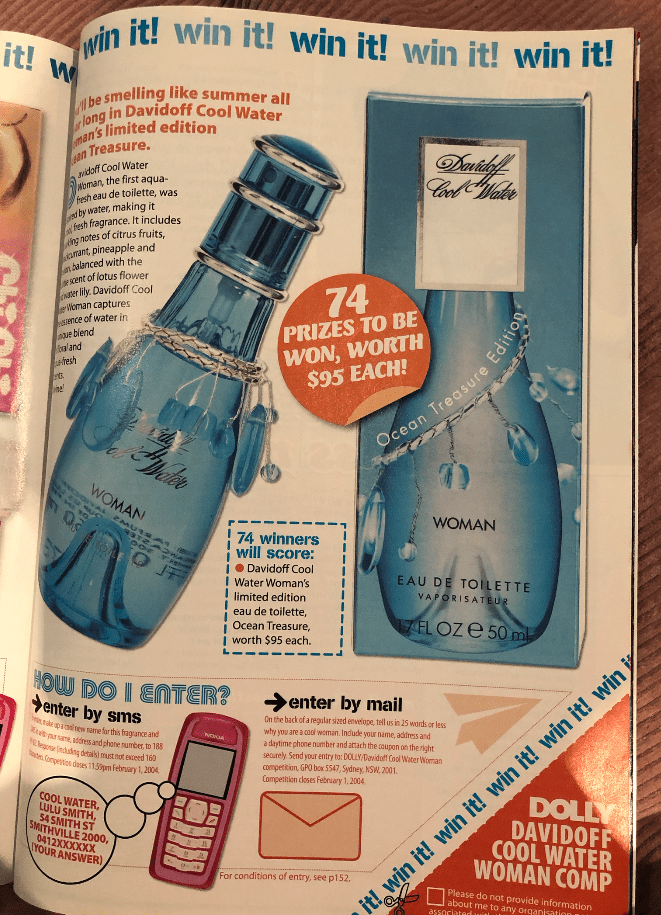 MEL: SAME, for a strong year I doused myself in Davidoff Cool Water. I can never, ever wear it again.

COURTNEY: Oh here’s another pearler of a trend from the 00s that somehow stuck around in one form or another
those tops you could wear like, a billion different ways. 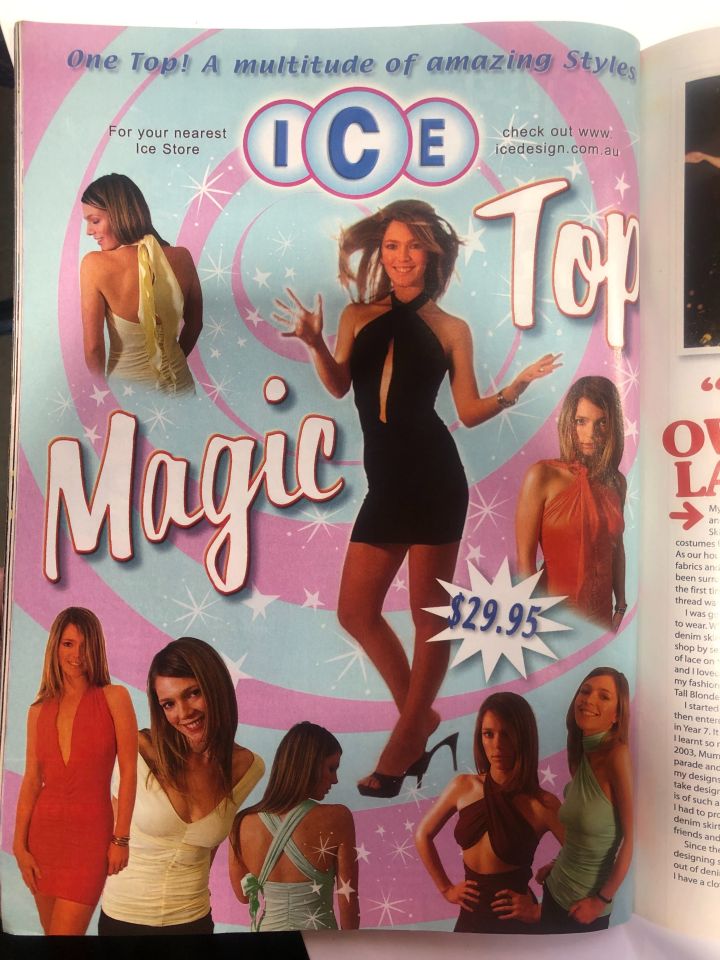 MEL: Okay on that dress-12-ways bit, remember these style pages where they took an item and inexplicably turned it into things it should never, ever have been? 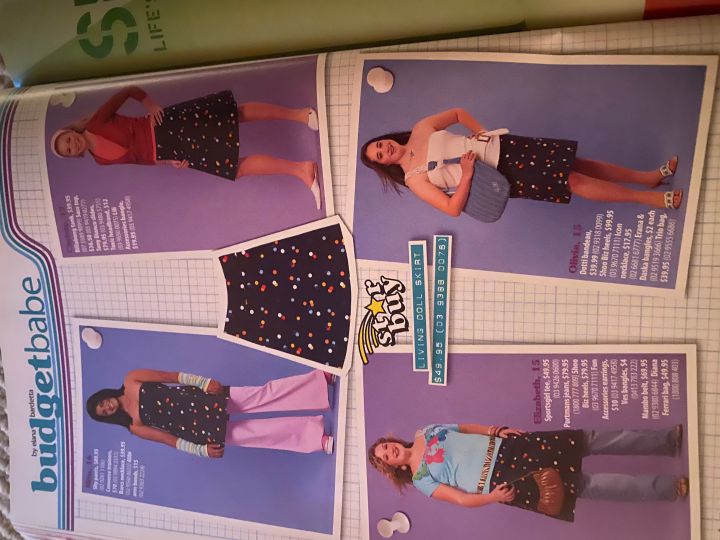 MEL: I absolutely wore some version of it to every 15th birthday, especially if boys would be present. Gotta look fly in my knee length skirt over some wide leg jeans, bebe.

COURTNEY: Hands up if you, like me, had an insane amount of Smooch bedding. 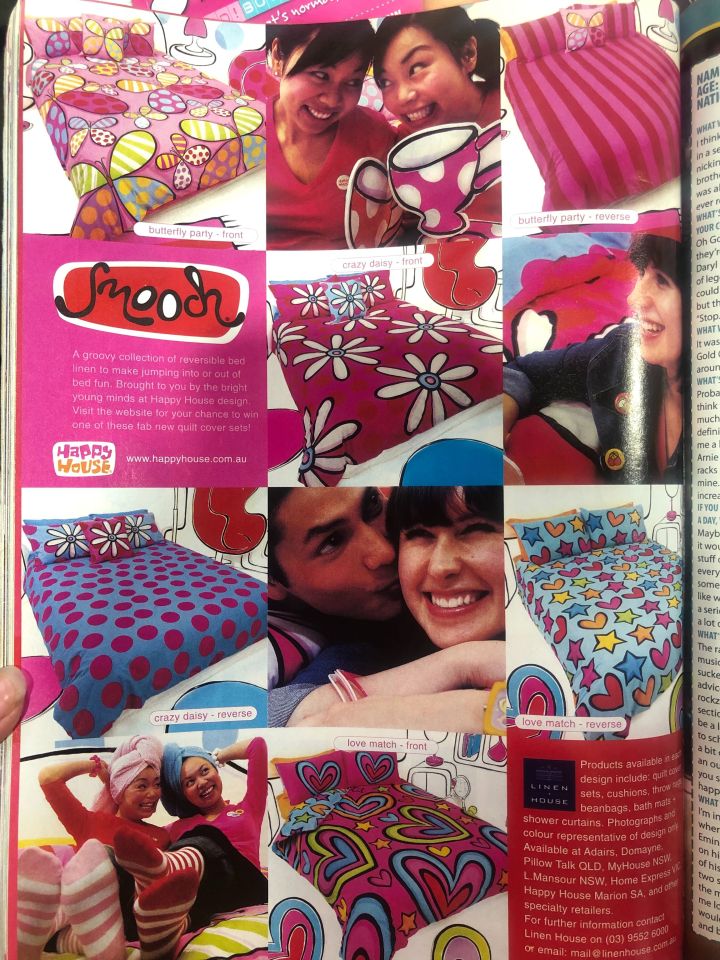 MEL: Mum would never let me, that and the blow-up furniture – denied.

COURTNEY: New one – what if kitten heels, but also thongs? 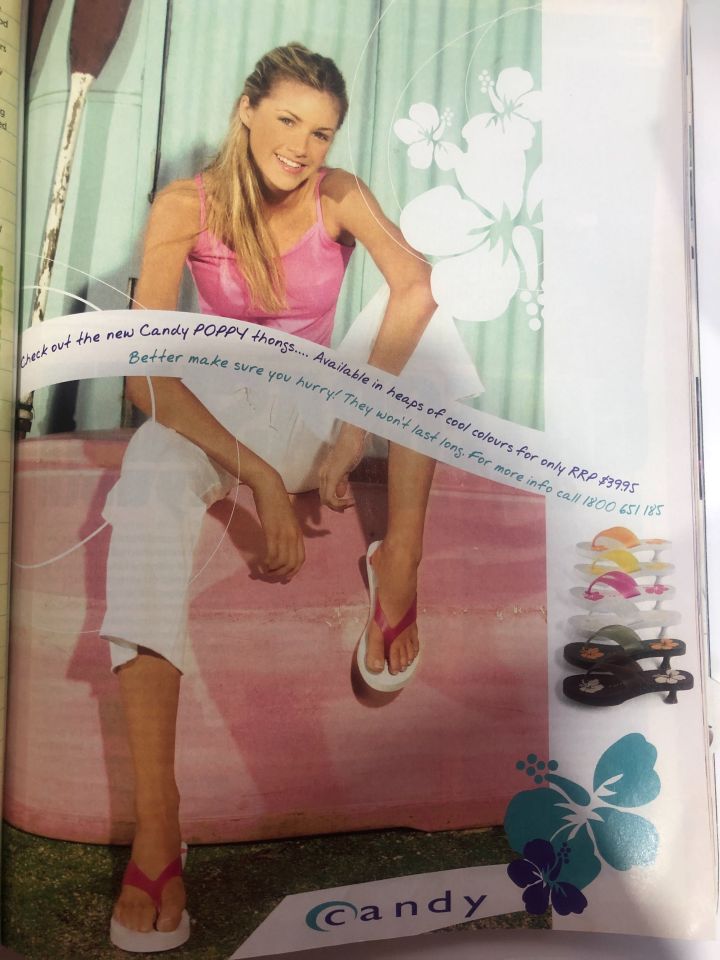 MEL: Ok these I absolutely had, but not the heels ones the wedge ones. I also had too many of these skirts: 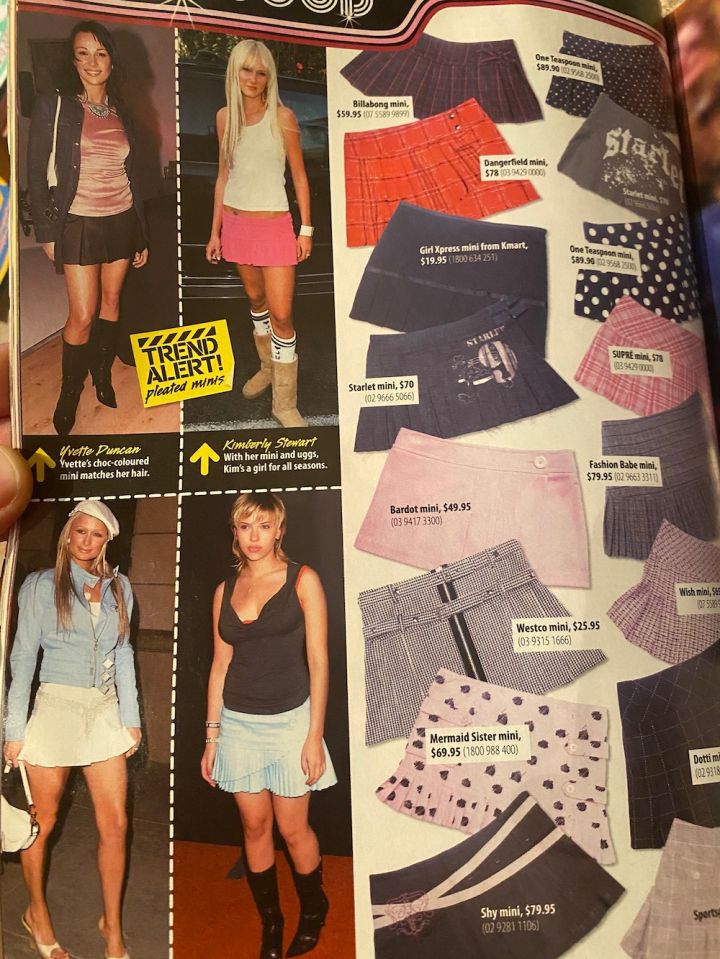 COURTNEY: Ultra mini skirts, a trend i loved to hate. Uggs and a midriff top, with your tiny bowler bag. And a blazer if you needed a jacket. 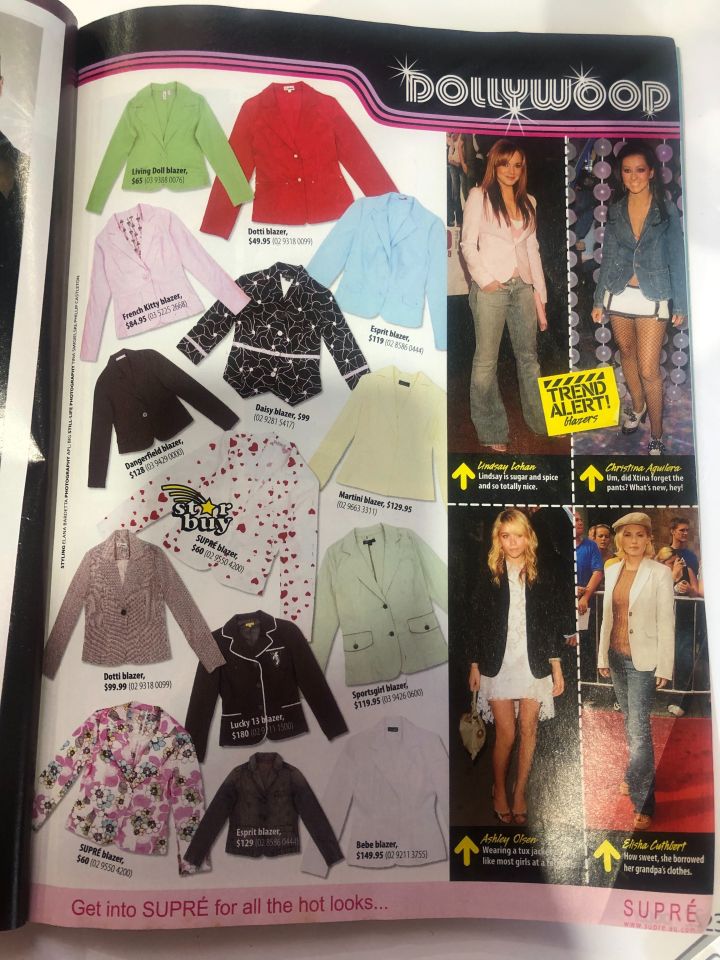 MEL: Why did we incorporate such a business-staple piece into our tween wardrobes. No one under the age of 18 should be in a blazer unless it’s for school.

COURTNEY: Prefects and school captains only. Also, I’m absolutely of the firm belief that if bucket hats had a resurgence in the last couple of years, then visors are definitely about to have their moment in the sun again. 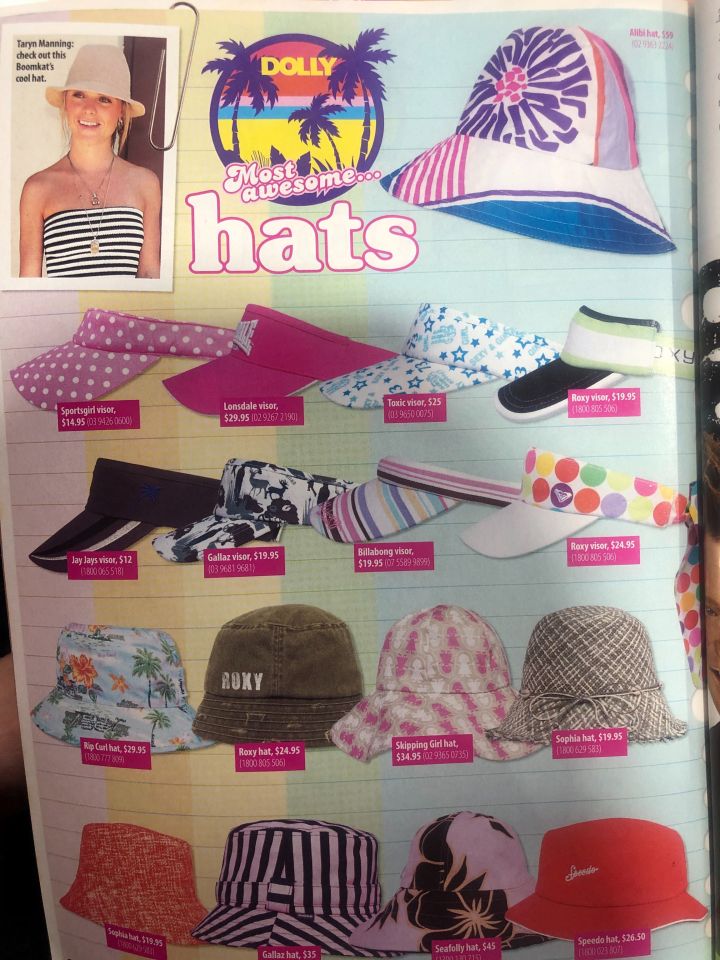 MEL: I can see it happening, although I don’t know if a spotty Quicksilver version, or in fact any of those will ever make a comeback. Doomed to lurk in the $1 Vinnies bin forever.

COURTNEY: Christ, remember when shimmer and frosted looks were like the adult step-up from covering yourself head to toe in body glitter? 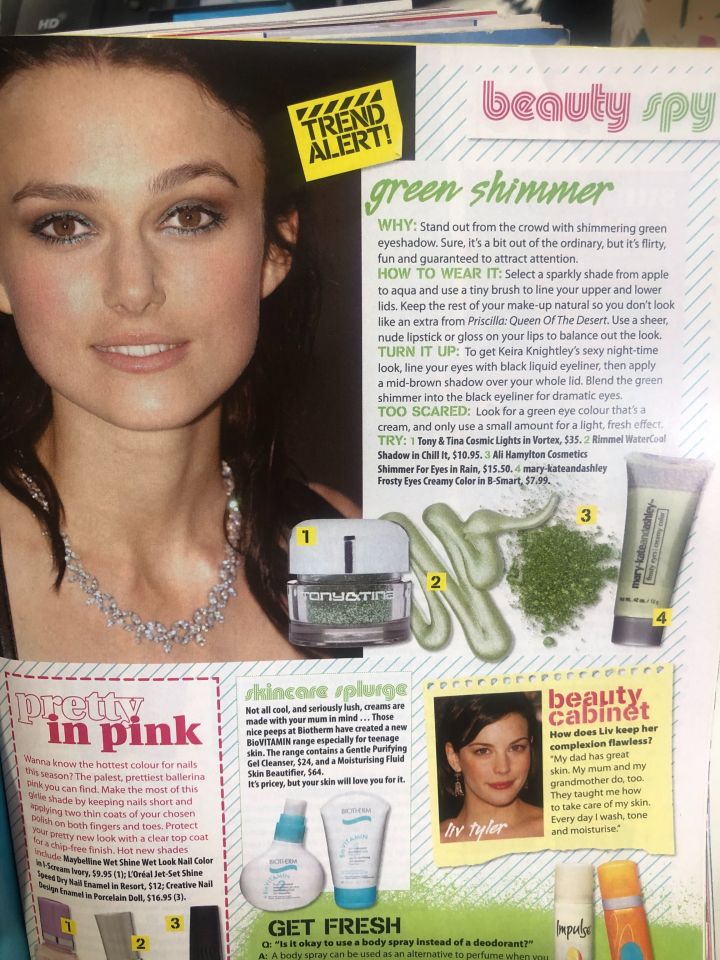 COURTNEY: WHO would wear green shimmer EVER.

COURTNEY: Oh my god here’s an iconic thing that was 100% in everyone’s first-ever makeup collection: 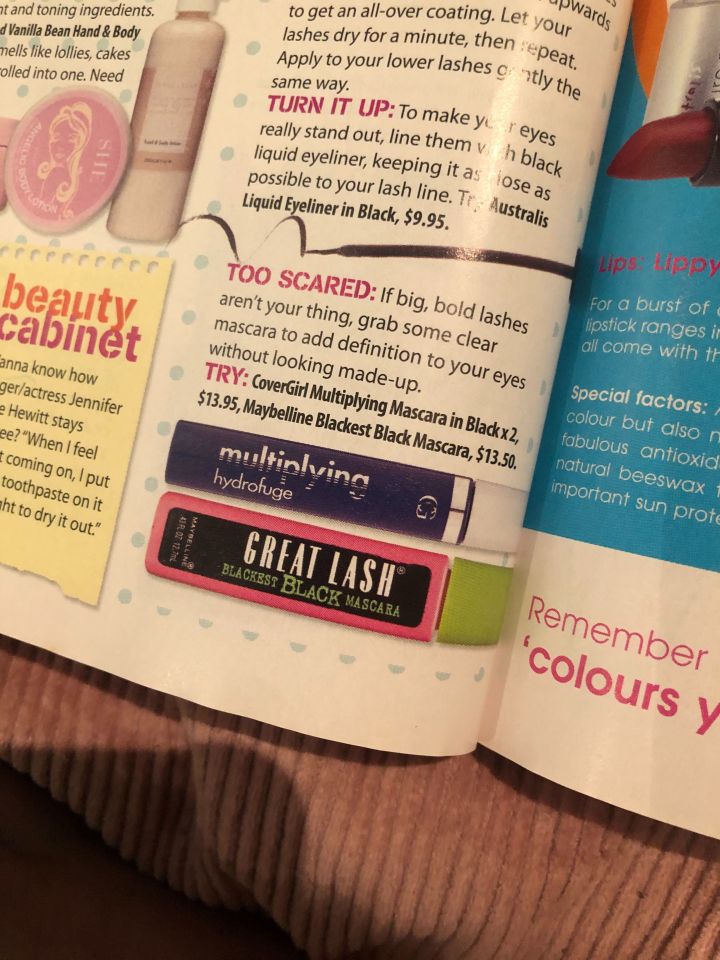 COURTNEY: There’s reason why it has stuck around for like 20 years.

MEL: Tell me you didn’t have 30 of these stashed in your tiny handbag you didn’t need. 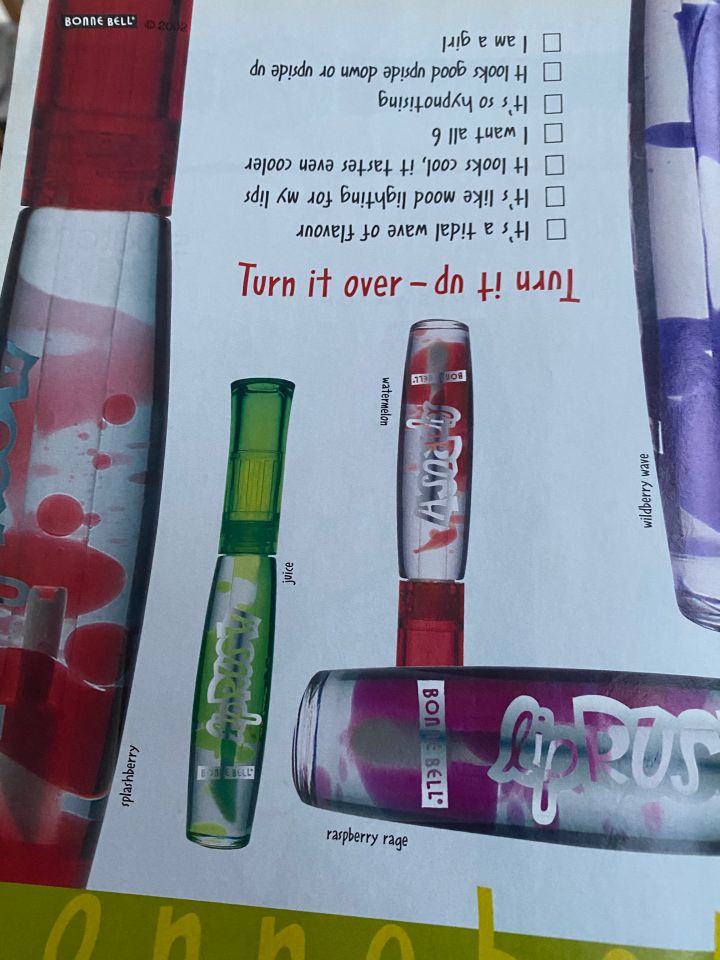 COURTNEY: Oh god, the day one accidentally snaps and leaks too. You can never get that out.

MEL: Bonne Bell gloss, fact, never ever removes from anything. 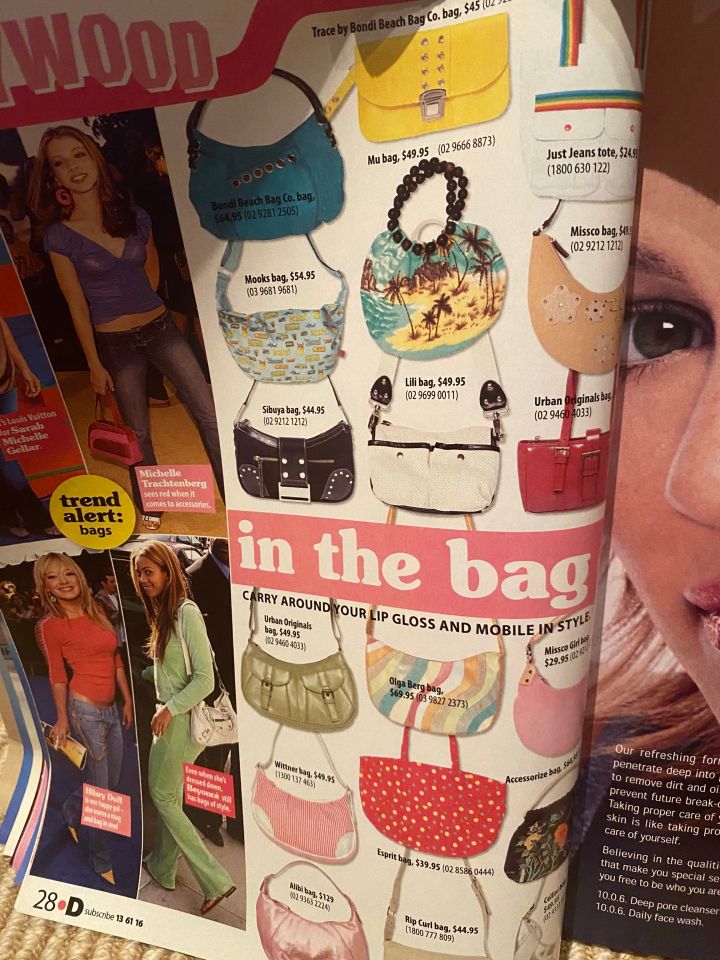 COURTNEU: Literally could fit your Nokia, a single bobby pin, and your lip gloss. Nothing else. Need money? Sorry! Can’t fit!!

MEL: And tucked up right into your armpit. Can I leave you with this trend we should never, ever revisit?

COURTNEY: Lay it on me. 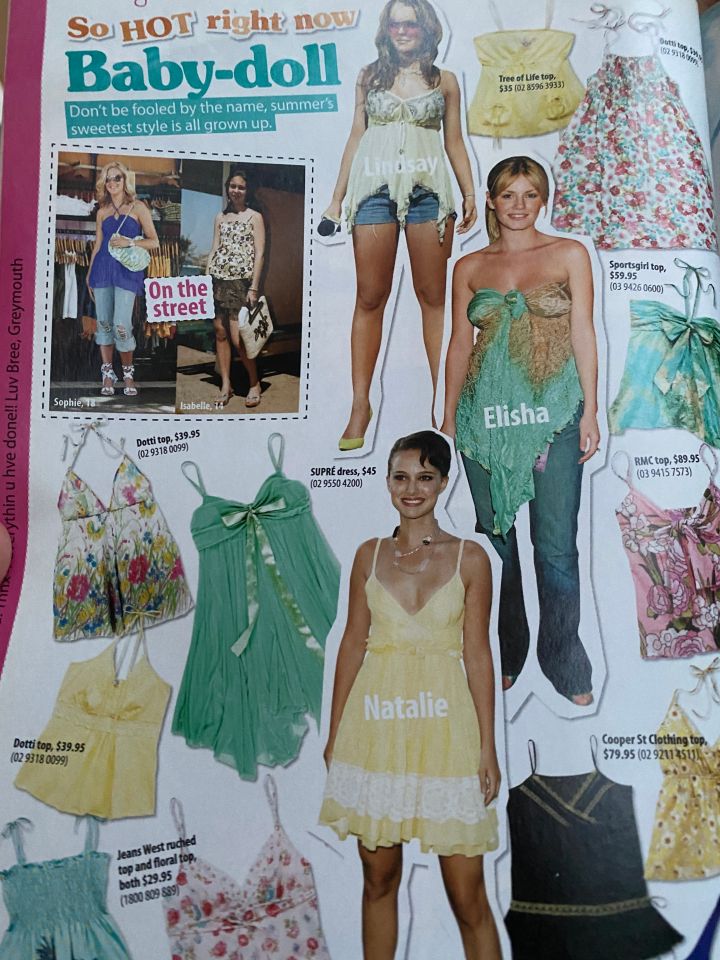 MEL: Why were we obsessed with looking first trimester pregnant, is what I want to know.

COURTNEY: I mean, real good for hiding a too-many-beers-at-the-pub stomach. But everything else about it screams Big Widdle Baby Areas and it’s just, no.

READ MORE
We're So Sorry To Ruin Your Day Like This, But The Useless Belt Is In Fashion Again