Overnight, Urban Outfitters has had to deal with some pretty terrible PR, as they navigate fresh territory and stumble to explain the appearance of a t-shirt with an infamous Chicago gang pitchfork symbol emblazoned across its chest in its online store.

The t-shirt, designed by Australian brand Vanguard and sold through the international, online chain, has troubled waters in the US due to a striking similarlity between its design and the symbol for the Chicago Gangster Disciples, explained by the Chicago Tribune as one of the city’s biggest gangs with “a long history of vicious criminality”. The Daily Mail reports that the Gangster Disciples were connected to 100 of 392 homicides in Chicago last year.

We spoke with Jono Cottee, director of Vanguard, who woke up this morning to a flurry of emails preaching the controversy his brand had inadvertently stirred. Cottee considers the news, which has received rapid, widespread attention across America, was a pretty big over reaction, and obviously unintentional, duh: “It is a pretty widely used symbol, I thought. I thought Raphael the Ninja Turtle carried one around in his shell.” Cottee added, about not knowing the origin of the symbol they designed, “I am not up to date on my ‘Chicago Underbelly’ series 4 I guess. For us it was more of a trident/satan reference if anything.”

The shirt was quickly pulled from the Urban Outfitters website after comments that walking down the street sporting the symbol could literally be a fashion killa: “I was told that you could be literally ‘shot in public if you wore it in Chicago’ so they [Urban Outfitters] are not going to risk that over a tee shirt. It’s all pretty funny from our end really but I guess we are pretty sheltered from that sort of stuff here.”

You won’t have any luck finding it on Urban Outfitters, but if you fancy wearing some dangerous attire that might attract a Chicago-based bullet, you can still order the shirt from Vanguard here. And it’s on sale!

Vanguard’s shirt, and graffiti of the Gangster Disciple’s symbol to compare: 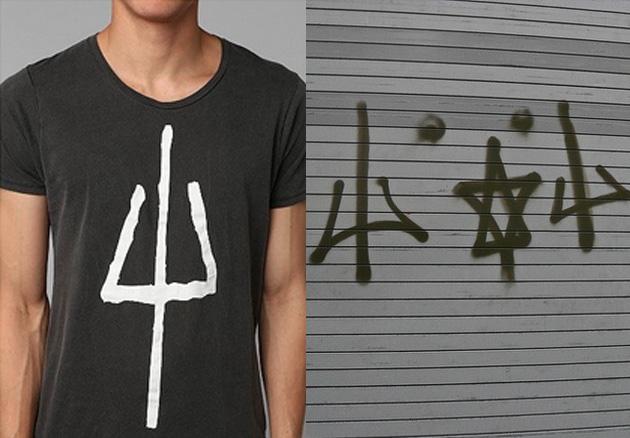