It’s ARIA Awards night, guys, the Aussie Grammys (nobody calls it that) – a chance to celebrate some of our best musos and all their accomplishments this year. This year the focus is on congratulating Amy Shark for making a killer debut in Love Monster, garnering a whoppin’ nine noms this year, and on Courtney Barnett for coming in with eight for her second record, Tell Me How You Really Feel.

But it’s also a fashion parade for celebrities of all Lists, and an opportunity for musicians to wear outfits that are deeply impractical for choreographed dancing, wielding a guitar like a weapon.

It’s only fair that we compile the top and the most blessedly out there red carpet looks because these people braved the torrential Sydney storms to come out in their mostly shiny, and also pink, fineries. Everybody’s looking glam, and we’re into it. 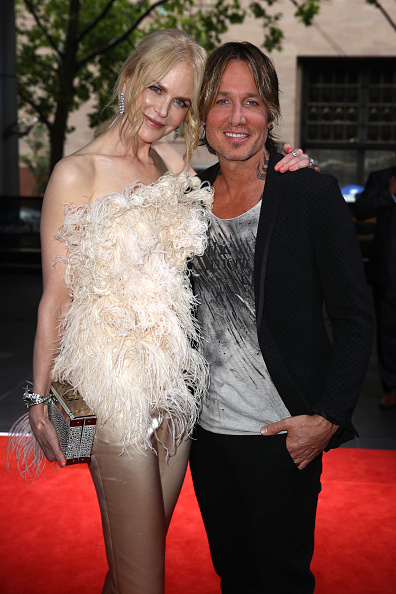 Of course Hollywood royalty Nicole Kidman is here to support her ARIA host hubby Keith Urban, and of course she is wearing shiny pants and a feathery blouse. She is the queen of red carpets. Urban is wearing a casual tee. 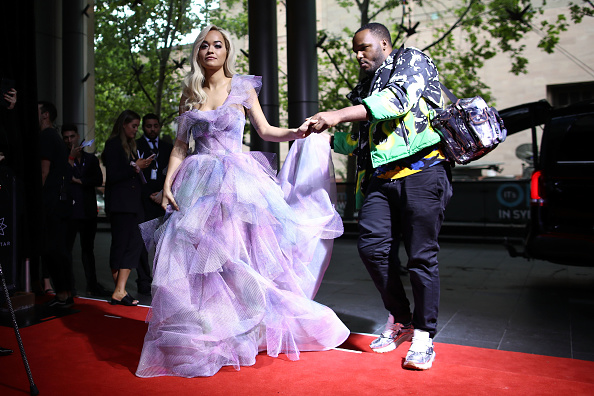 Rita Ora looks like a Disney princess, it’s amazing. She is the embodiment of every young girl’s fantasy to wear a lilac tulle gown in a public place. 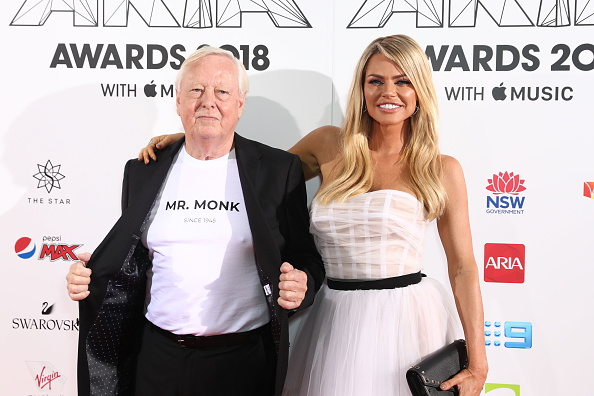 There is nothing more wholesome than bringing your dad to the ARIAs, and look, there, Sophie Monk’s gone and done it. She’s in a white strapless dress, and yeah, it looks good on her, but what about Instagram-famous, good sport dad, Andrew and his suit jack + Mr. Monk tee combo. 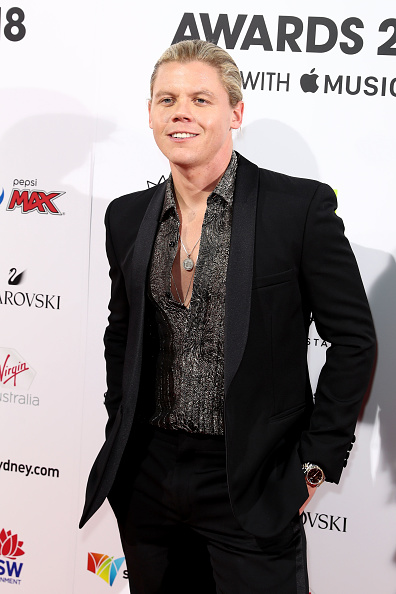 Conrad Sewell has come straight from the beach to the ARIAs, pulling his long blonde locks back into a ponytail and pairing a shiny silver shirt with a classic blazer. Top it off with that necklace and he’s a character from Puberty Blues on formal night. 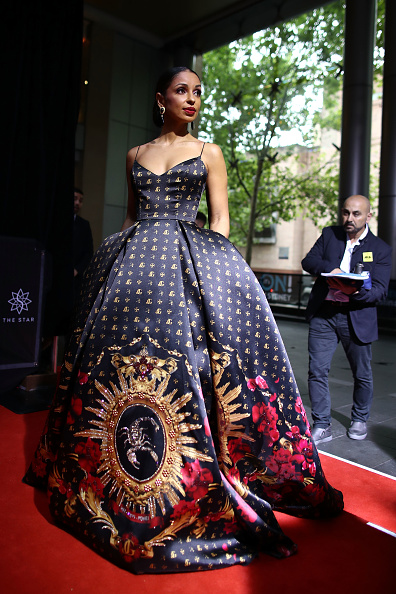 American R&B royalty has also turned up in an actual gown, presumably over a petticoat, and everything about it is incredibly beautiful, and may be the top look of the night. She could legit be going to a Royal Wedding rn. 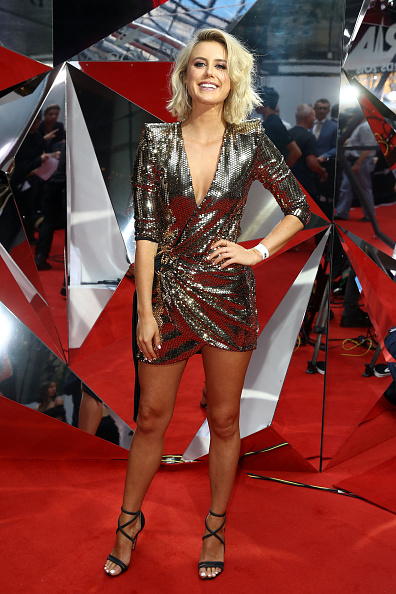 The Loop host Liv Phyland is the first to turn up shiny all over and she could blend right into the mirrored backdrop. This dress is very cute on her and we hope that her rumoured squeeze, the strong-jawed vet Dr. Chris Brown appreciates it as much as we do. 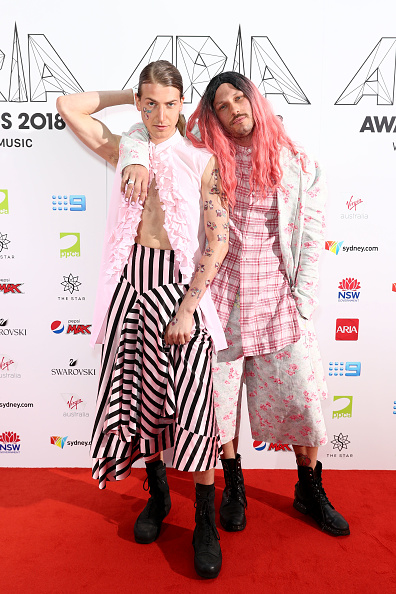 These lads are bringing the fashurrn with their light pink looks, including very vivid hair from Kelly. Wilkins’ unbuttoned sleeveless blouse with pink striped skirt combo is something we would like to be able to wear. 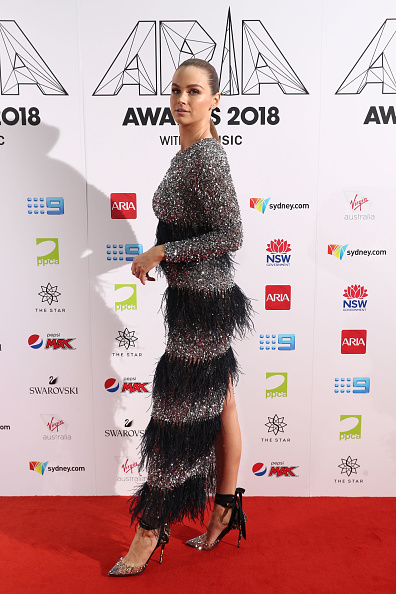 The model and E! presenter has also gone for sparkly, but has added black fringe detailing which should make this very fun to swoosh around at the afterparty later. 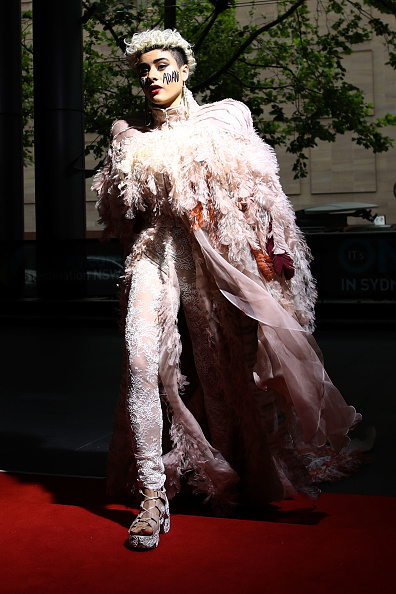 Montaigne arrived fierce and dusty pink in a fuck-off feathered cape. But it’s the political message on her cheeks that is the most bold thing about her vivid outfit: STOP ADANI.

Just quickly, the proposed Carmichael Coal Mine in Queensland from Indian mining conglomerate Adani Group has been the subject of protests since its conception almost ten years ago, because we don’t need a new coal mine basically, and its construction and use is likely to be harmful to the Great Barrier Reef, not to mention the climate. It’s no good basically, and Montaigne is using her face to share that message. It’s brilliant. Kudos to her. 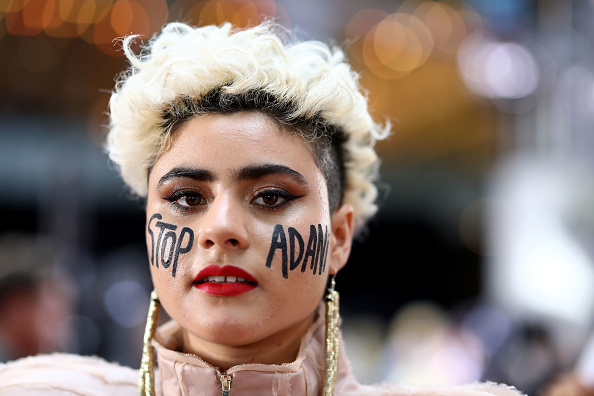 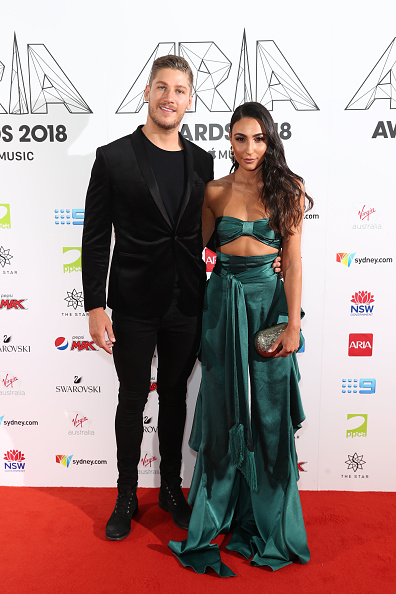 They may have found love with each other off of Majorca – although Damir came away from that one $25K richer, and with a shitty ex in Grant Crapp – but at least now they get to be together at the ARIAs. Damir is dressed like a shiny mermaid and Thomas accompanies her in an all black look, so as not to distract from her teeny tiny form. 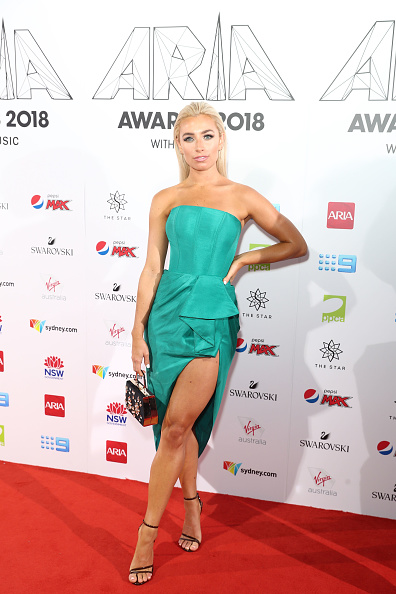 Cassidy’s wearing a strapless shiny green dress too, with a nice and high split, and a touch of peplum. Imagine having this opportunity to get a tan and whip out one of those fancy dresses you bought on sale from The Iconic? You could be just like Cassidy here. 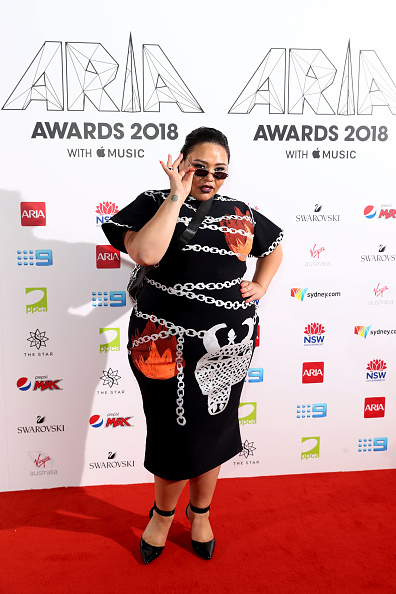 Kira Puru’s graphic dress is topped off with very-in small sunnies, and she looks fiery (hurr hurr hurr) and like a curvy gal goddess. It’s a 10/10 from us. 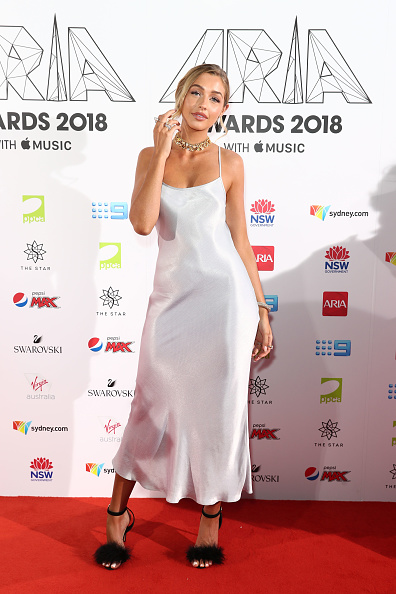 Here’s influencer/YouTuber Sammy Robinson in a classy full-length slip dress that hugs her in all the right places. She’s chucked on some chunky jewellery and pom-pom stilettos and she’s a kween of the carpet. 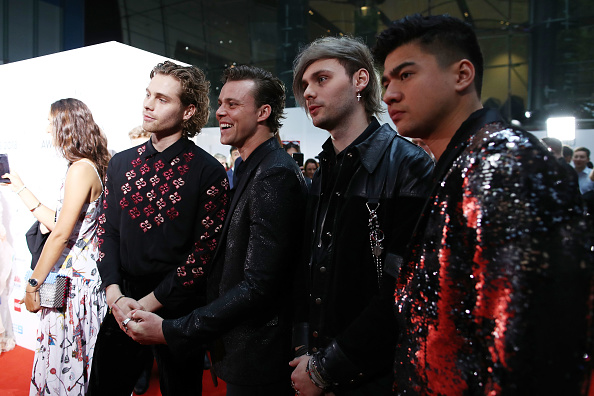 The 5SOS boys, up for many awards, are looking demure in mostly black. There’s a pop of patterned red, and a sparkly jacket amongst them, but it’s mostly the subdued leather brooding look these teen heartthrobs are going for. 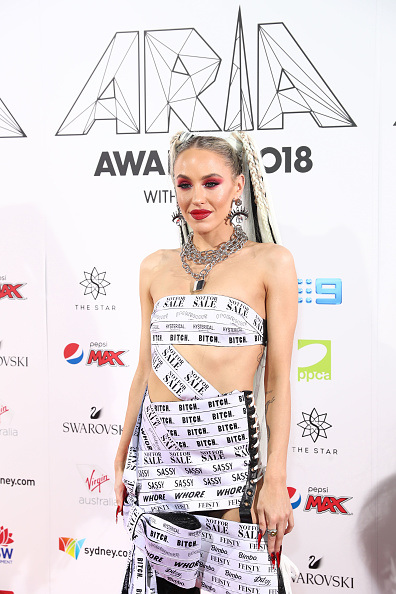 Imogen Anthony – a woman who is dating Kyle Sandilands – is basically wearing nothing, and if you can’t wear ribbon with the words ‘Whore’, ‘Bitch’, and ‘Sassy’ on it to the ARIAs, where can you wear it, honestly? This is a look. 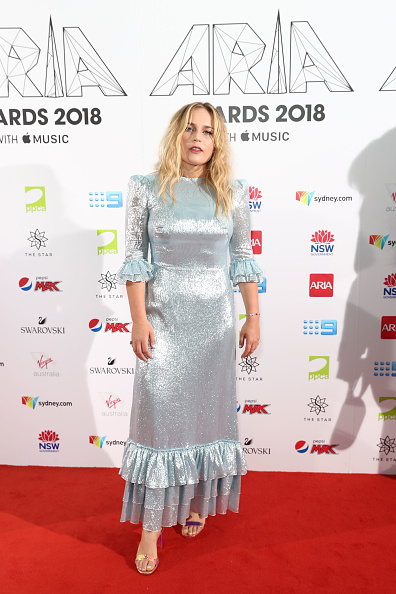 Jack River is up for Breakthrough Artist, and if she does not win that, she has definitely one for most likely to be cast in a Little house on the Prairie remake or a TV show about cults. It’s a boho vibe we’re actually extremely into, and would probably wear to the office if the shiny blue fabric didn’t wash us out. 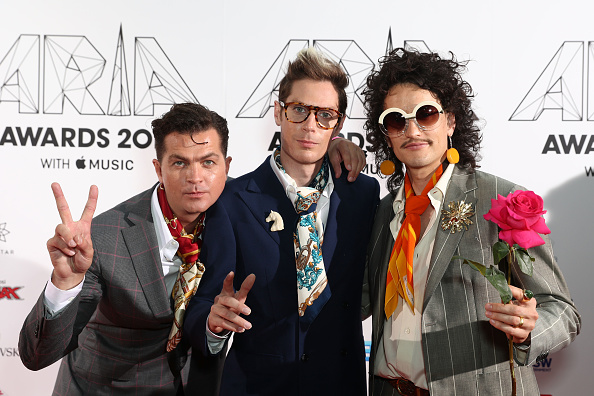 Of course Client Liaison have come out in their finest ’80s outfits, bright neckerchiefs and all. Harvey iller’s even got a big pink rose and lovely orange earrings on. We would like to have the opportunity to party hardy with these lads after the ceremony. 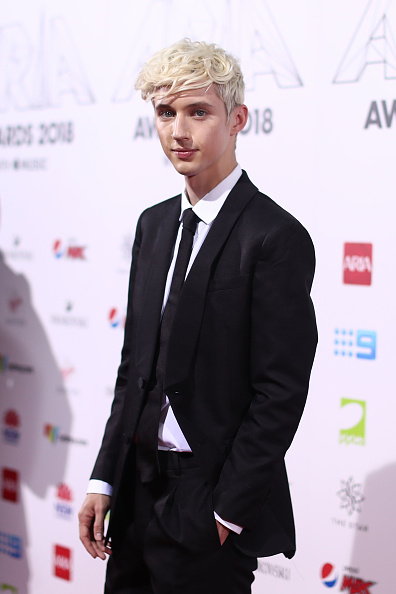 Darling boy Troye Sivan may not go home with any ARIA Awards tonight – or maybe he will – but he will go home with the nation’s hearts because he just looks so kind in his black suit. He could be Best Man at a wedding. 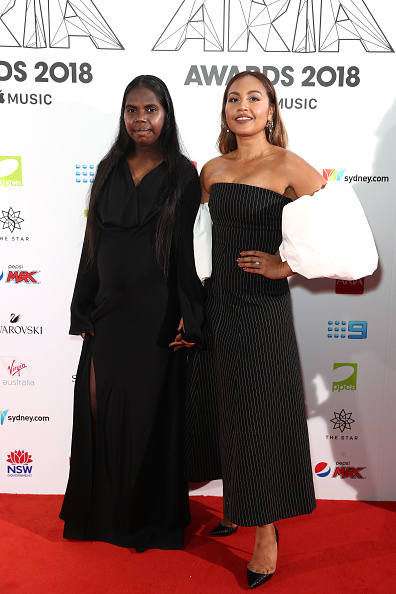 Gurrumul‘s daughter – likely to accept more than one award on behalf of her late father – Jasmine Yunupingu showed in a classy black dress with gorjuz pop queen Jessica Mauboy whose big puffy white cloud sleeves remind us of the weather. 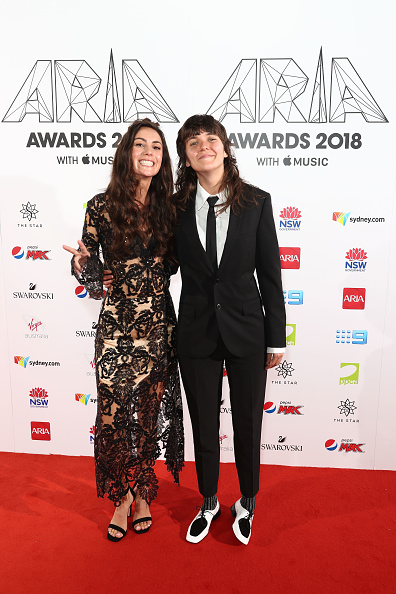 Amy Shark and Courtney Barnett, while up against each other in basically every category, look like good buds on the ARIA carpet. Shark’s in a slinky sheer/lace dress, while Barnett’s in a dapper suit and a pair of excellent white shoes, and my cold heart is warmed by their friendship. 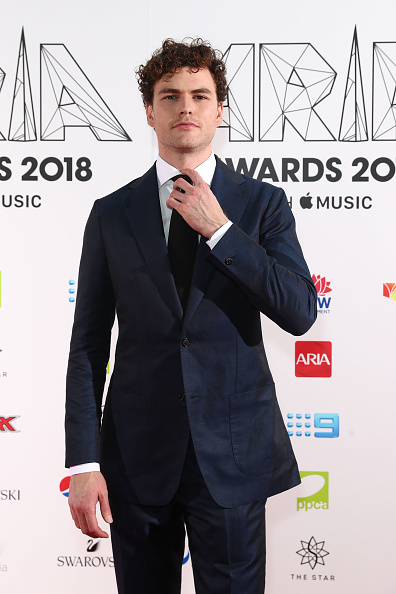 Vance Joy is a gorgeous boy in a little blue suit and I won’t hear another word on the matter. 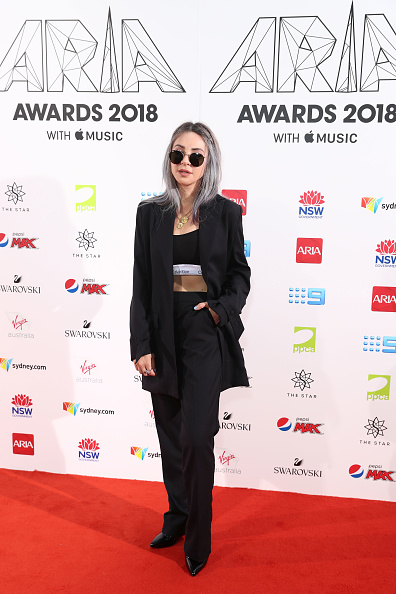 Alison Wonderland, resigned to losing Best Female Artist to Amy Shark, turned up in a combo of sports luxe and smart casual, wearing a trendy af pair of sunnies and a Calvin Klein croptop as a shirt, with a blazer and smart slacks. She looks cool as shit. 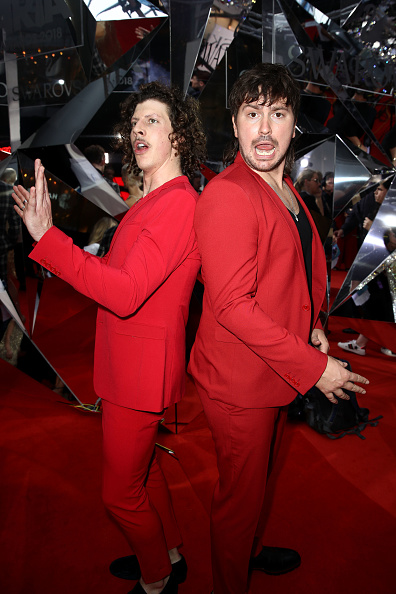 The Peking Duk boys turned up in matching red suits with black tees and you better believe they’re going to have a better time tonight than literally anyone. Doesn’t even matter if they win Best Group. 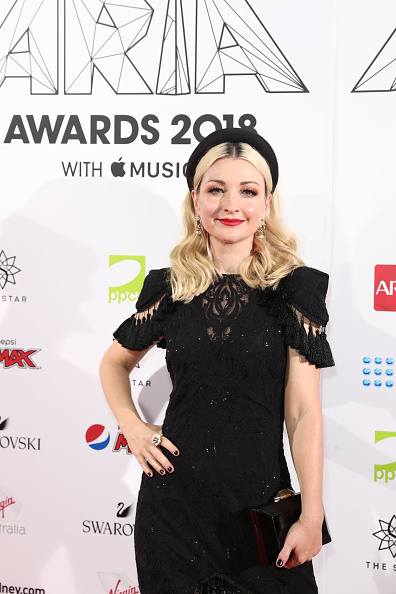 Kate Miller-Heidke’s wearing a black dress and matching hat that’s a bit sparkly, with tassled sleeves. She’s channelling Addams Family vibes, and that is very cool with us. 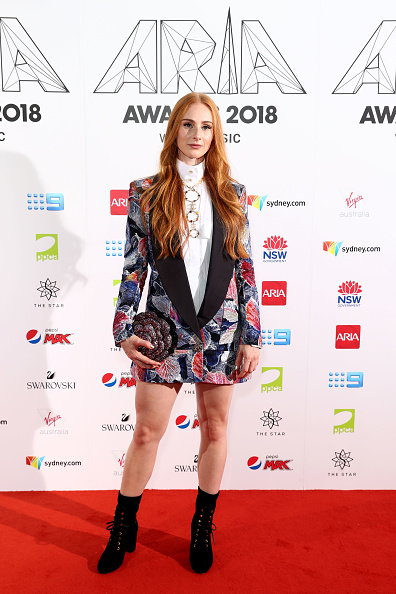 The singer has gone for a graphic, tailored blazer dress with a high-necked white blouse, statement jewellery and matching clutch and the whole thing is so very cool we expect to see it replicated at office Xmas parties everywhere. 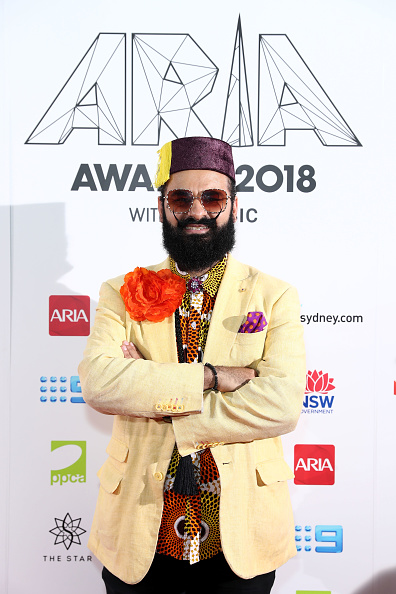 The composer turned up in his special occasion fez, with a yellow blazer and a very colourful statement shirt, plus a real bright pocket square and fuck-off big lapel flower. He seems very pleased to be there. 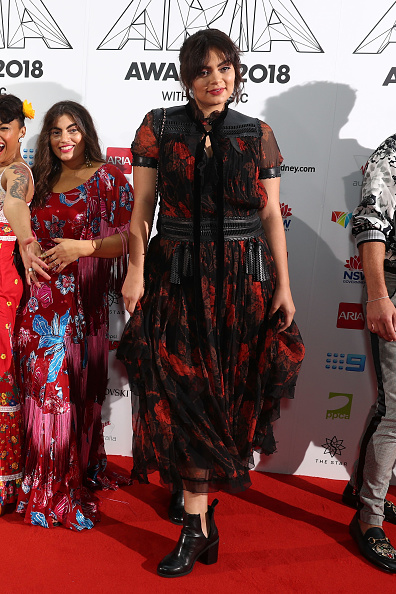 Thelma Plum’s basically glowing in a black and red full-length dress. It’s the type of outfit we’d wear to casual brunch with mates and that helps Plum look super at ease on the red carpet. It’s the ARIAs! Laidback, booted looks rule here. 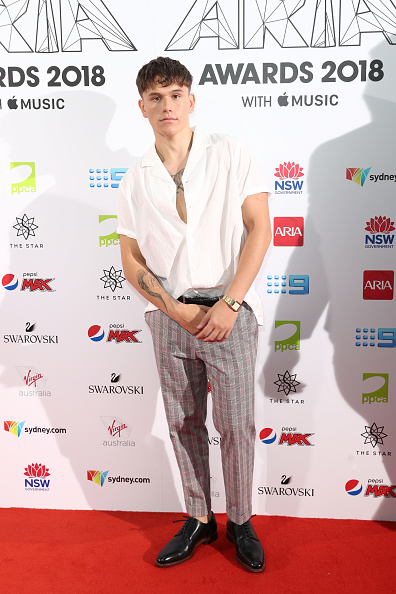 Jai Waetford in classy grey slacks and an open-necked short-sleeved white shirt probably has some teen girl’s hearts a-fluttering and deservedly so. 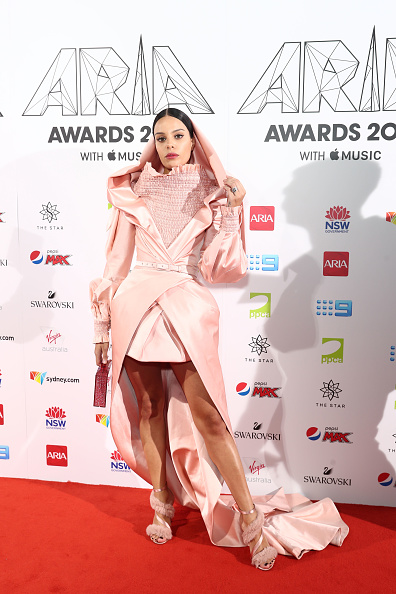 Stylist Fleur Egan – doing such a good George Maple impression she had us, Getty Images and a whole heap of other media organisations fooled –  is keeping up the dusty pink, it colour, trend with this super brave number that she somehow pulls off. it has shoulder pads, it has a train, it is so OTT we don’t know how anyone could top it.

You can catch the ARIA Awards on Channel 9 at 7.30pm tonight.