Got some people you hold near and dear in close proximity to you? Good. Get ready to ruin that relationship forever by arguing over something that’s not even real to begin with.

We as Australians love two things: an ice cold beer on a warm Christmas morning, and insisting we’re just as tough and cool as those seppo gronk Americans.

That second one so much so that we constantly compare ourselves to the US. Melbourne is the New York of Australia. Movie World is “Hollywood on the Gold Coast“. The stars at night are big and bright *clap clap clap clap* deep in the heart of Dubbo. You know how it goes.

For reasons that can only be purely sadistic, some hater of harmony has slapped together a map of Australia that labels each state and territory with its US equivalent.

You’re gonna want to find a good place to sit down and tall glass of water for this one, because this won’t be a quick argument.

Someone has made a map of Australian states with their US equivalent and it’s pretty spot on tbh pic.twitter.com/eiC8VQa3Gp

Look, I can see what they’re going for there. Queensland is the retiree state. Western Australia has the size. South Australia is just kinda… there. And the Northern Territory is that weird place no one ever seems to go to.

But come on, calling the ACT the District of Columbia is fucking lazy at best, and labelling Tasmania as Rhode Island is profoundly offensive when it so very clearly Australia’s Oregon in climate, environment, demographics, and culture. CLEARLY.

In fact, you know what? Here. I took the liberty of making a much more accurate and therefore better version of the map. 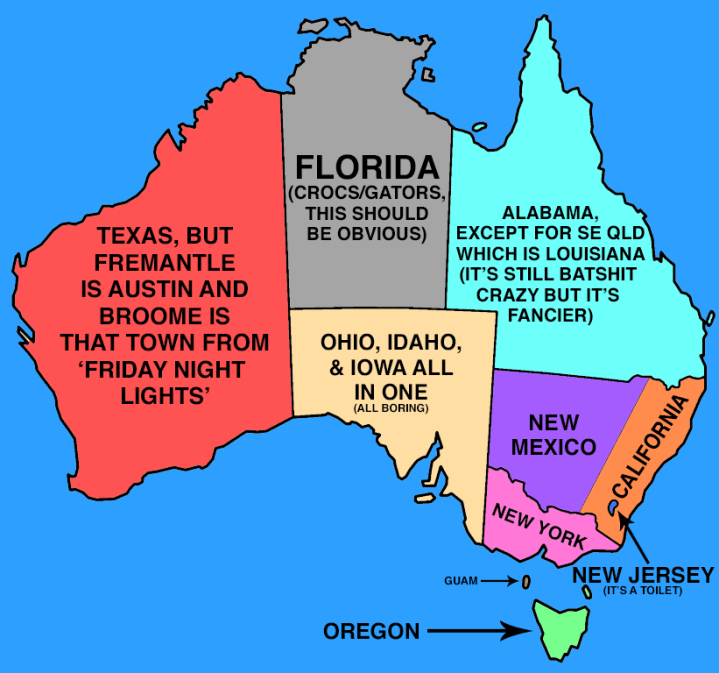 Clearly, this should settle any and all arguments on the matter.