Nearly every politician in Australia falls into one of two camps; either they are career politicians who went to sandstone universities and rose to prominence through their party’s student politics wing, or they are an outsider who rose to prominence because they were willing to say insane things about minorities repeatedly and publicly.

All of One Nation‘s candidates fall into the latter camp. You can’t fault them for being passionate and willing to work to represent their views in Parliament, but you can definitely fault them for those views being unhinged and for being wildly incompetent at their jobs.

In the push to get as many warm, xenophobic bodies into seats as they possibly can, they’ve said “yes” to pretty much anyone who says they want to run as a One Nation candidate. Surprisingly, choosing strangers to run for political office based solely on how much they hate Muslims has not gone entirely without a hitch.

Recently, they’ve had to ditch one candidate for homophobia and another for Port Arthur trutherism. One quit the party after being scolded for being homophobic. Another one again came under fire for a bizarre thinkpiece he wrote in which he attacked single mums for being “lazy” – although One Nation didn’t ditch this one, responding to the media thusly:

To all the fat lazy politicians & fat lazy journalists in the fat lazy media playing fat lazy, PC, identity politics- The answer is no.

If that motley assortment of weirdos wasn’t enough, another one of their candidates has been found to be somewhat… well… odd. Michelle Meyers, who’s running for the seat of Batemen, has left a lot of people scratching their heads over a Facebook post she made in November last year about how the gay community is using Nazi-style mind control to sway people’s opinions on same-sex marriage. 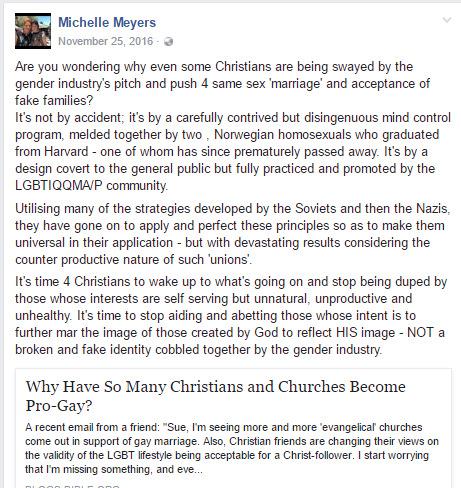 While people with a brighter outlook might attribute growing acceptance of queer people in the straight community as a sign of positively improving attitudes, Meyers reckons it’s definitely mind-control:

“Are you wondering why even some Christians are being swayed by the gender industry’s pitch and push 4 same sex ‘marriage’ and acceptance of fake families?”

“It’s not by accident; it’s by a carefully contrived but disingenuous mind control program, melded together by two Norwegian homosexuals who graduated from Harvard – one of whom has since prematurely passed away.

“It’s by a design convert to the general public but fully practised and promoted by the LGBTIQQMA/P community.

“Utilising many of the strategies developed by the Soviets and then the Nazis, they have gone on to apply and perfect theses principles so as to make them universal in their application – but with devastating results considering the counter productive nature of such “unions”.”

This definitely sounds true and also real to me, I’m also interested to find out what exactly the “gender industry” is and who the LGBTIQQMA/P community” encompasses. The WA Liberal Party only last week announced that they would be giving preferences to One Nation over their buddies the Nationals. Clearly, you’ve thrown your lot in with a pack of geniuses.

Sources: Out In Perth.