Fashion Week Australia, just like its international counterparts, sees the glitter-shitting mob descend in droves to catch a glimpse of who / what’s très chic or très fou.

If you’ve coveted an invitation to a show – or, in a very crass move, requested one (perish the fucking thought) – it’s worth keeping in mind that a mild interest of the industry won’t be enough to sustain you.

Avid attendees can go for days on end without food or water. The only substance they require is a steady diet of subordinates remarking, “bitch you look FAB-U-LOUS,” and the charred limbs of interns.

These people, in an overarching sense, can be allotted into several personality types that are worth familiarising yourself with. Why? Oh, just so you can, y’know, avoid them like Ben Cousins avoids sobriety. Best of luck ladies and gents, we sincerely hope to see you on the other side.

Chantelle has no idea whose show she’s about to walk in, her mind is far too preoccupied with mapping out her durry schedule for the day. She hopes that the fifty-something hairdresser will finish constructing her up-do (which’ll eventually look like a nest that a spastic sparrow has built on the back end of a bender) so that she can dip out to punch a hot one before they’re prompted to hit the runway.

An equally skeletal model walks past Chantelle en route to get her own hair did, leaving the feint smell of ciggies behind her. Chantelle’s hands grip the arms of her chair with the vigour a sadomasochistic would take to choking their gimp. The scent has further aggravated the fragility of her soul that’s copping one hell of a comedown from all the caps she chewed the night before. This bitch needs a fag, and she needs it now.

The show’s coordinator calls for their attention and announces that there’s been a last minute wardrobe reshuffle. Everyone will need to be close by in case an outfit swap-out is requested by the designer, which of course means that Chantelle will be denied her smoking privileges.

When she eventually takes to the catwalk, a single tear rolls down her face in honour of all the durries that could’ve been chained. On the plus side though, her sad theatrics landed her a new contract and a $8,000 signing bonus with Viviens – not to mention the standing ovation by bloody Edwina McCann, Kellie Hush and Christine Centenera.

Carmen Von Toohardtopronouceinstein’s face remains unflinching beneath her sunglasses as she reviews the runway from her front row seat. Another year, another lacklustre showing. But does this cause Carmen the slightest shred of concern? Christ no, darling. She’s the modern-day Macgyver of publishing who’s capable of pulling together a revered winter spread with nothing but three toothpicks and a manila folder.

Editors from different publications, all of whom sit a strategic five seats apart, don similarly blank expressions as they wait for the room to fill. There’s no ill-will between them even though they’re direct competition – quite the opposite in fact. There’s a great deal of respect expressed in their pursed-lip, head-nod greetings that are exchanged when their paths are forced to cross. The salutation, something which certainly isn’t dealt lightly, is an acknowledgement of the collective influence these women share. On any one of their orders, the acceptable hem-line height of Australia could be raised so high you’d need a gynaecologist to find this season’s must-have skirt.

Carmen always thought that the power would excite her, but possessing any positivity in her position is literally impossible – it was beat out of her, and out of those before her, during the vicious process of securing her title. Carmen and the fellow bastions of her industry have moved sideways so many times in their careers that they’re not even sure if placing one foot in front of the other will result in stepping in the right direction.

Don’t bother saying hi, there’s a higher chance of Tony Abbott dropping the most fire mix-tape of 2016 than receiving a reply.

Jason’s body is a temple that’s been built on the back of a gluten free diet and a strict CrossFit regiment. Admittedly, his temple is frequently pillaged by hefty amounts of amphetamines, but he believes the volume of quinoa he explosively digests twice-weekly ought to balance everything out.

Mummy and daddy tightened their belts upon discovering that Jason wouldn’t be putting his dick inside anything that’d result in grandchildren anytime soon. So, to maintain his lifestyle – one that’s centred around his boy-toy Pablo’s yacht, and its fortnightly Speedo or GTFO themed soirees – Jason turned to supplying his nearest and dearest with the purest cocaine Sydney has to offer. Unbeknownst to his clients, his “A-grade shit” gets its main kick from the meth its been cut with. But hey, repeat business is repeat business, right? Even if it’s fuelling an underground sect of equally affluent and fabulous crack heads.

Jason’s a bonafide semen demon, and a fabulous one at that.

Sarah was ecstatic when she secured a coveted intern position at this year’s Fashion Week. Upon reading the acceptance email, she had no qualms with skipping her Friday lecture because in her mind, who needs a fickle fashion degree when you’re about to be rubbing shoulders with the biggest names in the business? Besides, she didn’t think she’d be able to contain her inner-wank around her classmates, being so far ahead of them career-wise ‘n all.

Fast-forward a few weeks and Sarah is now heavily medicated for anxiety. Most of her clothes have been ruined by spilt coffee orders. She’s met a grand total of zero influential people, and failed the semester.

Was it worth it? Nup.

Sarah, like all those before her and all those that’ll come after, has worked herself to the bone for a resume inclusion which does diddly-fucking-squat to further what will be a hugely stagnant and unsatisfying career.

Once upon a time, when the internet had a softer vice-grip on society, a blogger’s role was to write content that accompanied imagery. However, much like the American Apparel Skater Dress and Michael Jackson, those days are dead.

Rachel (more commonly know as @wanderlust_hunter_) has heavily capitalised on this transition away from a constructed narrative, chiefly because she can’t write for shit. What she can do though, is take a well-lit selfie – and that’s always going to pay more than the musings of a credible wordsmith.

After harassing several PR agencies – offering forward an extremely inflated follower count as leverage – Rachel has copped five invitations to, what could be called, the low hanging fruits of the designer-pool. No fucks are given though, she just needs an excuse to give on the slim chance someone asks her why she’s at Carriageworks. The aforementioned venue is, like, THE place to create spicy, “todays look” themed content, don’t you think reck?!

At night, Rachel prays to the gods of fashion and beseeches them to bless her with a street-style feature on Vogue‘s digital platform. Hopefully they hear her pleas because how else is a girl meant to land herself a following besides a hyperlink to her ‘Gram.

Mercedes-Benz Fashion Week Australia’s going down May 15-20 all ’round Sydney. May god have mercy on us all.

Oh, and check out our carnage coverage via Snapchat using the tile below: 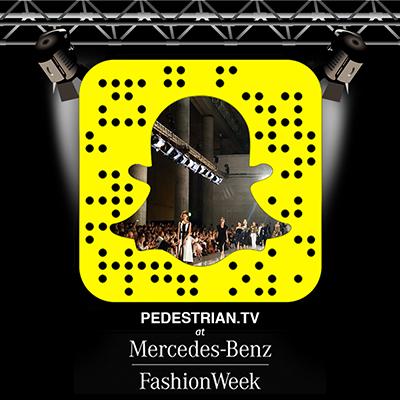