You guys, I know recommending LUSH Shinjuku as a place to visit in Tokyo, Japan is a random thing to say. But HECK, if you froth bath bombs and want to get your hands on a 500g tub of their aggressively popular Ocean Salt scrub then I 11/10 recommend heading on over.

LUSH Shinjuku officially launched on June 1 and PEDESTRIAN.TV, HEHE ME, was lucky enough to be on ground and suss out the four levels of pure goodness.  And folks, I saw and learned a lot so here’s 11 of the best and most random takeaways from the LUSH Shinjuku opening.

I speak from experience here: you really, really cannot miss it even if you have the worst sense of direction ever.

On the ground floor, you’ve got an array of LUSH’s naked foundations, mascara, refillable lipsticks, highlighters (to name a few products), and a florist. On the next level is where you can find those 500g tubs of your favourite LUSH scrubs, creams, and whatnot. Five hundred. 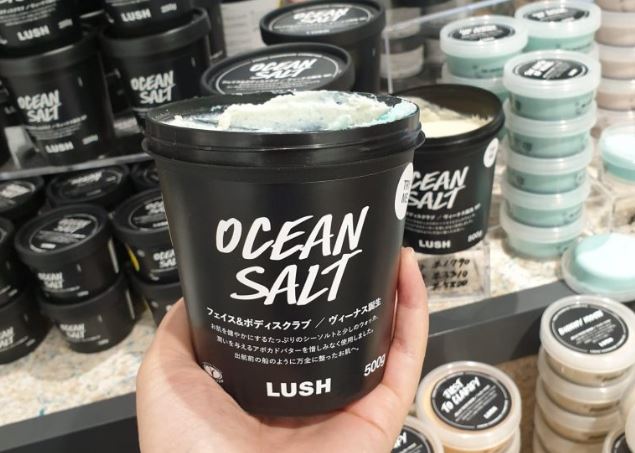 The bath bomb wall – and you’ll definitely want a picture of / with it – is on level three. There’s also a whole bunch of naked products like solid shampoo bars, shower bombs, and reusable bubble bars.

Come September, LUSH Shinjuku will unveil the LUSH Spa. The multi-sensory experience plays on all five senses so if that sounds like your thing, be sure to book an appointment when you’re in town.

LUSH’s ultimate goal is to be totally naked, which means absolutely no packaging. So far, 40 per cent of all of its current products are naked. In fact, zero packaging Naked Shops have opened across the world in Milan, Berlin, and Manchester.

Going naked is a big change though and LUSH knows that.

“You got to change it slowly,” Rowena Bird, one of six of the LUSH co-founders and product inventors, told me.

Rowena, Ro as she prefers, said it’s about getting the customer used to the idea.

“Slowly, slowly, it’ll get to the point where we start seeing the packaged products not sell as well and the naked selling more.

“Then it’ll come to a stage where we can take them [the packaged products] away and nobody will notice and that’s where you want to get to.”

In Ro’s words, naked packaging is more “luxurious” because “it’s not covered by a whole load of crap that you’ll just put in the bin.”

Ro’s working on some new mascara at the moment, sans packaging. Like any other, it’s a cylinder and brush but with a twist.

“It’s a tube made out of mascara and you wet your brush so you’re using it from the inside out,” she explained.

If all goes to plan, the product in its many colours will hopefully launch in the next year or so. If you’re curious, Ro said the naked mascara will use the same sort of ingredients as their Eyes Right.

Since launching its naked shampoo bars, LUSH has sold over 41 million of the bars globally. That’s 124 million plastic bottles saved and 3100 tonnes (3.1 million kilograms) less plastic in the world. That equates to about 3.9% of the Great Pacific Garbage Patch, which just puts into perspective how goddamn massive that ginormous trash vortex is.

Not to mention, a shampoo bar equates to about two to three shampoo bottles or up to 80 washes. That’s just value for money right there.

Take note, this is a co-founder here.

If Ro was stuck on a desert island with just one LUSH product, she’d ask for Ultrabland.

I really love Ultrabland which is one of the best cleansers ever and you can put scrubby things in it and make it into a scrub.

She also uses it every day.

Charity Pot I love for completely different reasons. I love the smell of it, I love it on the skin, it’s a beautiful product but I love the fact that it supports seven regenerative groups of farmers and every time somebody buys a pot, they’re getting a great product and we’re getting money going into charity.

6. This One Bloke Used To Stick His Tongue On Bath Bombs (That He Bought)

I, uh, I ask random questions sometimes but surely I’m not the only one that walks into LUSH and occasionally thinks: Bloody hell, I’d eat that.

“We used to have a ballistic bath bomb called the Fizzio,” Ro said. “It had a lot of spices and mustard in it – this was early, early days – and we used to have someone come in and buy one a week, just to lick it.”

“They used to lick their Fizzio because it would go fizzy in their mouth and it was really tasty ‘cos it’s got a little tang, a little fizz, and it’s quite spicy.”

7. How To Get The Perfect LUSH Bath Bomb Swirl

This tip comes from Jack Constantine, LUSH’s chief digital officer and bath bomb extraordinaire. And really, it’s as simple as spinning it on the way in. Really, that’s it.

Jack, a true bath bomb wizard, came up with the Ariana Grande Goddess bath bomb, inspired by her ‘God Is A Woman’ music video. The bath bomb is gorgeous but it’s also a celebration of womanhood.

When I was doing Goddess, I was thinking about womanhood and celebrating that. I wanted to use ingredients that strong women work on. So there’s Shea butter in there that comes from a women’s initiative in Ghana where it’s all women who make the Shea butter.

Lush Labs is no average app. On it, customers can use the Lush Lens feature to scan naked products in-store. All the information you need, including a demo and ingredients, will appear right in your hands. The app comes in a variety of languages including Chinese, Korean, and Japanese.

“Basically, all it does is use image recognition and then it’ll give you information around the product so you can get a bit of a demo,” Jack explained. “This means we’re reducing the amount of water we can use in the shops so we can actually cut back a bit. It also gives people an idea and obviously they can smell it themselves, see it themselves, then there’s all the ingredients and information listed on the app.”

10. How To Rid Your Tub Of Glitter

“Any little thing that saves from doing something else, or saves energy of any kind has to be good but don’t be hard on yourself,” Ro continued. “If it’s too hard, it’s like suddenly going vegan.

“Become a vegetarian first then try being a vegan if you want but don’t just go from being a meat-eater for every meal to nothing because you’ll get really hungry and you won’t know what to do and then you’ll get stubborn and think ‘Blow that, I’m not going to do it anymore.’