Before today’s game between the Golden State Warriors and the Oklahoma City Thunder, there may have been murmurings Warriors’ point guard Steph Curry is actually human, and his unrivaled ability to deliver clutch plays will eventually falter.

Then, with scores tied in overtime, this happened.

We are running out of ways to describe the greatness of Stephen Curry.

Outside of, well, being one of the most beautiful winning shots ever sunk on the court, the monstrous three-pointer pushed Curry further into the record books for most threes scored in a regular season. Of course, the dude he beat to that number was Steph Curry, circa last season.

Yeah, that physics-defying bucket means he’s currently at 288 3-pointers for the season. And there are fkn TWENTY FOUR games remaining. Put on a graph, his progress compared against other legendary players’ seasons looks like this: 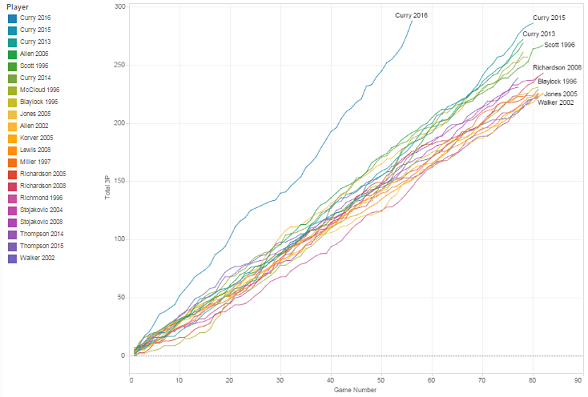 Oh, AND he also tied the NBA record for most threes in a single game – 12, by the way – because why the hell not at this point.

Unreal. These men have families, Stephen.