Farts. They’re a consequence of having working bowels, and they’re also very funny.

A Swedish footballer was sent off for “unsportsmanlike behaviour” for farting during a match, with the referee also accusing him of “deliberate provocation”.

Adam Lindin Ljungkvist, a left-back for Pershagen SK, was sent off during a recent match against Järna SK’s reserve team for doing the farts.

“I needed to fart, I had a bad stomach, so I just let go,” he told Swedish newspaper Länstidningen Södertälje. “Then I received two yellow cards and then a red. Yes, I was shocked, it’s the strangest thing I have ever experienced in football.

“Getting this second yellow for that fart, I cannot believe it. And people who were there say it’s the craziest thing they’ve ever seen.

“I asked the referee, ‘What, am I not allowed to break wind a little?’ ‘No,’ he replied … I don’t get it, but maybe he thought I farted in my hand and threw the fart at him. But I did not.”

Referee Dany Kako certainly believes it was an intentional fart.

“I perceived it as a provocation against another player,” he said. “He did it on purpose and it was inappropriate behaviour. Therefore, he received a yellow card.” 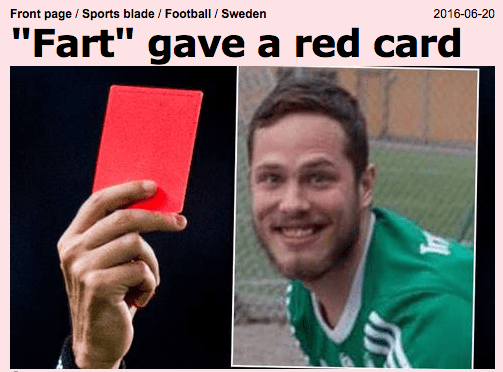 Ljungkvist told Swedish paper Aftonbladet that he thought the judgement was “crappy”, and we swear we are not making this up.

“I think it was a crappy judgement. Now I just laugh about it. There is no one else who has heard of this before, I’ve never heard of anyone who has been sent off for farting.

“He [the referee] said something about me being a spray-maker. There was no such thing. I said he was a buffoon.”

Opposition striker Kristopher Linde said it was the strangest thing he’d ever seen.

“I was standing a good distance away but I heard the fart loud and clear,” he said. “It’s the strangest thing I’ve seen on a pitch, and I’ve been playing football since I was eight years old.”

As a final word, Ljungkvist thought the whole thing was utterly unjust.

“I added just a fart and I got the red card,” he said, which PEDESTRIAN.TV‘s resident Swede told us means Ljungkvist thought the whole thing was out of order for just a “cracker” of a fart. Like the sound lightning makes. Crack.