Female Representation In Sport Is On The Up, But The Online Community Is Still Dominated By Men

“Gronk in again,” my sister texted the family group chat after Monday’s Super Bowl LV, as Rob Gronkowski went in for his second touchdown of the game, off the back of another precise Tom Brady pass.

I was over the moon – not because I’m a Tampa Bay Buccaneers fan, but because my dad, my sister and I have been Gronk and Brady fans since we saw them play for the New England Patriots on a sub-zero New York day in December of 2015.

Even if you’ve never watched a second of NFL in your life, you’ve most likely heard their names and whispers of the Tom Brady fairy tale of this latest season. 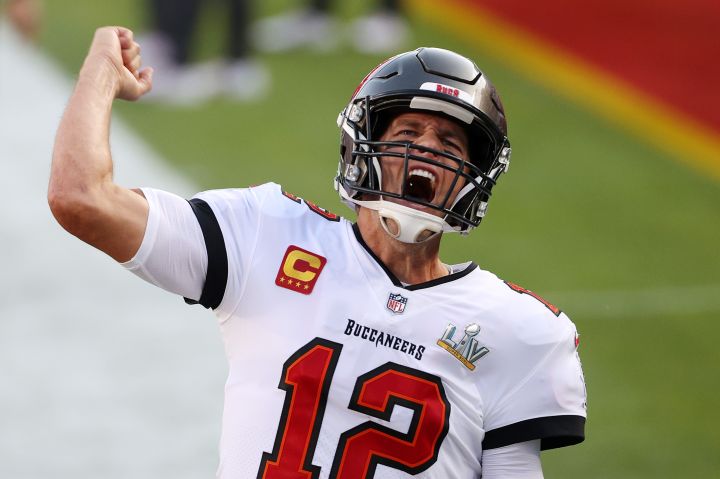 So, like many on my social media, for a moment, I felt compelled to share one of the clips from the play on my Instagram story with a bunch of celebratory goat emojis. But I didn’t.

I hesitated for the same reason I often hesitate from posting or writing about sport, because from my experience, both online and in real life, when a woman tries to engage in these conversations, she’s often painted as a kind of ‘cool girl’; someone who pretends to like what men like in order to attract attention.

Sport is truly one of the greatest loves of my life. Few things give me more joy than the roar of a crowd in a stadium, the emotions of an athlete in a moment they’ve worked their whole life for, watching human bodies stretch and bound and race, achieving unbelievable feats I could never imagine doing myself, and most of all, dissecting every second of it with other people.

Most of this dissection is limited to the confines of a few group chats though, and it’s become apparent to me, that as much as we wear the title of a ‘Sporting Nation’ with pride, the online space in Australia is yet to find a place for women and other people who aren’t straight, cisgendered men to safely engage in conversations about sport.

And I’m not talking about conversations around women’s sport. I don’t even believe that distinction is necessary. I’m talking about sport in general and all that falls underneath it, both on and off the field, and how it impacts our society.

Let’s use the NRL as an example – this is the sport I was raised on and is the home of the kind of stories I care about and want to engage in most.

In the last couple of years the average couch commentator has lost some faith in traditional sports media outlets for their perceived unfair treatment of players and sensationalised stories they perpetuate for clickbait.

In response, there has been an impressive rise in fan or former player-led brands like Bloke in a Bar and YKTR Sports, which have amassed huge followings on social media.

We buy into these communities because their content feels pure and honest. It puts the things we love about sport at the front without the drama or the clickbait and brings the athletes we admire closer to us, humanising them and giving them a voice.

A post shared by Bloke In A Bar (@blokeinabar)

But while Denan Kemp’s perspective is like gospel to me and a lot of my girlfriends, none of us would feel comfortable jumping in on the comments of his latest post, not necessarily in fear of being reprimanded by some @southssydneytillidie1995 guy, but also because there’s a blaring gap in the conversation.

While we’ve seen a great rise in recent years around the representation of women as athletes, journalists and even those in executive roles across the sporting world, the commentary around our inclusion and the weight of our perspectives, remains to not be taken as seriously as it should be, nor has there been enough space to counter some of the dangerous patriarchal attitudes that remain to rule.

When news breaks about Israel Folau potentially coming back to play in the NRL after being dropped from Australian Rugby for promoting homophobic hate speech, or another sexual assault allegation emerges in an off-season, there’s still far too much discussion around the player’s athleticism and not the issue at its core.

Said issues are always waved away with a simple ‘keep politics out of sport.’

What is missing – dare I say this ‘f’ word – is a feminist lens.

We live in an era where athletes are celebrities and how they act and what they promote has influence on what we buy, believe in, and even how we act.

Bottom line, I need a feminist space to talk about my love for and grievances with sport and sporting culture, to discuss solutions to the big problems as well as the fluffy stuff.

I need a space where I can pose the question why so many young women I know uphold ‘WAG’ status as an ultimate achievement, and the social implications of that fact, alongside arguments around who should be named in this year’s Origin squads.

After all of this, I’m probably setting myself up to be the person who creates such a platform.

That considering, I guess the only remaining question is, would you join me?

Marlee Silva is a Gamilaroi and Dunghutti storyteller and the Co-Founder of ‘Tiddas 4 Tiddas’. You can catch her on Instagram at @marlee.silva.