Manly Take It Any Way They Can

North Qld Cowboys will hop on their flight back to Townsville today with the sickening feeling that they were robbed while viewers are left to rue the hours of ammunition the contentious calls have provided for Phil Gould. It’s not like you need to be a rugby league Aristotle to predict that human error could one day bear influence over the game but that won’t stop the “I told you so’s” for the rest of the season. “But what if decided the grand final?” I hear you ask Gus. Well going on last nights performance, Manly Sea Eagles played like the team deserving of a crack at the penultimate game.

With Jamie Lyon dispelling any doubts about his fitness, Manly dominated the opening exchanges and were 12 points up after twenty minutes. It’s not like the Cowboys weren’t matching up with a massive hit from Gavin Cooper on Daly Cherry Evans proving they’d turned up to play, but unlike the previous week against the Bulldogs, the Sea Eagles remained composed under pressure. As did the Cowboys who fought their way back into the contest with a tries either side of half time to James Tamou and Antonio Winterstein but it’s from that point that Manly justified their pre-finals favourites tag. Forget the questionable nature of the tries, Jorge Taufua’s was legit while Michael Oldfield’s was, well ok you might have a point JT, but all the controversies do not take away from the fact that Manly were clearly the better team in the second half. The Cowboys are only one missed tackle or flick pass away from points with Jonathon Thurston and Matt Bowan around but they rarely posing any danger in the second half thanks to Manly’s clinical defence.

The Cowboy’s shouldn’t hang there heads. They needed to win the battle of the forwards and James Tamou, Matt Scott, Dallas Johnson, and Gavin Cooper were fantastic and JT never gave up but Manly wer just too good. Next week they head to Melbourne for a old style grudge match against the Storm. It’s a game I don’t think the Cowboy’s could have won where Manly dislayed the second half toughness and fight that had been lacking from their game. Next week will go down to the wire.

And for you Cowboys fans… 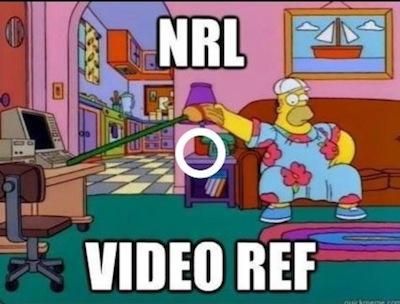