Footy fans: it’s time. Not for the AFL men’s season to kick off (that’s not til next Thursday March 18 when Carlton and Richmond clash at the MCG, in case you were wondering) but for Amazon Prime Video’s much-hyped AFL docu-series Making Their Mark to land on the streaming service.

As a footy fan, specifically a GWS Giants tragic, I am very excited to see the whole series. Having had a sneak peek at episode one, I can already tell you that the coaches swear. A LOT. It’s amazing, because at press conferences they are so polite and media trained and when they’re in the sheds they just go bang. Incredible stuff.

READ MORE
Remember The Time Joe Biden Went To The AFL In 2016 And Had No Fkn Idea What Was Going On? 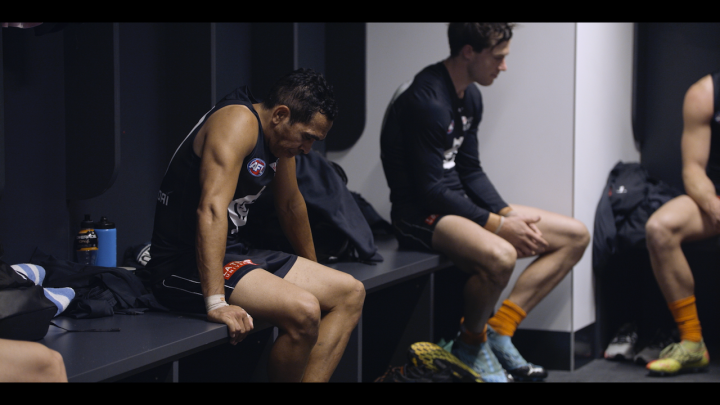 Eddie Betts, who returned to play for Carlton in 2020, in the series.

You can just imagine the producers quietly frothing when the 2020 season descended into absolute chaos thanks to the COVID-19 pandemic. It went from just a normal season of footy to teams living in different hubs for months, major rule changes and a grand final held for the first time ever away from the MCG. Madness! But the makings of a great telly show, no?

For GWS Giants captain Stephen Coniglio, it perhaps wasn’t the most ideal season to have immortalised on film. Having sat out a good part of the Giants’ surging 2019 season (in which they made their first grand final) with injury, he headed into 2020 with all the enthusiasm of being a first-time captain… and it didn’t pan out so well. The Giants failed to make the finals for the first time since 2016, and Cogs’ form was patchy. Patchy enough that he became the first captain to be dropped from an AFL team in 22 years. 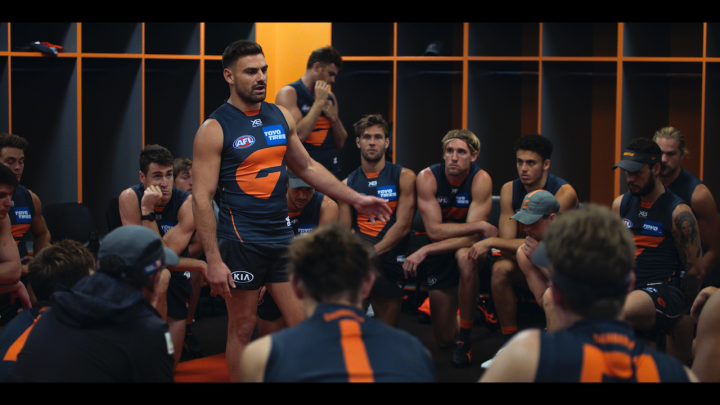 “There’s definitely mixed emotions watching this show… unless you play for Richmond,” Cogs told PEDESTRIAN.TV with a laugh. “[At the Giants] we joked that we wish it had been filmed in a season where we’d done a bit better. But that’s life, I guess.”

Stephen tells us that Amazon approached the club in late 2019 about appearing on Making Their Mark, and he was excited to take part because he wanted to share with footy fans what goes on behind-the-scenes at the club that he was a founding player at. “I love this footy club and what we have been able to achieve here,” he says of the Giants. “To me, it’s amazing that it’s now been documented to everyone to see.”

He says the Making Their Mark cameras followed him for around 4 days out of every week, and it soon became weirdly normal to have a bunch of blokes hanging around in the background. “Credit to the crew, after a while I didn’t even notice that they were even there,” he laughs. Even the fact that cameras were rolling when he found out that he’d been dropped from the team didn’t faze him, as he points out: “The cameras were the last thing on my mind at that point.” 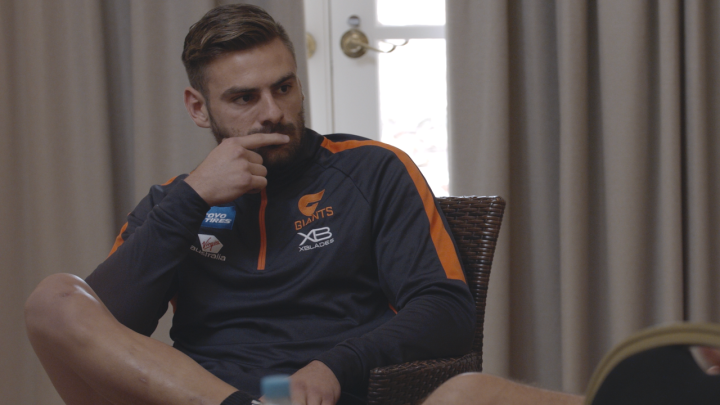 Cogs was controversially dropped from the team ahead of GWS’ Round 17 clash with Melbourne.

As for the show, he hasn’t watched it all because he says it can be “cringe” even hearing yourself talk, let alone watch yourself on camera. “There’s a lot of raw emotion in the series, and watching the bits that I’ve seen I’m like ‘did I actually say that?!'” Cogs is confident his mum won’t be mad about anything he said or did though. “I did worry about that, but so far it’s passed the mum and girlfriend test,” he laughs.

As for a potential season two of Making Their Mark following a different slew of personalities, Stephen nominates his newly-announced vice captain, firecracker forward Toby Greene to be the star. “He’s more entertaining than me. It would be good TV!”