The thing that made me happiest this week, month, season, year, was this:

He mate, I’m going to need to borrow these back off you pic.twitter.com/gVuFeypgdm

It came through a bit after 9:20pm last night whilst I was at the pub. The involuntary noise I let out upon seeing it disturbed several nearby patrons.

Jobe Watson, my current favourite player, returning to the Essendon Football Club, a team I love more than most of my family, represents the last big piece of the Essendon Doping Saga puzzle falling back into place. It’s been 1,326 days since the club self-reported its disastrous supplements regime to the AFL and ASADA on February 5th, 2013, and having Jobe confirm he will be suiting up for season 2017 has put a song in the hearts of staunch Essendon supporters. At long last, we can get back to enjoying football without having to carry that proverbial monkey on our backs.

And then today, as happy as I already was, this made me slightly happier: 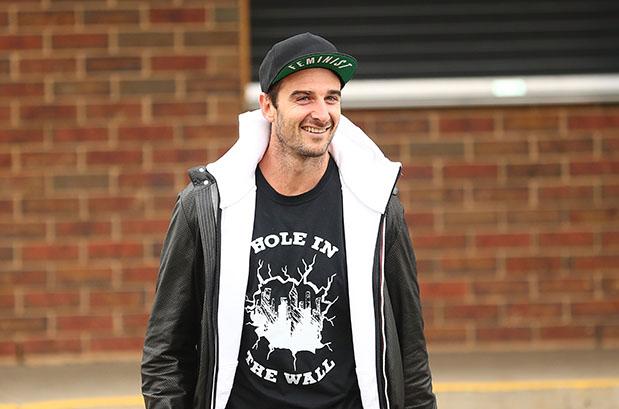 A simple snapback hat, emblazoned with the word “feminist“. Nothing more, nothing less.

Taken at face value, without knowledge of the man, the club, or what he’s gone through to get here, it has the potential to come off as a glad-handing white man seeking kudos for what should by all rights be basic human decency; co-opting women’s push for equality in a self-congratulatory show of “progressiveness.”

The reality, however, is far more complex, and makes Jobe’s choice to wear it at his press conference earlier this morning not insignificant.

On January 12th of this year, the Court of Arbitration for Sport overturned a previous decision made by the AFL Anti-Doping Tribunal, finding 34 past and present Essendon players, including Jobe, guilty of being (unwittingly) injected with the banned peptide Thymosin beta-4 during the rogue supplements regime conducted during the 2011 season by Stephen Dank, a shady character and a profound dickhead who single-handedly destroyed 4 seasons of Essendon football for me, and scores of other supporters.

The punishment handed down was severe: 2 years’ suspension. Thanks to backdating and time already served provisionally and voluntarily suspended, it meant that Watson, and 11 other players who remained at the club (coupled with 5 others still in the AFL system at other clubs) were rubbed out for the entire season; as if 17 men suddenly went down with ACL injuries simultaneously.

With nothing but time on their hands (and the bulk of their pay thanks to deals struck between the AFL, Essendon, and ASADA) some of the suspended men travelled; for elite career footballers, the extended time to travel is a luxury not afforded to them whilst in their 20s.

Jobe, however, took a different path. He went to New York, and got a job.

A noted coffee lover, Jobe temporarily relocated to NYC and begun a trial-by-fire as a barista at Hole In The Wall Coffee; a small but notable coffeehouse run by expat Aussies in the Manhattan neighbourhood of Murray Hill.

While there, a stay that lasted somewhere in the vicinity of 4 months, Jobe shared a house with a woman named Jackie Funder, the girlfriend of Jobe’s former teammate and Melbourne housemate Scott Gumbleton. Among other things experienced in New York (almond milk, as it turns out, is a nightmare to work with) it was gender equality and feminism that Jobe learned more about.

The Herald Sun earlier today reported that it was Jackie who fast-tracked Jobe’s sexual politics education, relaying to him the experience of a woman not only in the workplace, but in general as well.

“She educated me on what it was like to be a female in the workplace and on gender equality.”

The hat he wore this morning was a gift from Jackie, worn as a promise to her to do so in the chance that he announced his return to football via a press conference.

“She was educating me on gender equality and she bought that hat for me and I told her I would wear it if I was ever going to do a media conference here.”

So the hat. Is it significant? Kinda.

It’s a little (only a little) bit significant when you consider the alternative: Jobe doesn’t wear the hat, and the declaration that comes with it, and the AFL’s precarious status quo is maintained.

Outside of the bubble, it means very little. But in a world dominated by old boys mentalities and continually plagued by a culture of toxic masculinity and privileged entitlement, spurred on by placing young men on high, infallible pedestals in their prime years of adult development, it means something. And something is better than nothing.

Jobe, having listened to housemate Jackie’s experiences, and the experiences of other women, has today publicly performed the precise and right function of men engaging with feminist ideology: that of the listener, and the supporter. And if Jobe himself feels comfortable wearing the hat in such a visible public setting, having gone through the educational awakening that he apparently has, then absolutely more power to him.

But beyond that, it also represents an extremely prominent AFL player, inarguably one of the stars of the competition, openly supporting the cause of women in a critical period in the AFL’s history; one where they’re desperately attempting to atone for their multitude of past sins, and pushing towards the launch of the inaugural AFL Women’s season early next year.

In a sport so utterly dominated by blokey blokes, where even the thought of one female joining the panel of a weekly TV show was enough to send the country into a fit, that’s not nothing.

But ultimately, it’s just a hat. A simple snapback. Nothing more, nothing less. It’s nice that he wore it, and it’s nice to learn that my favourite football player believes in sexual politics that are closely aligned to my own. But by that same token, getting up in arms about it one way or the other isn’t necessary. It means something, but it doesn’t mean everything.

I love Jobe Watson quite dearly. After the hat thing? I love him just a little bit more.

That’s the thing that makes me happiest of all.