Ordinarily when we post absurd injury stories here it’s for the purposes of both revelling in someone absolutely wrecking themselves and being glad that it wasn’t any of us. This time, however, I’m offering up something slightly different: The story of how I, Cam Tyeson – humble battler of the internet, Prince of Tasmania, and otherwise sane and normal 33-year-old person – managed to obliterate my own rib cage in front of 45,000 people at a football stadium in Melbourne.

Just so we’re clear here: There is video of it happening. You will be able to see me eat absolute shit in this story. I’m in incredible pain as I write this. I am ashamed of no part of it.

Firstly, some background: I wholeheartedly love the Essendon Football Club. They give me great anxiety and drive me insane on a weekly basis. But I love them nonetheless. They are family to me. I adore every awful inch of that club. I hate them so much, they are all my beautiful perfect sons. And so on and so on forever.

Of all the things the club does right – colour scheme, Indigenous development, solid LGBTQI support, off-season recruiting (all of a sudden???) – one of the things they can’t quite seem to figure out is fan engagement.

For a myriad of reasons they miss the mark on this: Maybe it’s just not something they’ve thought of doing in the past. Maybe it’s not a primary focus for the club. Maybe with a fan base in the hundreds of thousands you can’t really afford to get chummy with a handful of borderline psychopaths who lurk social media.

Whatever the case, just on two weeks ago Essendon was approaching its round two clash with St Kilda; the Bombers’ first home game of the new AFL season. With it, came the opportunity to use one of the quarter breaks to do something fun. Y’know, shoot some t-shirts into the crowd, get punters to dance in the stands, have some pissed berk roost a torp into the mascot’s bonce, that kind of thing.

Essendon went with this.

Thanks to our co-major partner Fujitsu, you could have the chance to race against the Fujitsu Flame Runner at #AFLDonsSaints for $500!

A footrace between an ordinary fool and an actual athlete in a morph suit called the “Fujitsu Flame,” who will give up a small head-start and then mercilessly mow down whichever dumb idiot is foolish enough to let themselves get absolutely fucken rinsed in front of a capacity Marvel Stadium crowd who will no doubt hoot and holler as the whole thing unfolds.

Obviously, I signed up.

READ MORE
And Next In Horror Injuries, Here’s A Vid Of A Gnarly Elbow Dislocation At The AFL

The competition mechanic demanded people respond, in 25 words or less, why they should be the one to get completely pantsed by the Fujitsu Flame while 45,000 people watch on.

This is what I wrote. 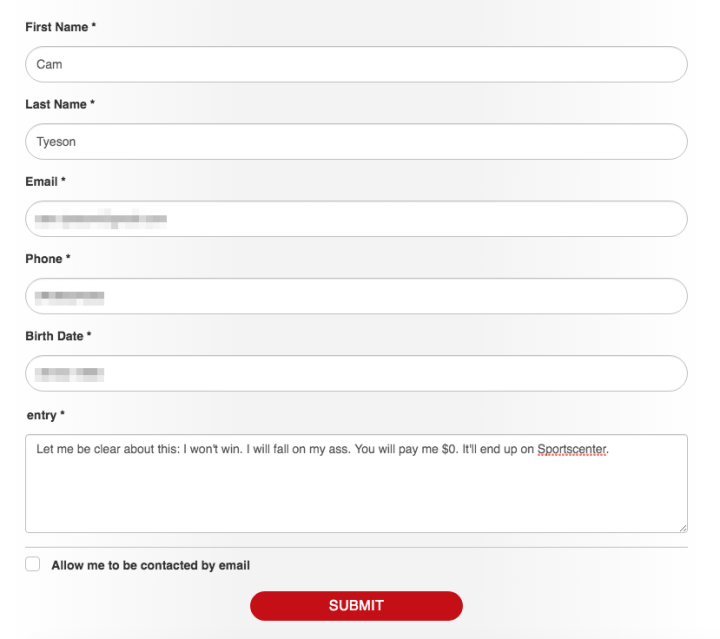 That’s 25 words on the nose, folks. I’m may not be a rule breaker, but I’m a rule push-it-to-the-limits-er. A real Rebel With At Least One Cause.

Within minutes Essendon officials called my bluff. “You’re it,” they said. “You’re the man,” they insisted. “You’re the one who will run 180 metres on the surface of Marvel Stadium at three-quarter time of the game on Saturday evening.“

Huge fan of this so far.

At 33-years-old and a few too many pies past a three-digit weight figure, I am not exactly a picture of physical fitness. The last time I ran anywhere near 180 metres the Howard Government was still in power. The only thing I’d run through recently was a fridge full of frothies. I had about as much chance of winning the race as the Suns do of winning the flag. These were all jokes I mentally scribbled down to say on the big screen and promptly forgot when I got there because, as it turns out, 45,000 people is fucking heaps.

So at three-quarter time, in front of a packed Marvel Stadium, several mid-strength beers deep, and with a tawdry $500 on the line should I win, club officials trotted me out onto the field and propped me up on the boundary, ready to run.

Panic set in. I very much had not thought this through. What the hell do I do? Do I take it easy? Do I keep it in second gear and play to the crowd? Do I accept my clearly inevitable defeat and take the easy consolation merch pack?

I bloody went for it.

How’s the form. The stride. The determination. Get the FUCK around me.

While clearly the highlight of the whole shebang is the moment I apparently thought I had it in the bag, deciding to give the crowd a full-barrelled mid-race rev up…

…the real kicker comes right at the end where, while pushing for the finish line, I eat – and let me be very clear about this – immeasurable shit.

What everyone failed to tell me prior to turning myself into a human lawn dart, is that the astroturf outer track on Marvel Stadium is extremely hard. It’s essentially pure concrete that they’ve spray-painted with that fake snow shit bogan Mums put on their windows at Christmas time and then not cleaned off until May when it’s gone a real mouldy-shade of green.

And as far as my ribs were concerned, it was the bloody Berserker.

After a week and a half of bursting into tears every time I coughed, I finally went to the Doctor who ordered a full-on bone scan. Lo and behold: Five fractured ribs. All in a row. Lit up like NYE Fireworks.

My GP was genuinely shocked I didn’t hurt myself any worse. I’m a medical miracle.

I walked away from the stadium that night with the booby prize merch pack: A beanie, a scarf, and a footy. But after learning that I murdered my rib cage dead in the process of electrifying a packed Marvel Stadium crowd, I think I deserve more.

So I end this article by appealing to Chris Hemsworth, who I’m lead to believe is the boss of Marvel and lives somewhere inside the stadium, to give me the $500 I would’ve received had I won the race.

I’m on the mend now, thankfully. Last night I almost slept on my side for five minutes and it kicked ass. I’m still petrified of sneezing, but one thing at a time.

But the moral of this whole story – what I want you all to take away from this – is real simple:

Never be afraid to make yourself look like an ass in the name of a good yarn.

Also Chris Hemsworth needs to give me $500.