GOING BOONTA WITH BADGE: We Hit Up The Rio Olympics With Nick Cummins

The Rio Olympics are coming to a close, and we can’t help but say that they were a pretty crackin’ time. Sure, there were a couple of hiccups along the way – a casual robbery or two, the frankly stunning saga of Ryan Lochte, the world’s greenest diving pool – but the infectious joy of the Brazilians and some mostly stunning weather are enough to cut through.

PEDESTRIAN.TV got over to Rio with the fine folk at Oakley – who have been providing the high performance sports eyewear for the bulk of athletes competing outdoors, if you’ve been paying attention. Here’s Brazilian beach volleyball dominator Bruno Schmidt rocking Green Fade sunnies with PRIZM tech for max contrast while he’s destroying the court. He joined over 700 other Oakley athletes rocking Green Fade at the Olympics this year. 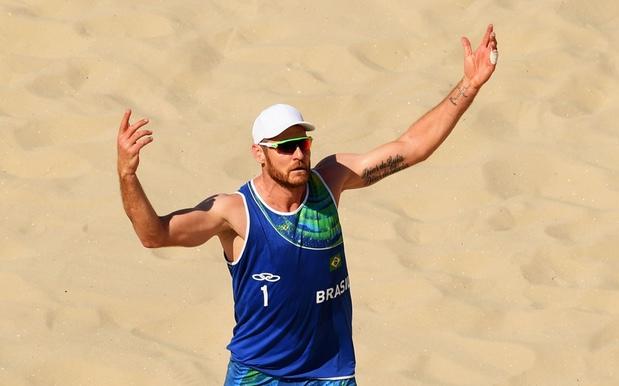 you talkin to me?

We dunno whether it was that or his powerful muscles that scored him the gold, but it was quite possibly a joint effort.

But it wasn’t just Oakley we hit Rio with: we were also there with confirmed legend Nick “Honey Badger” Cummins. The Badge wasn’t playing rugby sevens because of a knee injury, but that didn’t stop him from showing up in Rio anyway, keen to catch some of the atmosphere and soak up some of the glory (Seriously, he couldn’t go anywhere without being stopped and asked for a yarn about a one-armed bricklayer). I’ve never seen anyone that lightning fast when it comes to slapping mosquitos, either (or “bloody Zikas“, as he called ’em).

We got him on Facebook Live mere moments after he stirred from a nap, and it went exactly how you’d expect a chat with the Badge would go:

Here’s the lowdown on Rio – and why you might make it your next destination, even when the Olympics are doneski. 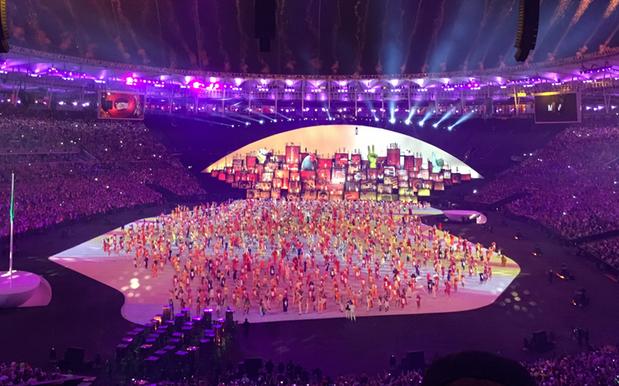 You mighta caught the Olympics opening ceremony on the telly, but the atmosphere there was pretty electric and (most importantly) the beers were damn cheap, which is always a bonus.

Maracanã Stadium is a pretty iconic venue, and though Brazil’s show lacked the sheer technological wizardry of, say, Beijing, they made up for it with pure energy. The place was packed out, and the crowd were on their feet for most of it. 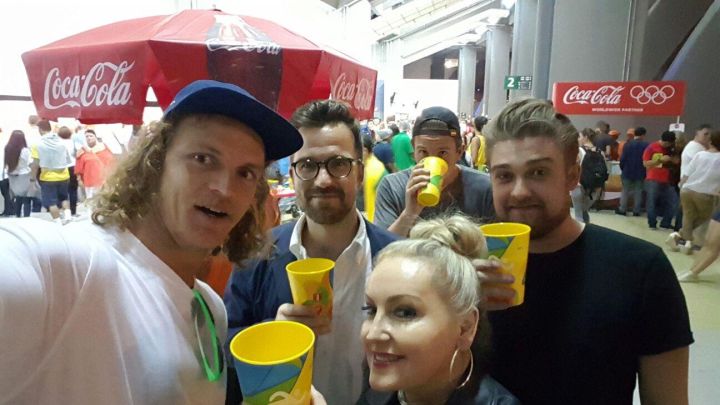 There were a few solid highlights: the representation of Brazil’s colonisation, featuring dancers forming themselves into ships, was pretty spellbinding. As many have pointed out, the performance didn’t shy away from unsavoury parts of Brazil’s history – like slavery – indicating how these things came to create the country as it is today.

They did run out of food pretty quickly though. Except popcorn. I have never seen lines that long for popcorn in my life and I daresay I never will again. 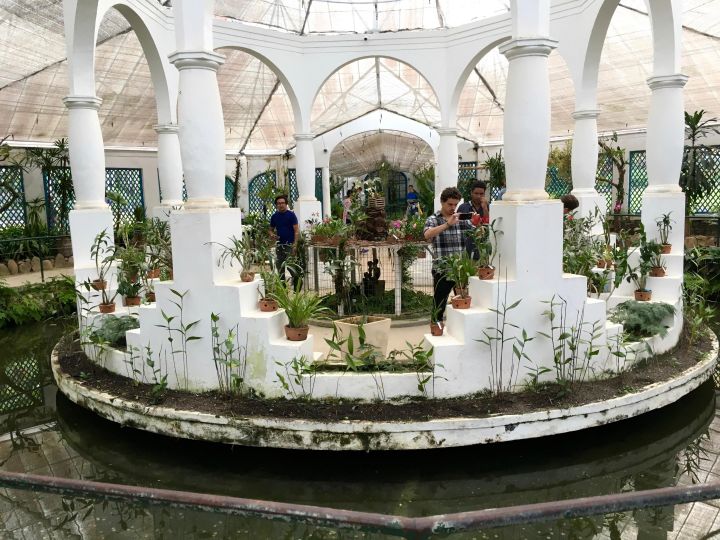 Look, it probably sounds like we’re clowning on you, but we’re being totally real here: the Botanic Gardens in Rio are byoodiful. If you ever find yourself in that part of the world, it’s a nice way to get yourself acquainted with the unique flora of Brazil – and not to mention a pretty chill place for a stroll.

It’s also got a great view of Christ the Redeemer (like everywhere else in the country) which is worth a peek. 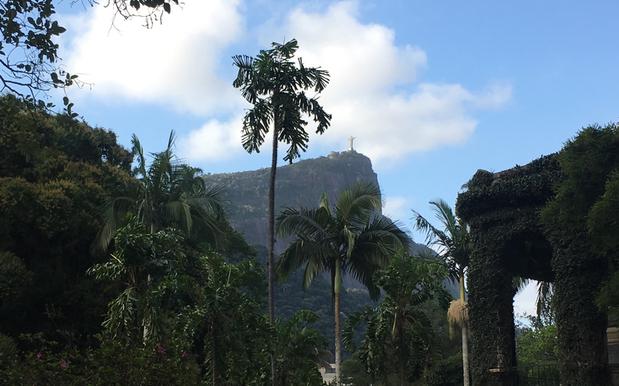 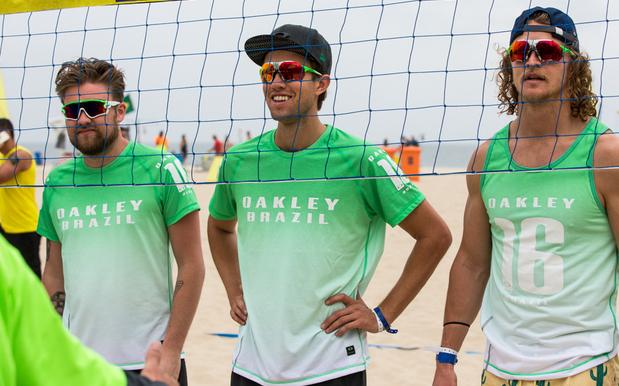 not the strongest volleyball crew in history tbh

It’s unsurprising that Brazil ended up landing the gold in beach volleyball – spend some time down at Copacabana and you’ll see a lot of nets down on the beach and a lot of locals making full use of them.

Not only did we get to see our Aussie girls beat Costa Rica at the beach volleyball stadium, we also got down to the beach to play a game, and the Honey Badger proved a pretty great asset.

We’re not going to say that rugby skills translate perfectly to volleyball, but there are some fundamentals there. 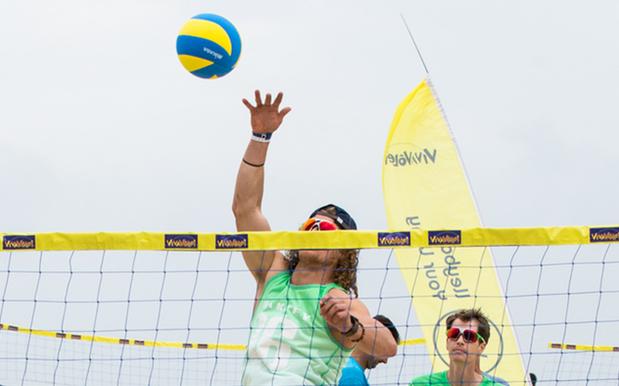 Honestly, I’m not a massive legend when it comes to beach volleyball. This became more obvious when not one, but four former volleyball pros joined the game – Mauricio Lima, Jackie Silva, Randy Stoklos  and Nikola Grbic. 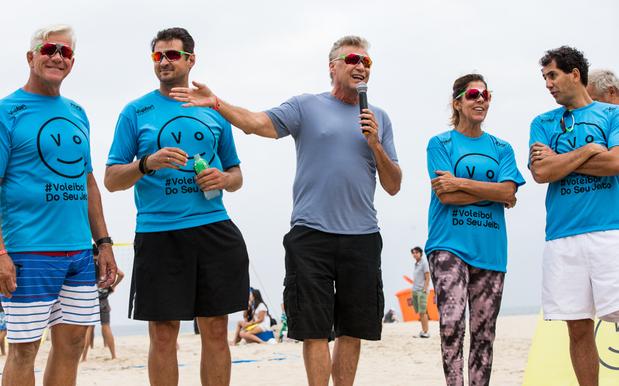 I think they were playing easy on us, but the spikes were still coming at supersonic speeds. This wasn’t your average fun beach game. It was, frankly, a matter of life and death. Get down to Copacabana and weasel your way into a volleyball game by all means – but ensure you aren’t playing against actual pros. In Brazil, this is a very real and very dangerous possibility.

We were also testing the Oakley PRIZM lenses to see how they went when you’re actually out performing. Over 700 Oakley athletes wore Green Fade glasses with PRIZM lenses – which is a pretty strong endorsement of the quality of the lenses.

The day got pretty overcast by the end of it, and there’s no sport accessory on the planet that will give me the necessary power to go toe-to-toe with the Badge, but they’re great sunnies, and it’s no wonder pro athletes go for ’em. The contrast is great, and they worked well even after the sun set and it started getting way darker.

GETTIN’ AMONGST IT AT A SAMBA CLUB 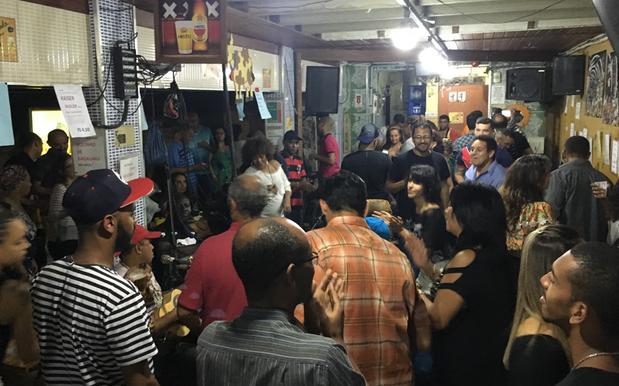 You haven’t been to Rio unless you get yourself down to a samba club. We hit one up in Lapa, Rio’s bohemian district. On the recommendation of some locals, we ignored the big touristy samba joints, and opted for something a little more hole-in-the-wall.

Even though the club was lit up like a bloody supermarket, the vibe was still on point. Shots flow freely, and there’s representation from literally every age group – including the old blokes, who without question dominate the dancefloor. They know the moves, and the young fellas know to get the hell outta the way. Myself included.

Can confirm that the Honey Badger dramatically undersells his hip-shaking ability. The things I’ve seen can never quite be erased from memory.

CHILLING AT THE OAKLEY SAFEHOUSE 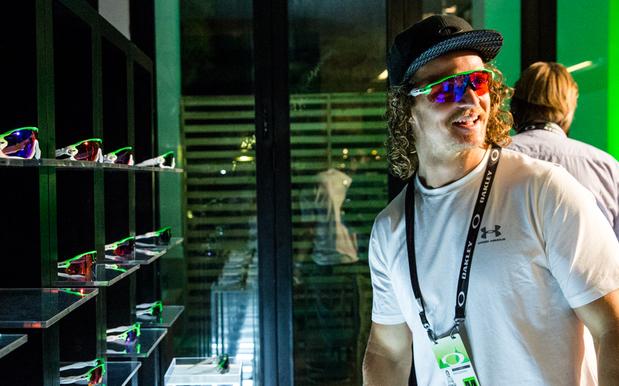 Every Olympic sponsor maintains a bloody sweet setup in the host city, where they can show off their product and give their athletes somewhere to kick back and chill out away from the pure madness in the city and around the venues. Oakley had a sick setup – a nice space at the Rio pony club with a massive outdoor area, big flatscreen TVs showing every concurrent event possible, and a pretty great view of Christ the Redeemer up on the mountain.

A whole bunch of Olympians were spotted playing it cool at the safehouse – including legendary cyclist Chris Froome and gun Kazakhstani tennis player Yaroslava Shvedova. Needless to say, it was a good vibe.

The food was intensely great – I guess it has to be when you’re feeding Olympians, after all. Despite the questionable inclusion of chicken hearts on the buffet menu, for the most part it was straight up the best meal I had in Rio. Considering the quality of the local cuisine, that’s a big compliment.

Also, there were ample caipirinhas going. If you’ve never had a caipirinha, it’s an intense Brazilian drink much loved by tourists which is essentially the liquid equivalent of getting smashed in the face with a shovel made of sugar. A couple of these will put you on your back, and they were well-supplied at the Oakley Safehouse. Cheers guys.

Here’s a peek. It doesn’t quite nail just how great the food was, for one, but it’s a pretty solid look nonetheless:

We got a demo from Oakley’s R&D department on the tech behind the PRIZM lenses the athletes were rocking during events, and how they’re specifically engineered for different sports and disciplines to block out certain wavelengths of light. For example, the blue-tinted Water lens is intended for – you guessed it – water sports like kayaking, keeping their vision crisp and strong even in bright blue reflected light. 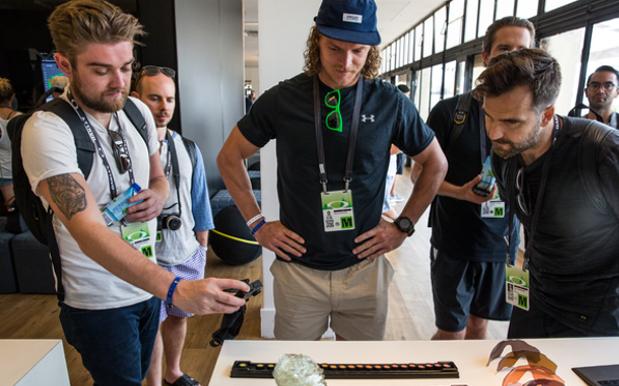 Basically, it was exactly the kind of pad you’d want to be at in-between Olympic events.

We had a cracking time in Rio. Sure – you’ve probably read about a bunch of stuff that didn’t go quite to plan. But the atmosphere was off chops, and it’ll be a hard one for Tokyo to top in that department.