As much as we wish this were a story about an exceedingly athletic infant (even though that would make a really good movie: baby with outrageous throwing arm gets recruited by a team down-on-its-luck, turning their fortunes around to ultimately defeat their biggest rival – call it ‘Tot, Tot, Hike‘ you are DEAD SET WELCOME, HOLLYWOOD) the truth is almost better.

The annual NFL Draft is currently happening in Philadelphia, and college football prospects are competing to see whose agent can scrounge up the most outrageous suit for them.

While the top end of the draft had its fair share of surprises – Deshaun Watson somehow being the third QB taken, Cleveland stockpiling future picks like they’re about to be featured on ‘Doomsday Preppers‘, Chicago selling the house in order to move up one place in the draft order for a loaf of supermarket white bread – the real winner of the draft didn’t come along until pick number 20.

Notable for being the latest an offensive tackle has been selected in the first round in NFL Draft history, the Denver Broncos sured up their o-line by selecting University of Utah hoss Garett Bolles; a 196cm, 135kg wrecking ball of a bloke who also somehow ran the second-fastest 40-yard dash at the NFL Combine, making him:

That’s all well and good, but then the big man took his impeccably dressed and very tiny son up onto the draft stage with him and suddenly who gives a shit about football anymore. 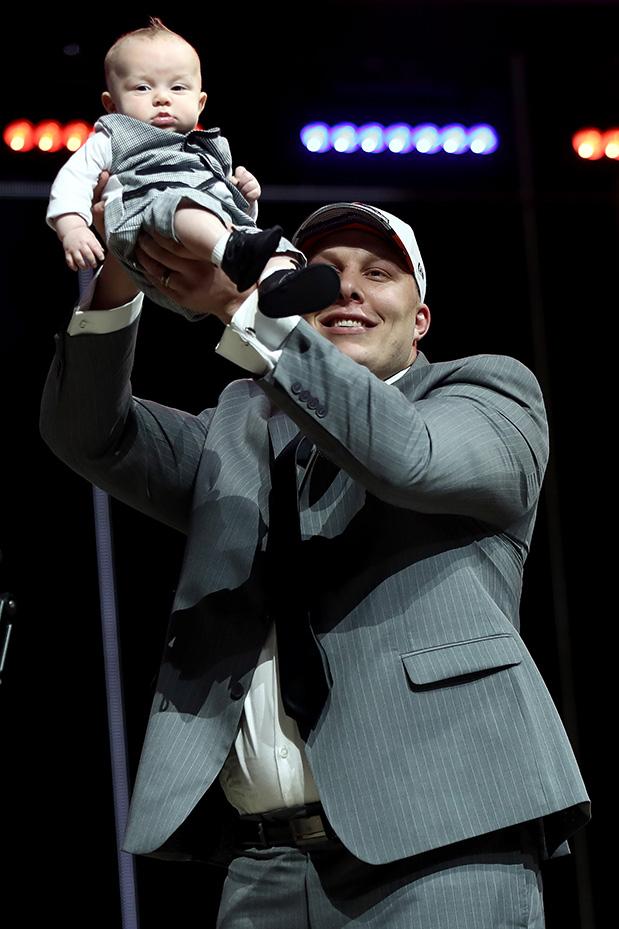 The ‘Lion King‘ similarities were not lost on the humble punters of the internet, who declared the wee recruit the winner of the draft in record time.

Garett Bolles holding his baby up like Simba is the highlight of the #NFLDraft pic.twitter.com/9Gg4cOeQhD

Though all this said, either the equipment manager is gonna have to seriously re-think shirt size, or the small baby is going to have to hit the weights room in a big way if he has any hope of fitting into his new jersey by the start of the season.