Everyone Is Fainting, Puking, Melting, Hallucinating Under “Inhumane” Conditions At The Australian Open

Despite temperatures on uncovered courts peaking at 42.2°C yesterday, officials at Melbourne Park are downplaying the severity of conditions on temporary loan from Hell and are yet to implement the tournament’s Extreme Heat Policy, invoking the ire of Australian Open competitors who are passing out, vomiting, and hallucinating; the soles of their shoes and water bottles literally melting under conditions being likened to a sauna, a frying pan or an oven in which to roast the perfect potato.

According to AP News, Canadian qualifier Frank Dancevic started to feel dizzy in the first set of his match against Benoit Paire, before collapsing in the next set and lying unconscious for a full minute, during which time he was visited by an apparition of Snoopy, an affable cartoon beagle: “I couldn’t keep my balance anymore and I leaned over the fence, and when I woke up people were all around me. I was dizzy from the middle of the first set and then I saw Snoopy and I thought, “Wow Snoopy, that’s weird.'”

“It’s inhumane… It’s hazardous to be out there,” he continued. “It’s dangerous. Until somebody dies, they’re just going to keep playing matches in this heat… It’s been an hour and a half after my match and I still can’t pee.”

Nimble-footed ball boys and girls are also being treated for heat stress, prompting organisers to generously shorten their hour-long shifts to 45-minute rotations on courts hot enough to melt Caroline Wozniacki’s water bottle: “I put the [water] bottle down on the court and it started melting a little bit underneath – the plastic… It felt like I was playing in a sauna.”

In related burns, thirteenth seed John Isner also likened playing conditions to “an oven – when I open the oven and the potatoes are done. That’s what it’s like”; Victoria Azarenka preferred the “like you’re dancing in a frying pan” analogy; Peng Shuai vomited, cramped up, and had to be helped off court; Jo Wilfred Tsonga’s shoes began to melt and Jelena Jankovic burned her tush on a bench.

Temperatures are not expected to drop below 40° until Saturday. “That’s obviously not great,” concluded Andy Murray. Until then, it’s going to be hot as balls. 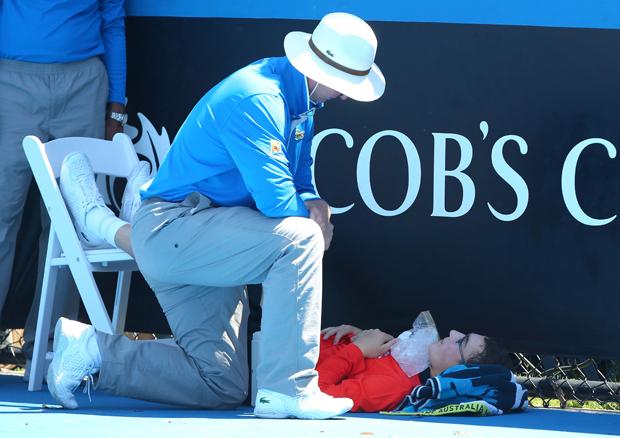 via The Guardian, Metro