Tonight was the AFLW’s annual W Awards and hooboy was it a stunner of a night. The Brownlows are quaking in their footy boots.

The W Awards shone a well-deserved spotlight on all of the fkn incredible AFLW teams as well as highlighting some of the sport’s best individual players.

It was a true neck and neck finish in the Best and Fairest comp. Bates won by one vote, narrowly beating the Adelaide Crows’ Anne Hatchard.

“I’m just in shock really. I never expected this,” Bates said when she accepted the award.

“This is just the greatest honour you could ever [receive].”

During her speech, she was asked about the spirit and ethos of the team. Bates said her Lions teammates were the first to come help out after her and her partner Emma Zielke‘s home was damaged in the Queensland floods.

“One of our key values at the Lions is sisterhood,” she explained.

“Sisterhood is definitely what it feels like at the Lions and I love these girls like sisters. That’s what feels like has driven our success, that love for each other and care.”

Is anyone else tearing up? I am.

"Sisterhood is definitely what it feels like at the Lions and I love these girls like sisters. That's what feels like has driven our success, that love for each other and care." ❤️

We are smiling, crying and laughing to Emily Bates' speech 🥲#AFLWAwards | #AFLW pic.twitter.com/YrzCpbZsgo

She then convinced Brisbane Lions head coach Craig Starcevich to do a shoey of champagne during her thank you speech. AFLW’s impact, I am obsessed. 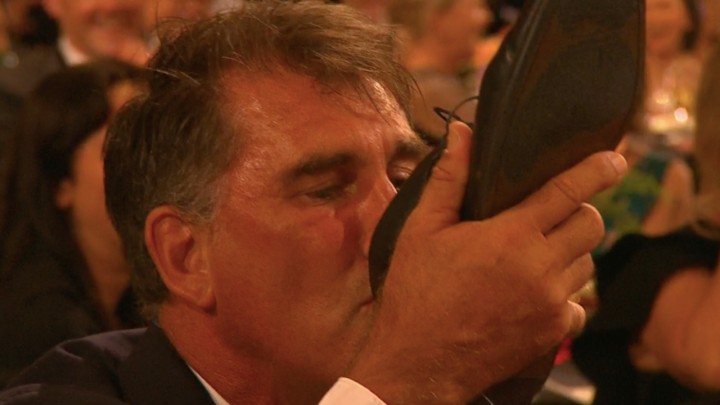 There were a slew of other awards handed out over the course of the evening.

She’s also now the second Carlton player to take home the title after Madison Prespakis won back in 2019.

Then Tahlia Randall won the Toyota AFLW Mark of the Year Award while Ebony Antonio won Accor AFLW Goal of the Year award. Bloody impressive if you ask me.

Both Randall and Antonio were awarded $5000 by Toyota and Accor respectively.

As well as the big prizes, the AFLW also released the deets of the All Australian team during the W Awards ceremony.

North Melbourne’s Emma Kearney made some impressive history. She’s been named as an All-Australian player six years in a row, meaning she’s made it onto the team every year since it started. Kearney’s also been appointed captain of the team.

Plus the #looks were fucking phenomenal.

I am obsessed with all of these fits.

All in all, a stellar evening celebrating some of Australia’s best sportspeople. And if the W Awards have sparked your interest in AFLW, lucky you! The Adelaide Crows are playing Melbourne at the Grand Final in Adelaide this Saturday, April 9.

It’s sure to be absolutely stunning stuff.