It’s absolutely no secret that Tom Liberatore is one of, if not the, biggest weapons currently kicking about the AFL. But you don’t get a full picture of just how differently he operates until you consider his extensive collection of wild tattoos. The latest of which will surely draw a knowing nod from even the most ardent fan of The Simpsons.

The Western Bulldogs gun apparently added to his folder of tough stickers over this current off-season, dragging out a deep-cut Simpsons reference from the absolute top shelf.

Herald Sun photographer Michael Klein spotted the A+ tatty pair at Bulldogs training yesterday, posting a photo of it to Instagram last night.

For what it’s worth, this isn’t the first Simpsons tattoo Liberatore’s committed skin to. 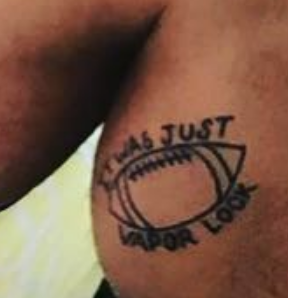 It was just vapor lock!!!

Kinda makes you think/hope that he’s got a game ball from the 2016 Grand Final sitting on his mantlepiece that he exclusively refers to as Stitchface.