Time and time again on Monday mornings we’re seeing the same story pop up: An AFL player calling out the abuse they cop on social media after playing games across the weekend. This time, both Richmond’s Dylan Grimes and Port Adelaide’s Zak Butters have outed the abusive trolls who sent reprehensible shit to their inboxes.

Following Richmond’s clash against Essendon on Saturday night, Grimes revealed a handful of the choice messages that bombarded his Instagram message requests folder. None of them all that kind.

In an Instagram story, Grimes prefaced the posts by stating “this is ridiculous, death threats and suicide suggestions? Come on.”

What followed was a string of messages from idiot fans who felt it within their rights to sling the wanton abuse because of what happened on a football field.

One read “Fucking dumb c*nt you and your whole team,” while another asserted “C*nt u are the biggest flop in the AFL. Grow a fucking set of nuts u soft cock.”

Teammate Nick Vlastuin also shared some of the choice words a fan had sent him after the game, in a message which referred to him as a “fucking fairy,” among other things.

Similarly, Port star Zak Butters shared the rather unpleasant words a fan sent him after the Power squeaked out a win against Hawthorn on Saturday. “Listen here you little c*nt, do you know what I lost on you, you fucking useless bastard?” the fan sent, in a message that also included some atrocious remarks directed at Butters’ parents. 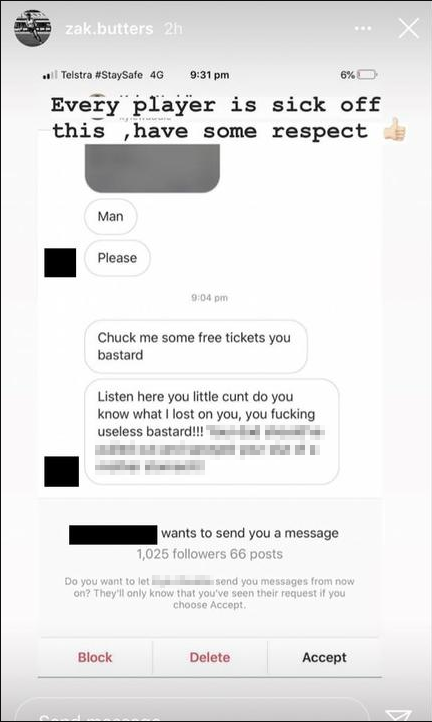 This all serves as just the tip of a very shitty iceberg in what’s been a torrid year for the game and its relationship with social media. Abuse of this variety is comparatively beige compared to some of the racial epithets that have been wantonly hurled at the AFL’s Indigenous stars this season. That’s included emerging Swans star Elijah Taylor copping horrific racial abuse just last week, and even the revered and beloved legend Eddie Betts having to suffer through similar remarks in June.

Thanks to the openness of social media, professional athletes have never been more accessible. For the most part, that’s a great thing. Players taking control of their own narrative and showcasing their personalities is a wonderful thing. Not only does that allow them to shine off-field in ways that aren’t controlled by the narratives footy media sets, but it allows fans to build even more respect and admiration, and gives them avenues to express that respect and gratitude directly.

But the horrible flip side is that it’s always the slowest leg that ruins it for everyone. And while academically unpacking it all has merit in the grander scheme of the important conversation this warrants, in the immediate aftermath it’s probably a better idea to address this stuff directly.

Because at the end of the day, for those handful of complete spuds who see it fit to ruin things for everyone, the solution is clear:

It’s not a footy player’s problem that your shitty multi didn’t come in. It’s your problem.

It’s not a footy player’s problem that your fantasy team didn’t get the W this weekend. It’s your problem.

It’s not a footy player’s problem if you think they’re a “flop.” It’s your problem.

And it’s certainly not a footy player’s problem if you can’t watch a game without behaving like a racist piece of shit. That is very much your problem.

Those are all your problems. Stop trying to make them theirs.