A UFC Fighter Brought His Dog To A Staredown & How Could You Punch Him Now?

Half the fun of combat sports is the pageantry and posturing that goes on in the promotion and lead-up. This is particularly true of the face-off: a wildly curious photo opportunity in which two jaw-jackin’ fighters see who can not touch each other the hardest with the kind of pregnant lingering usually reserved for sexy make-outs.

Except in the case of veteran British brawler Brad Pickett, who somehow turned the usually tense stare down into the cutest dang thing you’ll see in a sporting arena for quite some time.

Pickett, who holds a career MMA record of 25-13, is gearing up for his retirement fight at the upcoming ‘UFC Fight Night 107‘ in Pickett’s native London. At the event, the batamweight is set to face off against Ecuadorian fighter Marlon Vera.

And instead of going out with a bang, Pickett took a different route at their press-op stare-down: he brought his wee dog, Bonnie.

Yes, Brad Pickett does have a dog with him. #UFCLondon pic.twitter.com/qligChHYtS 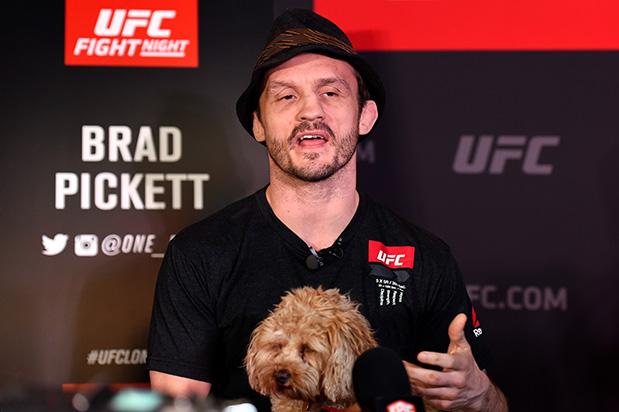 Nawwwwwww. Who’s a good little brawler? YOU ARE!

Pickett loves wee little Bonnie quite a bit, as it turns out, and his Instagram page is a testament to that. Cop this for an overdose of cute from Bonnie and Pickett’s young son, Buddy.

If all this combined weren’t cute enough for you, it somehow gets better.

Marlon Vera took the retirement bout against Pickett on very short notice; Pickett was originally supposed to face Mexican Henry Briones, but for the third time Briones pulled out of the scheduled brawl against Pickett, leaving officials scrambling to find an opponent for Pickett’s hometown swansong.

When Vera signed on to take the fight, Pickett sent him a gift as a thank you. Sure, it’s only a mug with the logo of Pickett’s podcast on it. But who in their right mind extends a thoughtful gesture to the man you’re about to punch the face of?

Brad Pickett is either the nicest human being to ever grace a UFC octagon, or he’s operating with some next-level mind games shit because how on earth could you ever seriously want to punch him in the bonce after that?

Frankly, it’s arguably a little of both.

‘UFC Fight Night 107‘ goes down tomorrow. As of Sunday, Brad can hang out with Bonnie as much as he wants.