Cop An Eyeful Of The Best (Or Blurst) Kiss Cam Footage

Medibank is helping spread the lurve this Mardi Gras by celebrating the power of smooches with the return of their Kiss Cam. For more goss on how life's #BetterwithaKiss, head HERE.

While some may call into question the integrity of Kiss Cam footage – spoil sports think it’s as fake as wrestling – there is no denying that a good PDA framed by a graphic love heart can warm the cockles of even the most gnarled romance-Grinch.

There are (mostly) bad ones, good ones, so-bad-they’re-good ones, uncomfortable ones, and even cold, biting rejection ones, but what we’re interested in today are the ones to give us the most lolz, the best and the blurst of ’em.

Let us begin with Stephen Fry explaining the very concept of the Kiss Cam at the 2016 BAFTAs, and then using the power of two conjoined graphic love hearts to compel some celebrity smoocheroonis. There’s Stanley Tucci and Cuba Gooding Jr., Dame Maggie Smith and Leonardo DiCaprio, Bryan Cranston and Julianne Moore (necking like teenagers), and finally Eddie Izzard and Rebel Wilson.

At the start of 2016, the National Hockey League boasted about its first queer Kiss Cam pash at an LA Kings/Toronto Maple Leafs game. Yep, Brad Kerr and Andy Evans made KC history with this big ol’ snog, wholly deserving of all the jubilant cheers from the crowd. And then they leveraged their moment in service of their fundraising efforts, raising money for the Leukemia and Lymphoma Society.

This is straight-up my favourite Kiss Cam of all time: footage recorded by a fan at Adele‘s Melbourne show last year. Not only does it capture a lot of lovely moments of shared romantic and platonic intimacy between both queer and straight Aussie couples of all ages – but it comes complete with the very sweet commentary of its videographer. She reckons every smooch is a blessing too.

Amidst all the very vanilla pecks at an Atlanta Hawks basketball game last year, one guy decided to up the stakes with a proposal – only to drop the ring. So the rest of the footage is just everyone nearby scrambling to find it.

Over to minor-league baseball back in 2013, where this footage from a Fresno Grizzlies game was seemingly taken with a camera that is not in fact the Kiss Cam, but one with the same effect on its duos in the spotlight. Dude refuses to get off the phone for a snog, so his girlfriend pours her soda cup in his face and high-tails it out of there. Power. Move.

At a Minnesota Gophers hockey game in 2014, as the infuriating voiceover guy encouraged a man and woman to “Kiss, kiss, kiss, kiss…” only for the man to unfurl a sheet of paper: “MY SISTER ->“.

Back to the Atlanta Hawks: last year, amidst another slew of quick pecks and polite chuckling, one guy decides nah, not into it – so his girlfriend lays one on the dude to her left instead. Her bae isn’t into that either.

Can we also please take a second for this very happy fella? 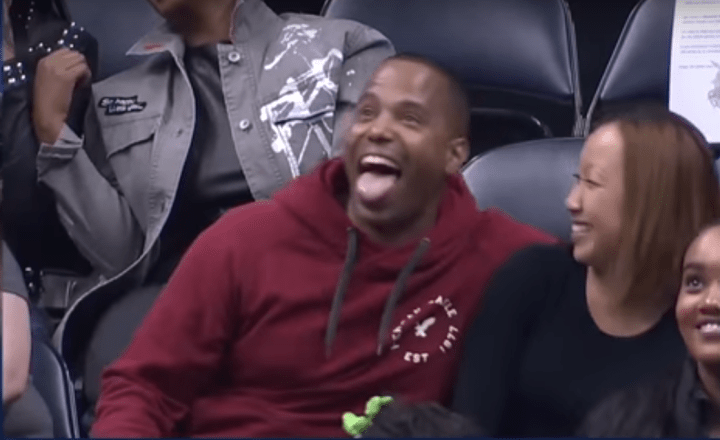 At the World Junior Ice Hockey Championships in Toronto in 2016, one Slovakian fan showed the world his one true love: his beer. Yep, as his girlfriend went to take a kiss cam selfie, this bloke casually locked lips with his plastic cup instead. And then he skulled the whole thing. Legend.

Okay, I’m sorry, the Atlanta Hawks just have all the best Kiss Cam canoodles: here we present to you 14 seconds of a woman enthusiastically eating pizza – a slice in each hand – in the background of a sustained snog, back in 2016.

Because life is #BetterwithaKiss, Medibank are bringing their Kiss Cam float black to Sydney‘s Mardi Gras Parade on Saturday March 3 – so every last one of us can publicly declare our love for our friends, family, partners, heck, even complete strangers, with a messy (or very polite, that’s up to you) pash.

Not going to lie – my favourite part of Kiss Cam footage is the moment just before its subjects realise they’re in the spotlight. Don’t be caught off guard! Pucker up for the Medibank Kiss Cam and share your snog on the big screen.

Not sure how you’re going to make it through the biggest Mardi Gras ever (do we need to remind you that CHER is coming)? Calm yr farm, Jordan Raskopoulos is here to help.