Video game streaming is quickly becoming all the rage with streaming portal Twitch, shoring up as the frontrunner site for broadcasting your gaming.

Not just a way to pass the time and show off your pew pew prowess, many Twitchers are getting to the point of making actual god damn income off of the thing.

Still a newish platform, Twitch can be a bit intimidating to first step foot in, so we hit up local Twitch pro Steve aka Reapz316, to help you reach your streaming dreams. 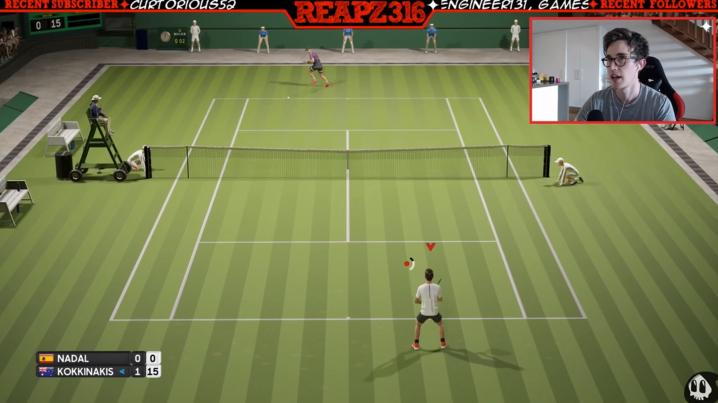 A screenshot of Steve’s Twitch.

What tech/programs do I need to stream gaming?

If you have a Xbox One or PS4 you already have a system that can stream. Granted, it’s not highly customisable but you can stream. Simply download the twitch app and go to ‘broadcast’, it’ll guide you through the steps.

If you have a PC and want to stream there are a variety of programs you can download but the most used is a free software program called ‘OBS’ (Open Broadcaster Software). OBS is highly customisable and regularly updated and is my own personal choice.

Xsplit is another program of choice for a majority of streamers. This program is more intuitive than OBS with a great user interface but does come at a cost of a license. So this is all dependent on your budget. Elgato products and their game capture hardware also come with a nice program to stream (and record) your gameplay.

Twitch is an evolving medium. It’s one thing to just stream but chances are if you don’t have a hook or eye grabbing presentation most people will go elsewhere. So let me try and break this down in an easier format.

If you just want to do this as a hobby and not worry about viewers then you can really experiment. You could use a name generator if you wanted. Hell, you could even stick to the default avatar. Do what you do and see what sticks.

However, if you want to commit some time and effort with aspirations of doing this part or full time then I suggest taking more care. If you look at all the big Twitch streamers out there you’ll notice one thing in common… they have a hook. Dr. Disrespect, Timthetatman, Sodapoppin, Loserfruit. They have a creative and clean overlay with all relevant info in their panels below the stream. Their display names are non-offensive, they’re active on social media, they talk to chat and most of all they’re entertaining. 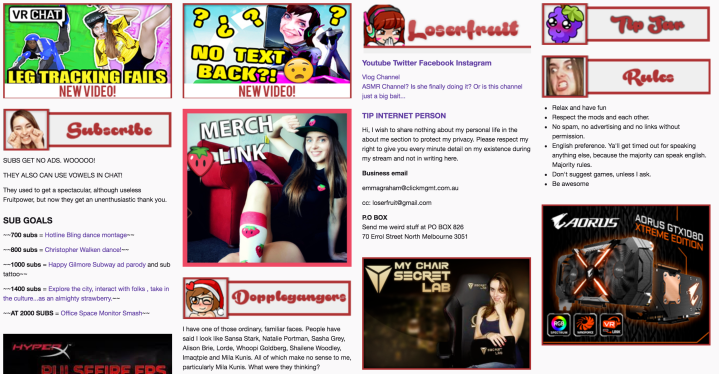 The best thing to do is watch other big twitch streamers. What have they done to make you watch? What is different than the other streams you watch? What are their alerts and presentations like?

Now think about your own channel. How do you want to be viewed? I’m sure you’ll want something that’s eye-grabbing and separates you from the pack. If you’re good at Photohop, you’ll have a blast exploring this creatively. If you don’t have the time but do have the budget there are many services online that offer this and do a great job at it.

Just know, if your username is xXPussSlaya420Xx you may not get the audience you’re after. Just think of how you want to be perceived and try and express that through your channel.

How do I get initial followers/viewers?

This is the eternal question. People have succeeded on Twitch due to a gimmick, their personality, are known successfully elsewhere in life, one of their clips blew up, got hosted by another big streamer or simply just luck.

But what if you’re just starting out? Here is what I would suggest if you want to grow.

Create a schedule and stick to it – If you can only stream once a week, that’s fine. But you have to let people know when. Advertise this on your channel and your social media platforms.

Keep Talking – This may seem odd but you have to keep talking when streaming. Why? Imagine if you wander into a smaller streamer’s channel and it’s just absolute silence. You wouldn’t feel inclined to chat in there. But if you’re engaging and commentating on what you’re doing and thinking then you project that type of atmosphere. Believe me, when I started I had absolutely zero viewers watching me and I must have seemed quite odd talking to myself but it works!

Engage with your chat – Twitch is an interactive medium. This is to your benefit. If someone comes into your chat and takes time to type to you, they’re obviously wanting a response. There’s so many times I see streamers so focused on their games for an extended amount of time that they simply forget and ignore the people they’re streaming for in the first place. Always be active with the chat. You’ll meet some amazing people and make some great friends.

Stick with your format – Most people will think they can start a channel, play some PUBG and immediately have people watching them. Unfortunately you’ll learn quickly that this won’t work. Twitch is already an over-saturated medium and to get viewers you’ll need to look into being consistent. Rome wasn’t built in a day. Sticking to your format is pivotal. People who follow you are mostly following you because this game or format appeals to them. When starting out, if you keep chopping and changing formats or games, people will drop off. It’s like tuning into Game of Thrones one week which is based around fantasy and then the next week it’s a romantic comedy. Soon you will shine through and they’ll tune in just for you and not the game.

Stream what you love – A question that is often asked is ‘What game should I stream?’. There is no right answer. Some games blow up and then everyone starts playing it and you’ll have to scroll through hundreds of other streamers just to find yourself near the bottom of the list. Don’t feel pressured into playing the current hot games if you don’t enjoy them. People will enjoy your stream more if you’re having fun. Plus you’ll likely be more easily found playing a game that is more niche or a little older. And trust me, there are a lot of people that will still want to watch it.

Social Media – A big tactic these days in Twitch is to clip a highlight of your stream and then put it out on the world wide web. This will help you attract people that may not have been watching you live. So many people I know have blown up their channels this way and you should definitely show the world why you’re worth watching.

Be Positive – Twitch, like anything you do, will have it’s highs and lows. Stay positive! There may be days when no one watches you or you didn’t get any follows. This happens to all of us. The main thing is to stay positive, focus on what makes you happy when streaming and keep going.

Opportunities – Follow the Twitch ANZ twitter for starters. I was lucky enough to be chosen to be a part of a program called ‘Grassroots’ which showcased me on the front page of Twitch ANZ for 2 weeks. Twitch is always looking at ways to give more coverage to smaller viewers, you just have to seek them out.

How often should I be streaming to capture an audience?

It’s really quite simple, if you stream a lot (4-7 days a week) you will have more traction, more people coming into your stream and more of a following. This also depends on how big of an audience you want. However, don’t get burnt out and end up hating streaming. This will shine through and detract from not only your audience but your own well-being.

A huge mistake is to pursue this full-time off the bat, because you will barely make any money. First, create an audience and then see if it’s plausible.

Personally, I stream 3-4 times a week from 2-6 hours. This is as much as I can do while juggling two jobs without burning myself out.

What should I be doing during a stream?

As stated before, always be talking about what you’re thinking, feeling or doing and interact with anyone who comes into stream. You will get trolls and the best way to deal with them is to just ban them (you are in charge and this is your channel after all). This is a LIVE and INTERACTIVE medium. You need to react and engage with people who come in. They’re the ones who will fuel you to keep streaming and they will keep coming back if you’re good to them.

Now one of the biggest streamers in 2017 was a guy called Dr Disrespect (currently on hiatus). He basically changed the twitch meta by bringing various set changes, catchphrases, a character driven experience and TV standard production to the live medium. He currently has over 1.5 million followers. 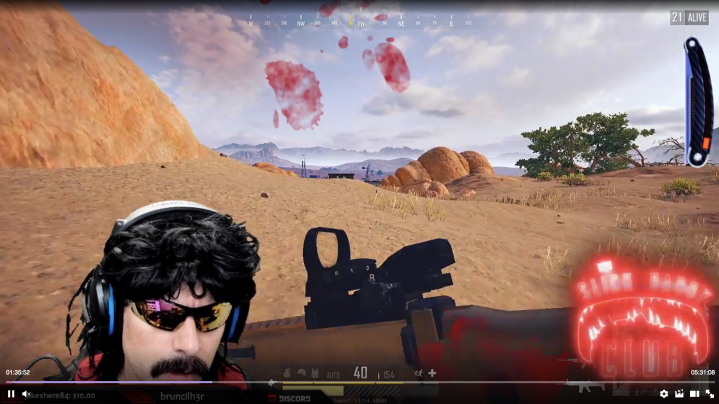 A screenshot from Dr Disrespect.

Now, we can’t all do that but what shone through is how different it was from other streamers and how much thought went into what he’d do on stream to make it engaging.

If you’re very serious about pursuing this as a future career, think about what you can do creatively that will be different from other people out there. I’m not saying to create a character but what makes you more worthy of a view over someone else? Think outside the box.

What games should I be playing?

When you are starting out, I would stick to a game that isn’t in the top 10 games that are currently being broadcast on the ‘Browse twitch’ section. Why? All those games already have viewers that are watching the big streamers. You are competing against people who have been on Twitch years longer than you and have already established a base.

Now, I’m not saying you should only play the same game for the rest of your twitch ‘career’ but being consistent with one game will get you more followers, ones that will stick with you. When a new game comes out that looks intriguing to you, jump straight in. There are always opportunities to expand and claim this new game as your new ‘base’ game.

Also, most people don’t know this but you don’t need a game to be successful on Twitch. Twitch has many categories that allow singers, artists, entertainers and hosts to bloom. Simply look under the ‘IRL’ and ‘Creative’ sub categories to see what I’m talking about.

Any other general tips?

If you’re starting out, ask your friends or people you may know online to stop in and check out the stream. Make the people you trust as mods. They will keep the chat flowing when you’re not there and help out if anything untoward happens.

Basically, only stream if you actually want to stream. Streaming isn’t for everyone and you’ll know if it’s for you once you start. Just keep a positive attitude and never be afraid of taking breaks or time off.