Granted, it must absolutely SUCK to pour your heart and soul into an album like Ariana Grande has no doubt done with Sweetener, only to have sneaky ass fans leak your work. I get it, that must blow. And ffs it’s gonna be released in two days, just wait 48 hours and fork out $$$ to support your idol.

But bullying is absolutely never called for, especially when it’s aimed at someone who worships you.

The ‘No Tears Left To Cry’ singer has been called out after posting a series of nasty tweets where she mocks a fan for sharing a photo of her fourth studio album.

Here is the tweet that kicked off the whole mess:

And here are Grande’s viciously worded responses, one of which was deleted after posting so mind the screenshot.

i mean if somebody’s gonna leak what my hard copies looks like please handle this first ….. please. this music is….. too good for this. pic.twitter.com/as2fcqQG5R 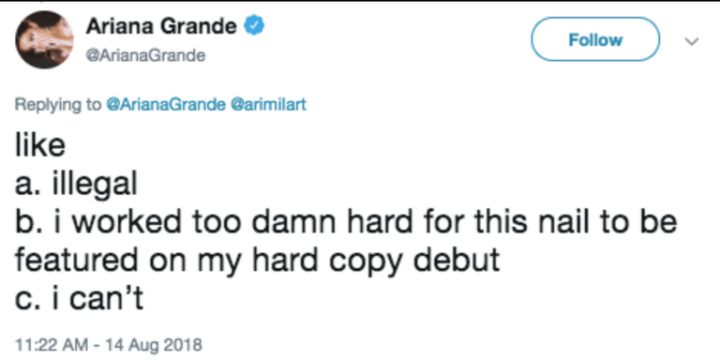 As other fans joined in on Grande’s tirade, she thanked them for their support.

She went on to share the link to the leak site and tagged TMZ so they knew where it was coming from.

yo i found the link to the leak https://t.co/o3UsUHDrb6 there’s two check this one too https://t.co/fBvTUjaihY

After Grande’s rant drew the attention of Arianators everywhere, a lot of them took their queen’s side (of course) but many disagreed with the singer’s approach to the situation and have labelled her a “bully” for the way she tweeted about the stan.

Try again sweetie Ariana is dragging her fans and acting like a total hypocrite and bully. This Era “issa” flop, when she acts like this she knows damn well her fans will bully who ever she “calls out.” Ariana says she spreads positivity but seriously making fun of someone’s

Did you just bully a fan??? Wtf Ariana

@ArianaGrande okay that's fucking disgusting. how dare you bully fans, even though the leak is fake. you're turning into a monster. alexa play fuck you by lily allen. pic.twitter.com/0tJhqpZw1n

u said it was “jus a joke” but no. bullies always say this.

Is Ariana Grande a bully now??

Did yo- just bully your fan? I- wtf is wrong with you

In summary: buying leaked media is an absolutely shit thing to do but ya what else is shit? Bullying people on Twitter and encouraging your thousands of followers to join in on the hate.

As my good pal Harry Styles preaches on the reg: TREAT PEOPLE WITH KINDNESS.