Snoop Dogg, the rapper who loves weed more than all other rappers and has the biggest heart, has reportedly offered to adopt a rescue doggo, a Staffordshire bull terrier also named Snoop, from the RSPCA in Great Britain, as Daily Star writes.

Snoop the Dog was dumped in the English city of Stoke-on-Trent, 369 kilometres northwest of London, a week before Christmas (!!!) on December 17. V. upsetting CCTV footage from a nearby home showed a man walking the dog to the other side of the road, unclipping his leash, and leaving him stranded there with his doggy bed.

The footage went viral in the UK last week when it was released by the RSPCA in an attempt to track down the couple responsible. And it is deeply distressing, the dog pawing at the cars’ doors and chasing after the vehicle as it attempts to drive away. What kind of MONSTER would do that to a perfectly pure good boy like Snoop.

He was found – and dubbed Snoop – by rescue staff who found him in a basket by the road.

The BBC reports that RSPCA have said that “hundreds of people want[] to rehome” Snoop the Dog – but he’s not yet up for adoption while the charity investigates the dog’s abandonment. When he is, and you’re in the UK, you can apply to adopt him at RSPCA’s Find a Pet database. Here is the Aussie version if you’re in the market for a beautiful rescue fluff.

The Daily Star asked Snoop Dogg what he thought of the video, and the ‘Drop It Like It’s Hot‘ rapper said he’d take the forgotten boy home to “Casa de Snoop” in a second.

“It is heartbreaking. There is always room for another dog in Casa de Snoop. If he really needed a home then he has one with us. But I don’t think there is going to be any shortage of loving homes after all the exposure he has got.”

Here is a gorgeous picture of Snoop, which no doubt spurred Snoop the Man into making his offer. 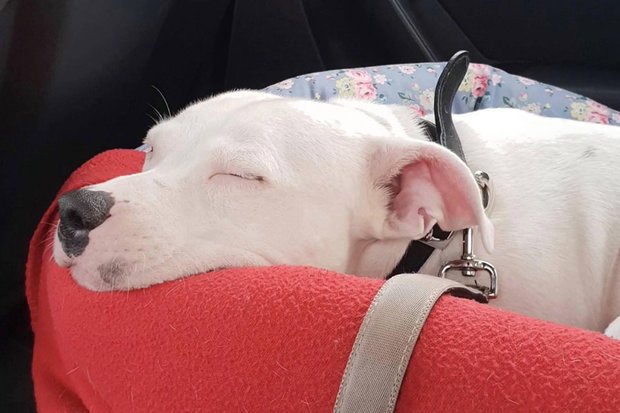 READ MORE
Meet Sniffles, A Senior Pup With No Nose Trying To Find A Forever Home

An RSPCA spokesperson spoke more about the character of Snoop the Dog who deserves a home to the BBC, and if they wanna pay for flights we at PEDESTRIAN.TV will take him, I swear I’m allowed to make that offer.

Snoop is such a loveable character and enjoys being around people and gets on well with other dogs. He just loves getting close to people, sitting between their legs and having cuddles, and is certainly enjoying lots of love and affection from our staff.

We have been overwhelmed by the hundreds of supportive messages for Snoop and all the people who have offered to give him a home, including some well known faces such as rapper Snoop Dogg, comedian Sue Perkins and journalist Andrew Neil.

Happy to add my name to the adoption list. He is gorgeous and I'll give him a loving home in a heartbeat.

So disturb by this footage. I say to rspca. If you have trouble rehoming this little dog. I will take it, gladly. https://t.co/gG723A1zrw

READ MORE
The Treasurer Mentioned A "Scoop Dogg" (?) Twice On 'The Project' Tonight