Hey, Remember When We Were Encouraged To Get Our Dicks Out For Harambe

No animal – living or dead – has had as big an impact on society as dear old Harambe, in my humble opinion.

In fact, the gorilla’s untimely death in 2016 galvanised an incredibly vivacious global online movement, one that had arguably never been seen before. What remains fascinating about #HarambeGate to this day is the way in which the tone of the Harambe conversation shifted from one based solely on mourning the loss of a martyr to one about, well… dicks.

So, as the 2010s come to a close, I think it’s time to revisit one of the oddest moments of the past decade – that time we were literally encouraged to get our dicks out for our favourite gorilla.

For those of you forgetful souls, let’s discuss how Harambe became the internet’s meme martyr. (Warning: it’s low-key sad and will make you not want to whip your pee-pee out.)

READ MORE
Someone Forked Out Over $130,000 For A Cheeto That Looks Like Harambe

On May 28, 2016, a 3-year-old boy fell into Cincinnati Zoo’s gorilla enclosure – a couple of members from the public had overheard the boy, prior to the incident, telling his mother that he’d wanted to enter the habitat.

While the two female gorillas retreated back inside upon orders from zoo officials, Harambe, a curious male silverback, moved towards the now-crying boy.

Harambe then became super agitated by the crowd’s commotions, began dragging the screaming boy around for 10 or so minutes, and was inevitably killed after being shot by zoo officials. He died instantly, the day after his 17th birthday.

The footage (which is still all over YouTube but I’d highly recommend not to watch because it made my heart sad) subsequently went viral, amassing millions of views within the first 24 hours.

Was the enclosure to blame? Maybe. The mother? Who knows? Harambe? Absolutely not, the internet agreed, as he was merely being himself. Besides, he’d been held in solitary confinement his entire life and, even then, he wasn’t safe.

It wasn’t long before Harambe’s death began trending worldwide – several vigils were held, and the univocal demand for justice over the slain endangered animal became palpable across the internet.

That was until July 2nd, 2016, when Twitter user @sexualjumanji posted this avenging selfie: 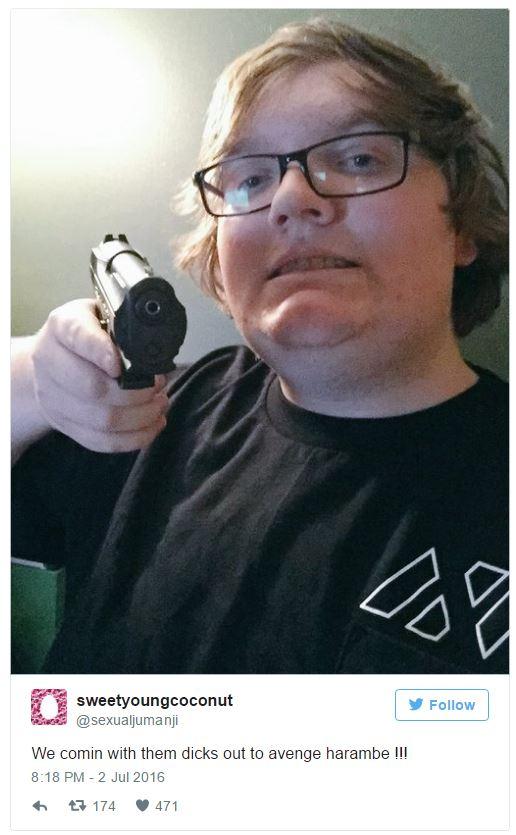 A couple days later, comedian Brandon Wardell was the first to tweet the now-infamous phrase.

Wardell subsequently posted a couple of vines regarding the act of revealing one’s genitalia in commemoration of the blessed gorilla, including a viral vine with none other than with Danny Trejo.

And that was it. The movement had begun, thanks to the Trejo vine being submitted to Reddit. “Dicks out for Harambe” catapulted across social media, with various subreddits and Facebook events garnering millions of clicks, comments and shares. The internet was now in unanimous agreement – it was simply imperative to get one’s shlong out in solidarity with sweet, sweet Harambe.

To be honest, in hindsight, the whole ‘dicks out for Harambe’ rhetoric was low-key so fucking odd. (I mean, a conversation around the death of an endangered animal turned into a worldwide discussion of dick.)

But when you think about it, ‘dicks out for Harambe’ had nothing to do with Harambe and everything to do with the internet’s obsession with turning a sad situation into, well, weird, viral shit… and also everyone’s love for genitals.

And ike most viral shit on the web, it’s something that should never be taken seriously. So, please, in solidarity with our king, consider getting your symbolic, nostalgic dicks out this New Year’s Eve for Harambe.

Also, stream “Dicks out for Harambe” for clear skin and exposed dicks.

READ MORE
Of Course Kyle & Jackie O Asked The New 'Bachie' About His Dick, If You're Interested