You know how when you go to the airport, or on public transport, or you travel anywhere where you might hypothetically be carrying luggage, there’s all these signs about urging you not to leave your baggage unattended. And if you were to leave your stuff somewhere, authorities would approach it with extreme caution.

That’s the position the Australian Federal Police found themselves in when they found a free-roaming, pink Lorna Jane bag in the women’s loos last night, as the ABC reports. They did the responsible thing: they called the bomb squad to look into it. And what did the bomb squad find but this one-year-old dwarf rabbit: 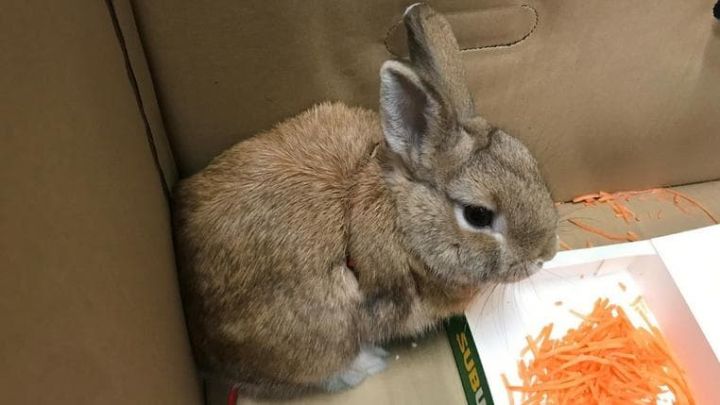 WHAT A CUTIE PATOOTIE.

The rabbit was found in a red harness, but without a tag or anything to identify it. So the AFP did the next logical thing: they hit up RSPCA SA, who took their new bunny bro back to their Stepney HQ with them for an overnight stay in a warm cage, like a hotel for rabbits, but without the whole bottles of champers in a spa bath thing.

This is the first job of this kind that I’ve come across in my 26 years of service with the RSPCA.

The young male rabbit is clearly very-well socialised and cared for.

“He is even harness-trained. The police had put him in a large box and [got] some carrots from Subway, so he had some fresh shredded carrot to munch on while they waited for me to arrive.

It is deeply satisfying to imagine AFP officers approaching a teenage Subway employee to ask for carrots to feed their new bunny buddy.

We treat everything in the aviation space very seriously, but our bomb appraisal officers certainly weren’t expecting to find a rabbit in unattended baggage.

Thankfully, the rabbit is safe and well and hopefully the owner will be found.

For now, we are left with a number of incredibly obvious questions: Who brought their rabbit to the airport? Who LEFT their rabbit at the airport? Isn’t it just normal to check you have your phone, keys, wallet, passport, RABBIT before you leave literally any place: the house, the airport, a booze-up in town? Most of all: WHY?

For their part, the RSPCA reckon the owner of their new bunny BFF was either leaving the country and wanted to leave their pet somewhere it would be found and cared for, or they chickened out of smuggling him onto their flight. Both v plausible theories.

But as The Advertiser notes, the RSCPA would like to make it VERY CLEAR that you should not try this for yourself. If you’re unable to look after your rabbit anymore, please take ’em to an animal shelter during opening hours.