G’day Sports Fans, Here’s The Highlights From The 2018 Puppy Bowl

It’s that time of the year again, folks. The good day. The time where a bunch of NFL fans start drinking at 9am and run around yelling “FOOTBALL” and other football-related words. But forget about all that sports stuff, the real main event(s) today are the Puppy Bowl and it’s counterpart, the Kitten Bowl.

Hell freakin’ yeah, it’s prime time to watch a bunch of adorable animals muck around in a miniature NFL stadium, in one of the most popular adoption drives in the whole damned world.

A bloody piano-playing chook opened the Puppy Bowl with the US national anthem, there’s a hamster on a wheel powering the lights, there’s piglet, duckling and bunny mascots, it’s a whole thing.

If you’re not familiar with the Puppy Bowl or Kitten Bowl, basically a bunch of wee babs are brought in by volunteers from animal shelters, they’re split into teams (yes, they have their own players stats and cards) and popped onto the field with a heckin’ big load of toys and left to battle it out for top dog/kit.

Points are scored by toys being carried by players to their respective endzones, but idk how accurate it all is considering the newest ref is a god damned SLOTH.

In the Puppy Bowl, Team Fluff beat out Team Ruff 52-47, with many great plays and smart tactics. In the Kitten Bowl, the Little Longtails and Pouncy Panthers took out the big wins, but let’s be honest the real winner here is everyone.

The newest inclusion into the event is the first-ever Dog Bowl, where pups over the age of two get to play against each other while also reminding folks looking to adopt that there are so many older animals who are also looking for their forever homes.

Also the Underdog Award for the Puppy Bowl was awarded to Mr. Wigglesworth and oh god would you just look at that face? 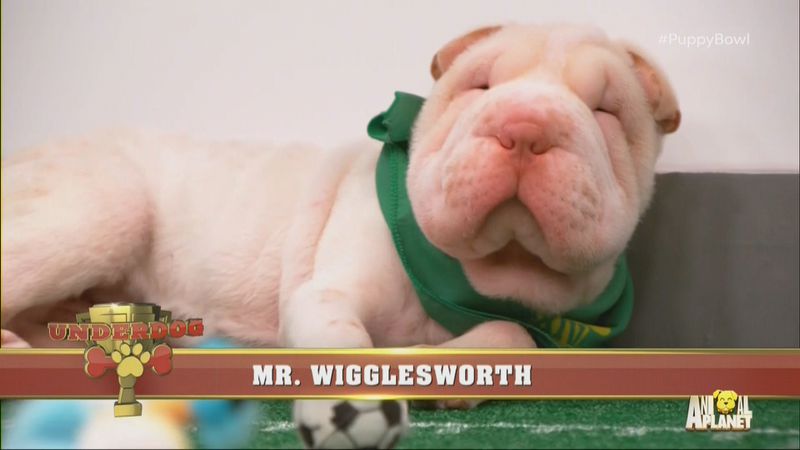 Now I guess you can go back to the big human game happening now, but know that these very good boys and girls have already won the championship ring of my heart.